Stumbling upon a Treasure in Jerusalem | Meridian Magazine

Stumbling upon a Treasure in Jerusalem

We gave our daughter a necklace from Jerusalem when she graduated from high school that had so much meaning to her, she has worn it nearly constantly since. When our friends saw it, they wanted necklaces like it for every woman in their families, too. Here’s why. 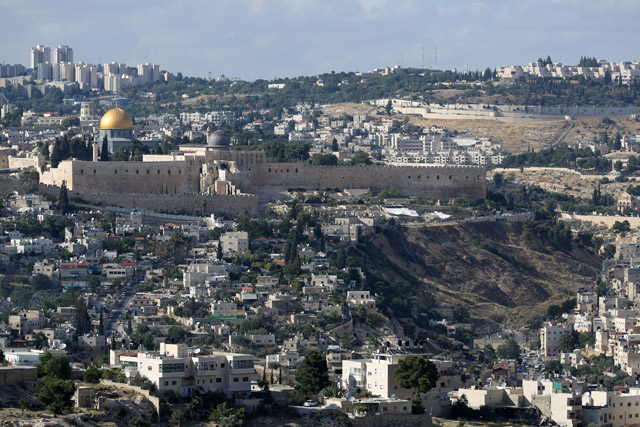 Jerusalem is a city of mysteries. Beneath its golden walls are layers and layers of civilization and lost there are relics of another time, almost another world. Still nothing is so sacred as the temple that once stood there where a covenant people worshipped and Jesus taught. It was destroyed and burned to the ground by the Romans in 70 AD, but it still stands with power in the mind’s eye of anyone visiting the Holy City.

Any small remnant found of that ancient temple and its symbol of devotion to God is a treasure beyond belief. Now, a few remnants are being unearthed. 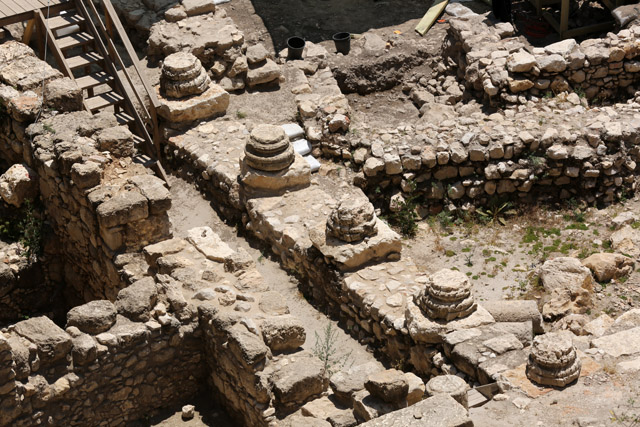 Just south of the city wall and the Temple Mount, a new excavation has begun. We’ve watched it with great interest, because the parking lot where we used to stash our car has disappeared and beneath it is a whole complex of ancient homes. Near that is the broad way traveled by worshippers that used to lead to the temple gates.

Two years ago in the rubble of another era, an extremely rare bullae from the Second Temple period was sifted out. A bullae is an ancient clay seal about the size of a coin, and hundreds of these are found, but this one caused a stir because on it were these significant words “deka leyah.” In Aramaic, this means “pure for God.”

Why did this one matter so much? This seal gave us a critical glimpse into ancient temple worship. This was a seal of purity required to mark any products that could be brought into the temple and used in worship. They had to be “pure for God” or they could not be brought into the temple, into that holy place. They had been marked, sealed, approved as pure, ready for the Lord’s house. Nothing profane was allowed there.

A familiar example is the oil jug from the Hanukkah story, which was sealed with the seal of the High Priest. Tradition has it that it burned the extra days needed because it was “pure for God.” 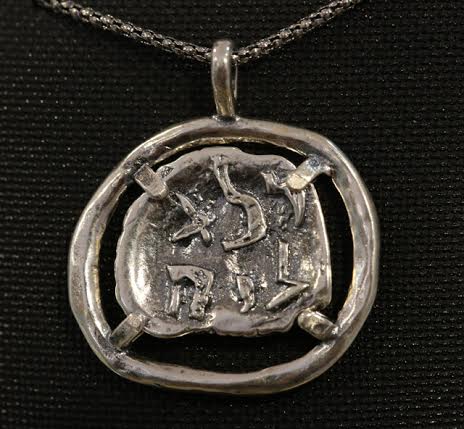 Now, at the City of David, a beautiful necklace has been made based on this bulla. They are “pure for God” necklaces. We were in love with them when we saw them because it reminded us that anciently the standard of being in the temple is the same as it is today. Not only did items that came into the ancient temple have to be marked with a “pure for God” seal, but, of course, the people had to be striving to be “pure for God” as well. Entering his presence has always involved sanctification. It is what is written on our souls as temple-attending Latter-day Saints.

Meridian has a limited-time, limited-quantity offer for these significant symbols from the Temple Mount in Jerusalem.  Click here to see.

All of us in our group suddenly wanted “pure for God” necklaces, as a something to wear, like a signature or a seal that marked what we wanted to be. Oh, it would be our heart’s desire to be “pure for God”. We knew that this ancient “pure for God” bullae had a unique meaning for us who were covenant people who attended modern temples. Like the seal, we had our temple recommends allowing us entrance.

Then came a moment we will never forget. In our group that day was Dr. D. Kelly Ogden, a speaker of Hebrew and BYU professor of ancient scripture. He looked at the inscription again and said that another translation of “pure for God” was “Holiness to The Lord.” We gasped with the resonance between the ancient and modern, of a God who is the same yesterday, today and always. We have seen the words “Holiness to The Lord” inscribed in gold on our temples and now we understood it better. 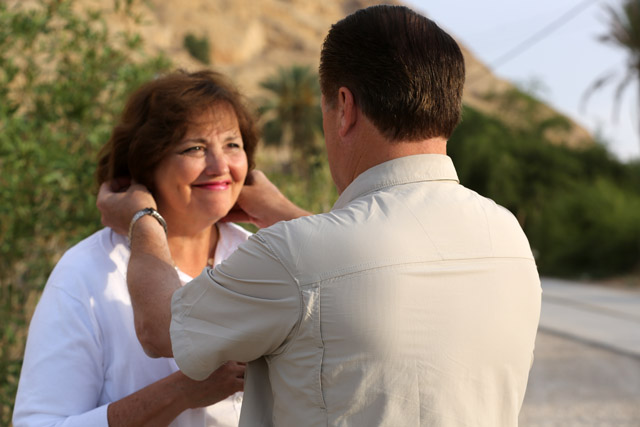 It wasn’t only the temples that were consecrated to His glory and holiness. The temples are His gift to make His consecrated, covenant people holy as well. Our attempts to become pure are our gift to Him as His children. We needed to become “pure for God,” and wear His gift like a seal upon our hearts.

We were truly stunned at how much meaning the “pure for God” necklaces had for us. Then later we received a tender mercy, a small blessing that seemed to tell our hearts that The Lord understood we had been impressed with His gift of a temple and the expectations He gives us to be “pure for God.”

Several months later we were leading a tour in Jerusalem and we took them one bright morning to a dig of Temple Mount debris. We were each given several buckets of dirt that we washed through a screen. Left behind on the screen when the water washed through were pieces of mosaic, plaster, bones, sometimes coins and various other debris. We divided these bits left on our screen into separate cups, looking for anything significant. Then a staff member would come by and check our work.

Each time he came by, we asked the young man checking our work what was the most significant thing he had ever found. He modestly demurred to answer. Still, because our buckets of dirt yielded so little of worth, again and again we asked him. “How long have your worked here?” we asked him. “Eight years.” “What is the most significant thing you’ve ever found?” Finally, he relented and led us through the groups of people rinsing debris, across a small plaza and to the office of the dig. He motioned toward a newspaper clipping from the Jerusalem Post hanging there on a window. “It was important enough it made the paper,” he said. “It was a bulla.”

“What did the bulla say,” we asked. He answered quietly: “Translated it means ‘pure for God.'”

It was one of those moments when we felt so personally that God remembered us.

Later we talked with the director of The City of David.

We told him, “It is not just that we love the “pure for God” necklaces. It is that they have meaning beyond what we can easily describe for Latter-day Saints.” We are meeting in his office because we want him to supply these necklaces for Meridian readers.


Finally, my husband Scot, has an idea. “You know,” he said, “how items, like oil, brought into the ancient temple had to be ‘pure for God’? We have temples that are holy to us as well. We have to be ‘pure for God’ in order to enter the temple. Our seals are this,” Scot said, and then showed him a temple recommend.

Light dawned in the director’s eyes. It was a moment of cross-cultural understanding about why our temples mattered to us the way the ancient temple had mattered to the ancient Children of Israel.

When our daughter goes on her mission to Zambia in July, amidst our tears at the airport, I know both of us will be reassured because she will be wearing her “pure for God” necklace. When another daughter and her young family just moved to Houston, I gave her a ‘pure for God’ necklace at the airport. It was to send my dearest hopes and love with her. We will give them to each daughter and sister in our family at the appropriate meaningful moment.

Now, we have a limited number of “pure for God” necklaces that you can buy through Meridian. They are more than decoration. They are a something to work for, a who we want to be. They are a perfect gift for a graduating daughter, a newly-called missionary, a granddaughter just getting baptized, your wife, your mother. If you’d like this as a gift to give someone you love, it you’d like to wear it as a seal upon your heart of your aspirations, click here for more details.

This is so interesting, I enjoy learning about archeology. Are you aware that there is another interpretation to the meaning of the seal and inscription? Hebrew University professor Shlomo Naeh says the object is a kind of voucher or token which enabled the Temple administrator to keep track of commerce related to sacrificial offerings. In Temple times, every animal sacrifice was accompanied by additional offerings consisting of flour, wine and oil, in varying proportions depending on the type of sacrifice. These offerings had to be purchased in the Temple to ensure they were kosher and pure. According to Professor Naeh, the newly-discovered artifact was used to track these transactions by indicating in shorthand the type of additional offering the buyer was entitled to, and the date on which he was entitled to it. In this instance, Naeh explains, the letters are an abbreviation of three words:

I read this lovely story and enjoyed it. at first when I saw the title I didnt think much of it...becuase I was raised catholic and we had medals etc. but as I read the story ..I began to feel a significance of this reminder of being pure and then I went a step further..what about our young men as well. young men wear medals ...I mean our soldiers use to wear dog tags with their information on it...it would be lovely to have these necklaces for the young women with their name and information on them on the back and the young men have their necklace look manly with the same. I would like one myself and will most likely get one. as a catholic I use to wear a scaplula which is made out of cloth and it had holy things on it and I wore it all the time. I would like this medal with my info on it on the back and it would be a statement of how I feel and what I believe in.