President Uchtdorf addresses symposium on the importance of history

Experts on the history of The Church of Jesus Christ of Latter-day Saints gathered in Utah for the two-day 8th annual Church History Symposium. The event, titled “The Worldwide Church: The Global Reach of Mormonism,” was held at Brigham Young University in Provo and at the Conference Center in Salt Lake City, Utah, Thursday-Friday, 6-7 March 2014. Speakers discussed the growth and impact of the Church outside of the United States, where it was established on 6 April 1830, nearly 184 years ago. 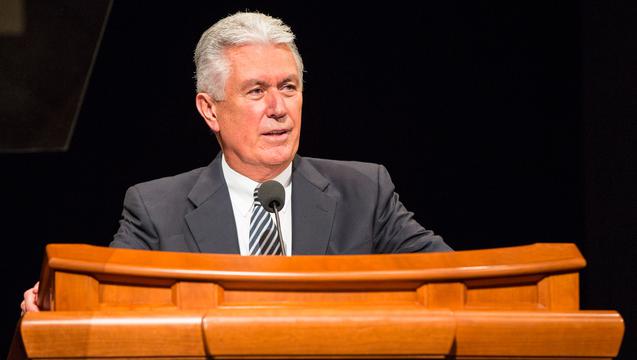 In a keynote address in the Conference Center Theater on Friday morning, President Dieter F. Uchtdorf, second counselor in the First Presidency, told the attendees that he welcomed the opportunity to participate in the symposium. “I felt like it was something close to my heart,” said President Uchtdorf. “And keeping ourselves anchored to the lessons learned from history will enable us to emulate the best of what it means to be human. It can also help us avoid the worst.”

President Uchtdorf used the metaphor of a leaf to describe our human view of the world. “One of the weaknesses we have as mortals is to assume that our leaf’ is all there is – that our experience encompasses everyone else’s, that our truth is complete and universal,” he said. “History teaches us not only about the leaves of existence. It also teaches about the twigs, branches, trunks and roots of life.” 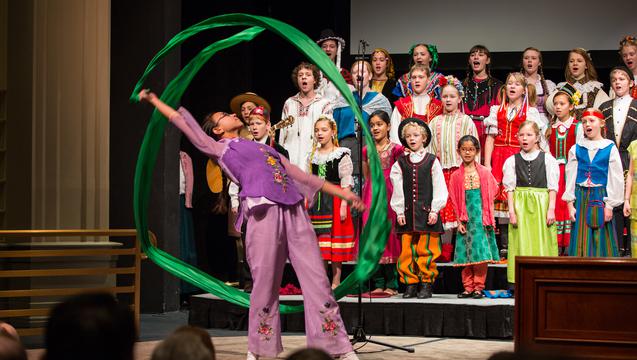 President Uchtdorf shared his experiences growing up in the Church in Germany. In a small branch of the Church in Zwickau, East Germany, he would sometimes work the bellows that supplied air to an old air-driven pipe organ. His family later moved to Frankfurt.

“Now, it is approaching seven decades since that small child sat behind the organ pumping wildly, trying to force enough air through its pipes so that the congregation could hear the beautiful music,” he reminisced. “I have seen the Church – leaf, twig, branch, trunk and root.  And though outwardly the Church appears different in the various areas of the world, I can affirm that it is of the same spirit and the same essence wherever you go.”

“From small seeds, great trees grow,” said President Uchtdorf. “From small beginnings, the Lord can work miracles in our lives.” He cited the small towns where Jesus was raised and the prophet Joseph Smith had his humble beginnings. “From these two unlikely and disregarded places – Nazareth and Palmyra – emerged two figures who would change the world.”

He said there is a need for faith, sharing his own uncertainty that there would ever be a temple in East Germany in his lifetime. In June of 1985, President Gordon B. Hinckley dedicated in East Germany the Freiberg Germany Temple as a house of the Lord, the first temple behind the Iron Curtain.

“God’s kingdom will continue to grow,” he said. “In our world today, we seek out the wise, wealthy and well-known. We honor their opinions and follow their research.” However, President Uchtdorf said that God teaches us not to place our trust in the wisdom of the world. “God sees infinitely more than we do.”

“The gospel of Jesus Christ not only encompasses all truth, but it specializes in the knowledge that will be of greatest worth to us in this life and throughout the eternities to come,” stressed President Uchtdorf. “One of the most fascinating things about this mortal experience is that there is so much to learn. Isn’t it a remarkable feeling to belong to a church that not only embraces truth – no matter the source – but that teaches there is much more to come! That God will yet reveal many great and important things pertaining to the Kingdom of God’ (Articles of Faith 1:9).”

He continued: “God is good and faithful, and He performs His work in ways that sometimes are not comprehensive to our mortal minds. He asks that we have a little faith, a little patience, and that we believe. He asks us to seek after Him and believe in His word.”

President Uchtdorf commended the audience for its efforts to keep a history of the Church and to encourage others to keep a record of their lives and their families. “This is a cause that is of great importance to God’s work and to His Church,” he added.

“We understand our knowledge is a work in progress, that the leaf we have before us is simply one microscopic snapshot – part of an infinitely vast forest of fascinating knowledge,” concluded President Uchtdorf.

On Thursday, Church history experts met on the BYU campus to hear presentations on the growth of the global Church and efforts to decentralize history preservation. Nearly 200 members of the Church are working throughout the world to preserve the records of the Latter-day Saints in their regions. Fifteen records preservation centers are operating in Church-owned buildings around the world, with other facilities being developed.

In the evening, Dr. Terryl Givens, author and professor of literature and religion at the University of Richmond, provided the keynote address at BYU. Givens said the Church’s membership is growing in many lands to the point that a majority of its members “may never know what it is like to step inside the Tabernacle or attend a Boy Scout Jamboree in Billings or EFY in Provo.” He added that “Zion” is no longer a singular place but wherever the Saints reside.