What was Job’s Final Trial? 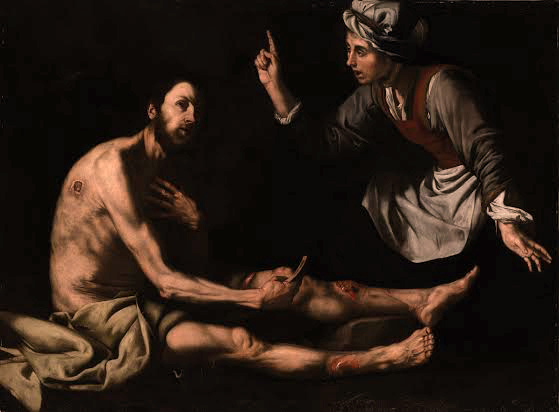 (This article is adapted from Rescuing Wayward Children. Follow this link to learn more.)

Besides the Savior, Job is often presented as the person who suffered the most. He suffered the loss of all his property, his children, his public esteem, the comfort of his wife, and his health and his friends. But what was Job’s final and most difficult trial that opened the door to deliverance?

Job was an ancient priest and judge, who was highly respected and very wealthy. He was doing everything right when suddenly everything went wrong. In a freak accident, he lost his seven sons and three daughters. Then he lost his wealth and his health. When he was cast from his home to take up residence near the city’s refuse pile, he was separated from his wife-possibly one of his hardest trials.

Then three of his friends (and later a fourth) came to comfort him. They were so astonished at his condition and appearance that they could not utter a word but rather sat with him in silence for seven days, “for they saw that his grief was very great.”[i]

Then the unimaginable happened. Job’s friends turned against him and accused him of sin. Evidently, they determined that nothing short of misdeeds and flaws in his character could produce such misery. They intimated that Job was now reaping the reward for his poor choices and bad conduct.

Of course, Job was not a sinner who was deserving of his trials. Do we sometimes make the mistake that Job’s friends made–wrongly believing that a person’s miserable circumstances are the result of the judgments of God? Or are we quick to harshly judge ourselves when we yield to temptations or make mistakes? In either case, we can become an enemy to our friends or to ourselves, much like Job’s judgmental friends, who stooped to accuse Job while he was suffering.

Amazingly, despite all of their false accusations and abuse, Job maintained his integrity. He knew that sin was not the cause of his affliction. How did he know? Because Job knew the Lord; Job knew when he was right or wrong before the Lord. He knew that repenting of an imagined sin was a waste of energy that was desperately needed elsewhere.

If escaping his circumstance were as easy as admitting to a mistake, Job would have gladly done so. But he had received no such divine communication, so he was duty-bound to maintain his integrity and wait for the Lord to deliver him and give him further instructions.

The Key to Job’s Deliverance

The Lord vindicated Job by chastising Job’s friends. Speaking to one of them, Eliphaz, the Lord said, “My wrath is kindled against thee, and against thy two friends: for ye have not spoken of me the thing that is right, as my servant Job hath.”

Then, in an extraordinary gesture to reach out to the friends and invite them to repent, the Lord commanded Eliphaz and the friends, “Therefore take unto you now seven bullocks and seven rams, and go to my servant Job, and offer up for yourselves a burnt offering; and my servant Job shall pray for you: for him will I accept: lest I deal with you after your folly.” [ii]

The final trial of Job was forgiveness!

After all that had happened to him, after all the abuse, could Job now forgive and pray for his friends?

At some point, and perhaps at many points along the way, we will have to forgive family, friends and ourselves. President Kimball stated, if we are able to forgive sincerely, we are “near to perfection.”[iv]

Our reward for having made this sacrifice-forgiveness is always a sacrifice of pride-will be much more than what was required of us in order to forgive: twice as much, in the case of Job, and even more in other cases.

In the early days of the restored Church, the suffering, forgiving Latter-day Saints were told, “And again, if your enemy shall smite you the second time, and you revile not against your enemy, and bear it patiently, your reward shall be an hundredfold.”[v] Perhaps the reward comes by our having learned to become a little more like God.

Struggling to comprehend the boundaries of forgiveness, Peter asked Jesus, “Lord, how oft shall my brother sin against me, and I forgive him? till seven times? Jesus saith unto him, I say not unto thee, Until seven times: but, Until seventy times seven.”[vi] That is, we cannot become sons and daughters of God without being able to forgive without limitation.

To emphasize this point, the Lord taught a parable that reveals something we must learn in order to become like Him-the capacity and desire to forgive endlessly, even when sins are severe and enormous:

Therefore is the kingdom of heaven likened unto a certain king, which would take account of his servants.

And when he had begun to reckon, one was brought unto him, which owed him ten thousand talents.

But forasmuch as he had not to pay, his lord commanded him to be sold, and his wife, and children, and all that he had, and payment to be made.

The servant therefore fell down, and worshipped him, saying, Lord, have patience with me, and I will pay thee all.

Then the lord of that servant was moved with compassion, and loosed him, and forgave him the debt.

Tragically, the man who received the king’s clemency for his enormous debt would not extend the same mercy to a friend whose debt to him was comparatively small.

Forgiveness–One of the Greatest Tests of Discipleship

We are citizens of the kingdom of heaven; we are the servants of the King who will require an accounting of us. Our debt of sin is massive, and we cannot pay it. The demands of justice are unbearable. We plead for the King’s patience and mercy, and because the King is compassionate, He is willing to loose us from our burden and forgive our debt.

But if we will not extend the same compassion to another debtor, we kindle the wrath of the King, who, as the parable describes, will deliver us to the tormentors until we pay all that was originally due.[viii] Our casually forgiving someone will not suffice; we must do so from our heart, the most sensitive and tender part of our soul. We cannot truly forgive and hold anything back. If we are not willing to do this, we commit the “greater sin.”[ix]

Because the trait of forgiveness defines Jesus, and because we must develop this principle of salvation to become like Him, He gives us multiple opportunities to learn it in mortality, often with those whom we love the most. Forgiveness is one of the greatest tests of discipleship. Being willing to forgive speaks to our desire to become like Christ, for by forgiving we lay the groundwork for the sinner’s redemption, as is evidenced in the story of Job.

The Christlike saint seeks to redeem and reclaim while Satan seeks to captivate and destroy. The withholding of forgiveness shackles the sinner in a form of spiritual bondage. Perhaps that is a reason why non-forgiveness is such a serious sin. We simply cannot be called saints if we do the work of Satan on any level.

On the other hand, sincere forgiveness closes the door on Satan, who would use the unsettled issue to destroy our souls and the souls of those who have offended us. Therefore, for the sakes of everyone involved, we must forgive.

Of course, forgiveness is a trait of God that is beyond the ability of the natural man. It is delivered to us as a spiritual gift from the Holy Ghost. We obtain the gift of forgiveness by pleading for it “with a sincere heart, with real intent”[x] (that is, with the real intention to forgive) and working for it until we have prevailed with God.

This article is adapted from Rescuing Wayward Children. Follow this link to learn more. Also, to receive a free copy of Portrait of a Zion Person, click here. Follow our Internet missionary project: www.gospelideals.org. And LIKE us at www.facebook.com/gospelideals.

Job never lost his family. In fact, after all his trials he was guaranteed that he would be reunited to his family. Just like each new child added to family is a huge blessing, Job was able to add to family. Job had the great ability to understand that this life was not the final destination.