Three months after a devastating typhoon struck the Philippines, relief efforts by The Church of Jesus Christ of Latter-day Saints continue in some of the hardest hit areas of the country.

Typhoon Haiyan struck the Philippines on 8 November 2013, destroying over a million homes and leaving more than 6,200 people dead. Mormons were among those who lost family members and homes. Disaster response has now turned to longer-term relief efforts as volunteers are learning to build homes for residents still without shelter. 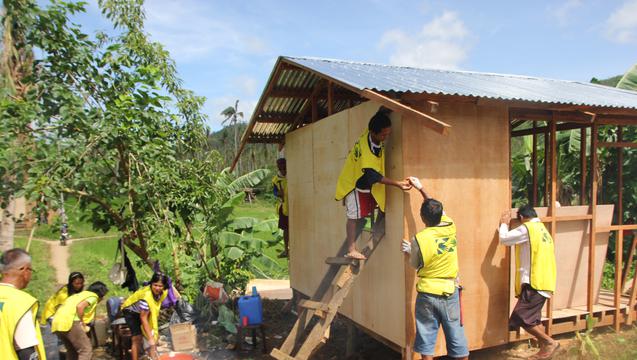 Presiding Bishop Gary E. Stevenson said President Thomas S. Monson and the First Presidency” directed humanitarian efforts to take place here” after viewing images of the destruction in the Philippines. He added they expressed “a deep love for the members of the Church and the members of the community in this devastated area.”

Bishop Stevenson and Elder Brent H. Nielson, president of the Church’s Philippines Area joined other local Church leaders in Tacloban recently, where volunteer workers in their yellow Mormon Helping Hands vests were building new shelters for those who have lost their homes.

They witnessed a home being built that will house a widow, her daughter and her grandchild. “We’re now a couple of months since the event, but there’s still so much that has to be done and so many people that don’t have a place to lie down at night,” said Bishop Stevenson. “They’re not protected from the elements.”

Ricky Gonzolez and Jenalyn Barantes took shelter with their families at a Mormon chapel when the typhoon hit. Barantes said her home was destroyed when coconut trees fell on it. She and her family did not have the means to fix it, but volunteers helped her build a new house, and she is now helping another family construct a home. “I learned to work together with those who are also in need here so we can recover from [the typhoon] together,” said Barantes. “We are happy that the leaders of the Church helped us.” 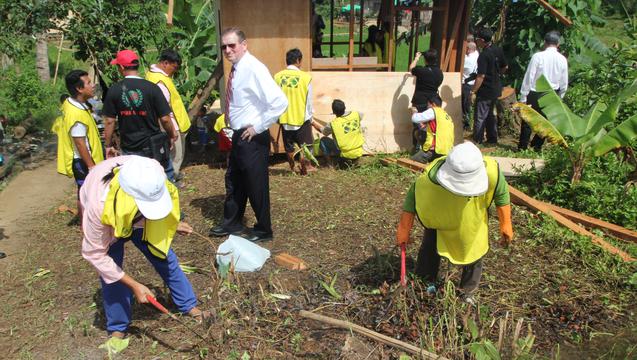 Gonzolez is learning how to build homes for his family and others after his home was destroyed in the typhoon and he lost his job after the business where he was working closed its doors. “We know we need to help one another so that work can be completed quicker,” said Gonzolez, who is grateful for the Church’s relief efforts. “I can say that they are very good and they are quick to respond.”

Bishop Stevenson said those who will be living in the new shelters are learning how to build the houses with materials provided by the Church. “We’re seeing both the principles of welfare, which is caring for the poor and needy, but we’re also seeing the principle of self-reliance in action right now, and it’s rather astounding,” he said. “One of the things that we’re trying to do is provide materials while [recipients] provide labor,” said Bishop Stevenson. “Anyone who is receiving a shelter is also working to build that shelter themselves.”

Local Church leaders and humanitarian representatives are meeting with local community leaders to give vocational training and certification to people who have learned carpentry skills, he said. “Some of these people are certifying to become carpenters so that they can take what they’ve learned in providing service and a structure, a shelter for this family, and provide that service, caring for the poor and the needy, but at the same time they’re learning a skill,” said Bishop Stevenson.

Government leaders in the area have expressed support for the shelter initiative. “And as we have had dialogue with the local governments, this seems to be the place that they are most anxious to see us because we’re out in front of everyone else,” he said.

Ten master carpenters have been brought in to assist with training through the Church’s Perpetual Education Fund (PEF). Local trainees will learn the trade and demonstrate their learning by building 10 shelters to receive government certification and a toolbox from the Church, enabling them to seek gainful employment.

Bishop Stevenson said there is currently a need for 250,000 carpenters in the Tacloban area, “with far fewer than that that are able” as the Philippines moves from disaster response to relief efforts. He reported 500 members of the Church attended a weekend conference meeting where ecclesiastical leaders described the job training and certification training. “And as this was described to them, they broke out in applause and tears, knowing that they could see a pathway, that in the midst of this destruction where they’ve lost their livelihood, they don’t have a way to provide for their families, that they now see a way to do that.”

“It’s an example for the members of the Church everywhere in the world to see their beautiful faces with smiles and faith and hope,” said Bishop Stevenson. “And so we can all learn from this. They have a spirit that is just remarkable.”

More than 90 Mormon missionaries are now working in the area and will take part in relief efforts. The Philippines Tacloban Mission was temporarily closed and many of the 204 missionaries were reassigned to other parts of the country when the typhoon severely damaged the area. “They will be doing what they have been called to do, which is to invite all to come unto Christ,” said Elder Nielson.

“However, they will also be performing service for members of the Church and others in the local communities as they rebuild their homes.”

The Church has also worked with several other charitable organizations as well as the Philippine government (since December) in a continuing effort to deliver supplies such as food, water, medical supplies, hygiene kits, generators, shelter kits, cooking kits, fishing gear and seeds for planting. The Church is assessing ways to further extend relief efforts to help the Filipino people while continuing to work with the country’s local and national governments.