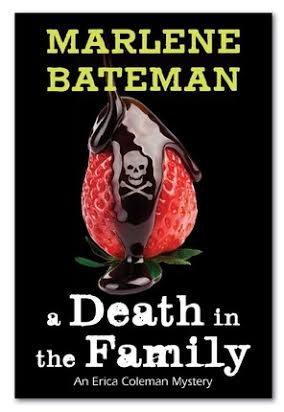 Marlene Bateman has a second novel out in her Erica Coleman Mystery series called A Death in the Family. Erica is an unusual private investigator. It’s not that she’s female or that she’s a former police officer; it’s because she’s so extremely OCD she drives everyone around her crazy. She’s also a great cook who follows every recipe in exact, precise detail. (The recipes are included at the back of the book and even this writer, who doesn’t see the point in mixing mysteries and cookbooks, thinks they look pretty tempting.)

Erica, her husband, and children are visiting his grandmother in Washington for a celebration of the older woman’s eighty-first birthday. Grandma Blanche confides in Erica that she has some concerns about something to do with the family business and asks Erica to investigate the company. When Blanche is murdered, Erica determines she will find out who did it and the matriarch’s will invites a great deal of speculation and family disputes. It’s not fun for her to investigate family, stirring up resentment and hurt feelings as she goes. Soon after, another family member is killed and Erica becomes the victim of an attempted hit and run accident.

Erica’s excessive OCD extends to carrying around wipes to wipe down every car she rides in, wearing gloves to pet kittens, making certain blinds are pulled to the exact same length even in an office she only visits, rearranging figurines in someone else’s home, straightening magazines that lack a quarter inch of being perfectly aligned, and even borrowing a teaspoon of mayonnaise when she runs short for a recipe. Her attention to detail makes her a good private investigator, but she drives everyone around her (and the reader) a little crazy.

There’s a strong cross section of personalities in the secondary characters and since most are family members or long time employees, these family dynamics are important to the story. The author does well in creating both strong family bonds and the pressures placed on these relationships through doubt and suspicions.

Some readers will find the maze of clues, red herrings, and possible suspects a challenge, but die-hard mystery fans will quickly figure this one out. Even when the murderer is known early on, it’s still fun to follow the twists and turns and try to make sense of the motive.

There are ten pages of recipes at the back of the book.

A Death in the Family is Marlene Bateman’s third novel and second in her Erica Coleman Mystery series. Each book in the series stands alone and it is not necessary to read them in order. She has also published seven nonfiction books and has been published extensively in magazines and newspapers. She was born and raised in Utah and graduated from the University of Utah. She and her husband live in North Salt Lake.

A DEATH IN THE FAMILY by Marlene Bateman, published by Covenant Communications, 294 pages, soft cover $17.99, also available in audio and for e-readers.

I loved her first mystery. Great writer. Can't wait to read the next.