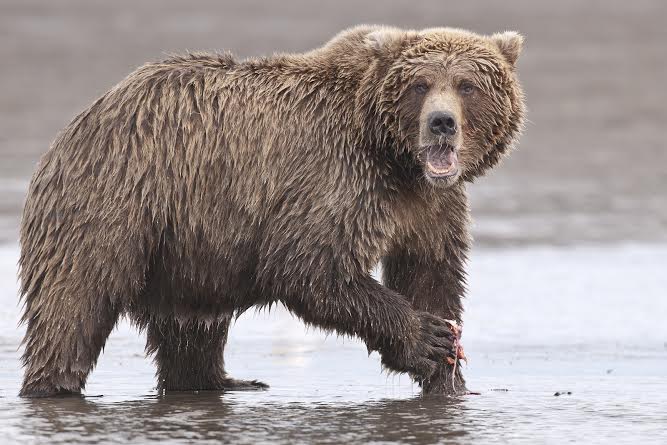 The story on the radio said that scientists are concerned about lead poisoning in bears.  Hunters sometimes shoot an animal only to have it get away, and die later.  These animals are then consumed by bears, who ingest the lead.  The report said that lead has been shown to cause behavior problems, learning disabilities, and personality disorders in children.

The obvious conclusion to this is that, if the situation persists such that bears continue to consume lead, we will have a generation of bears that cannot pass the ACT test and therefore will not be admitted to college.  This brings us to the question as to who plans to get close enough to the bears to interview them and find out if their learning ability has been hampered, and how would we know if their grouchy personalities were not in order anyway?

I have a friend and neighbor, John, who is a game warden, and an expert on bears.  He is often called to trap a bear that has gotten itself into trouble rummaging through someone’s trash.  It’s obvious that we cannot allow bears to get into our personal garbage.  There is no end to what might happen.  They could find personal documents and possibly end up stealing someone’s identity and emptying their bank account and running up their credit cards.

Thus, when a bear is found going through someone’s trash, John is called to educate the bear and put him into trash rehab.  The problem is, it is almost always the same bears that are repeat offenders.  Even after they have been through rehab, the bears tend to fall off of the trash wagon, and regress to their trashy ways.  So, when John was called to capture a bear, in the same area he had been called to many times, he was not surprised.  He was even less surprised to find out it was the same bear he had trouble with in times past.

However, this time the bear saw him coming and quickly made its escape.  Though it didn’t go far, it made it across the border into Wyoming.  Not having authority in Wyoming, John called the main office.  They contacted Wyoming, who said all of their officers were currently tied up on other assignments and they would be very happy if he would go ahead and trap the bear.  John was issued the permission, and the trap was set.

For those who have never seen one, a live bear trap looks like a giant culvert with gates at each end.  This is filled with stinking, rotten food – the smellier the better.  John filled it with rotten tuna, rancid meat, and other putrid animal byproducts.  The stench was enough to make a person lose their breakfast, even if they weren’t squeamish about such things.  But the smell has the opposite effect on a bear, making irresistible bait and it wasn’t long before John had his bear.  He hauled it the 50 miles over the Teton pass and into Jackson where he was to rendezvous with an officer from Wyoming.

He arrived at the designated point and pulled off the road to wait.  But it was to be anything but a peaceful wait.  Soon cars were lined up along both sides of the road as people came to get a glimpse of the captured bear, though they had to hold their noses because of the smell.  The bear, for its part, did not like the attention, and covered its eyes with its paws.

One wannabe cowboy came swaggering up, dressed in white cowboy clothes fresh from the most expensive western store in Jackson.  Even though John asked him not to, he got right up near the cage to mock the bear.  “Well, aren’t we a stupid bear?  Caught in a little pipe trap.”

Though John asked the man multiple times to leave the bear alone, the man pointedly ignored him and continued to harass it.  Finally the bear had heard enough.  He peeked through his paws and, seeing the man standing there at the end of the cage, prattling on about how stupid bears are, it reached down into the mucky sludge and swiped it out the end of the cage, drenching the man from head to foot.  As people fled in all directions to get away from the horrible stench, John thought for sure he heard the bear laugh.

Perhaps bears aren’t that stupid after all.

Reminds me of a series of pictures I received a few years back titled Next time I'll take the pictures... Seems the bear, I suspect he may have flunked rehab a couple of times, was really ticked so instead of blasting off at a dead run he tried to join the guy on the top of the trap holding the gate open. Made for pretty spectacular dance steps and a great dive under a truck. Do humans were injured in the making of these pictures...LOL

What a fun article! Very clever and entertaining...even my kids enjoyed it!