A Virtual View of BYU 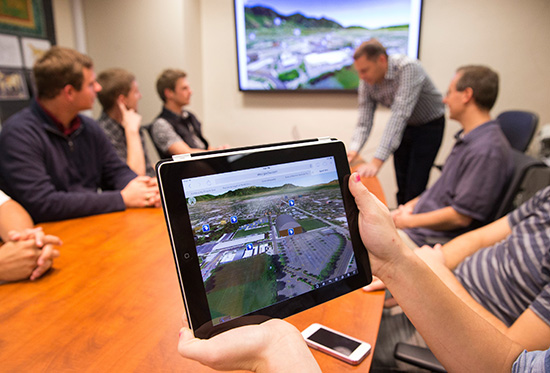 Before students ever step on the BYU campus, they – or anyone else in the world with an internet connection – can now experience a virtual tour of BYU unlike anything that’s been available before.

BYU students wielding cameras with fisheye lenses walked nearly every inch of the 560-acre Provo campus to capture images that they would then stitch together to create the tour. They also inserted a host of existing content into the experience, including embedded videos, social media plug ins, historical information and student advice.

There is even a game-like element to the tour, where users can collect hidden items to unlock prizes. This is much, much more than Google street view.

Experience the Tour For Yourself

“I’m a senior, and honestly, I was starting to get kind of sick of campus,” said Paris Sorbonne, an advertising student who served as the project manager on the virtual tour, “but there was this moment during this project when I thought I want to be here. This campus is just so beautiful. There is a legacy behind it. It’s changed lives. So that split second when I felt that, I thought this is what I want the tour to be about.”

The tour includes stunning visuals from all over campus and features many favorite spots and a few unique spots. Users can view LaVell Edwards Stadium from the 50 yard line, a sunset from the top of the Y and the inside of the Carillon Bell Tower.

The project to build the tour began in May and wrapped up just a few weeks ago. In six months, 15 BYU communications, theatre and media arts, information technology and music students came together and created a product that required hours upon hours of work and a unique level of collaboration.

“Our goal was to get totally different students working together,” said Jeff Sheets, director of the BYU Laycock Center, which helped organize the project. “This project really stretched the students and provided them with hands-on learning they wouldn’t have been able to experience otherwise.” 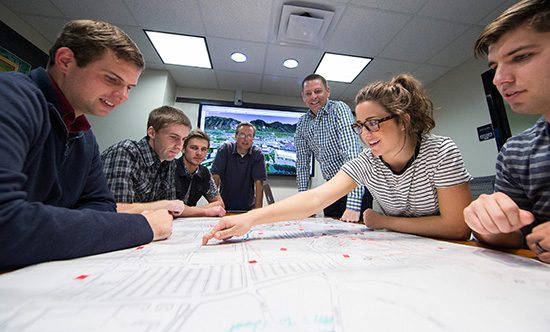 BYU information technology professor Derek Hansen specifically studies how social technologies and games can be used for the public good. Under his guidance, the students created the game-like elements within the tour.

“The creativity, dedication and resourcefulness of the BYU undergraduates who worked on the virtual tour was inspiring,” Hansen said. “Personally, it was enormously rewarding to see the scope and quality of the final tour.”

The idea for the virtual tour came when XplorIT, a company in California that specializes in 360-degree virtual tours, came to Hansen. They offered him the use of their technology if students would do the leg work of creating the tour of BYU’s campus. Hansen and Sheets created and co-taught a spring term course students could enroll in to participate in creating the campus tour.

“When I saw the class pop up, it was exciting,” Sorbonne said. “I was able to take this class instead of a management skills class. So instead of reading about it in a textbook, you’re actually learning it and applying it.”

For information technology student Robert Jackson, the project enabled him to learn valuable skills not typically associated with his field of study.

“It was presented to me as an opportunity to learn about a new technology,” Jackson said. “It sounded really cool and something fun to do. It turned out to be a lot different than I thought. As the IT student, I thought it would just be just coding things, but I was able to meet so many good people and learn a lot of new skills.”

Jackson and Sorbonne have continued to work together on new projects outside of the virtual tour. For Sheets and the Laycock Center, that’s a major outcome that he hopes students come away with from projects like this – the value of collaboration.