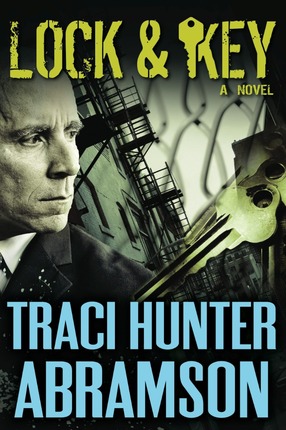 The Saints Squad is back with Lock & Key by Traci Abramson. This popular series continues with the newest Squad member, Jay Wellman, who has fallen in love with Carina Channing and is endeavoring to keep her and her younger sisters safe from her criminal family.

The Squad is a Navy Seal group that happen to all be Latter-day Saints. They’re stationed at Virginia Beach, but are assigned operations all over the world. Carina has brought Bianca to Virginia Beach to be near Jay and to have his squad members’ protection. She is the granddaughter of a notorious deceased mafia style crime boss. She and her sisters are caught in a power struggle between two of the old man’s sons, a cousin, and other family members. Her mother took the girls away into hiding years ago, then was murdered, and their father was charged with killing her.

Bianca, Carina’s sixteen-year-old sister, isn’t happy with the change in swimming coaches and the new high school brought about by their most recent move to stay hidden from the family. Making matters worse a bully has targeted her for his latest victim. Carina has more serious problems when her uncle finds her and makes serious threats if she refuses to turn over to him the key and message her father sent her from prison. She has no idea what lock the key fits, but knows she must not let it fall into the wrong hands.

Jay’s father, an Olympic swim coach, becomes involved and a young man befriends Bianca and they see a great deal of each other when both are accepted by Pete Wellman into his elite training group.

The action is fast and even seemingly innocent actions lead to serious consequences. Jay and Carina struggle not only to keep her and her sisters safe, but to discover what the key unlocks when their only clue is a picture postcard of Central Park and a short numerical sequence jotted on the card. The plot builds in a satisfying arc and the climax delivers the rapid-fire excitement and suspense readers will enjoy. Most of the characters were introduced in earlier books and are strong, intelligent people. Jay, Carina, and Bianca show growth and increase in strength and ability.

Traci Hunter Abramson spent her childhood in Arizona, went on to graduate from Brigham Young University, then was employed by the Central Intelligence Agency. She and her family live in Virginia where she coaches the North Stafford High School’s swim team. This is her fourteenth novel.