Ann Romney has written Much More than a Cookbook | Meridian Magazine

Ann Romney has written Much More than a Cookbook 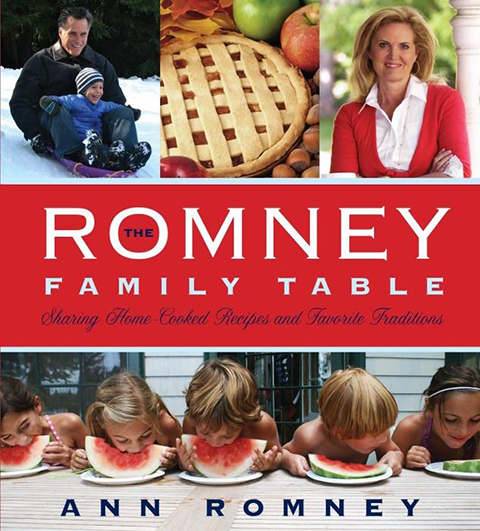 Ann Romney has been appearing in media and television this week celebrating the publication of her new book, The Romney Family Table: Sharing Home-Cooked Recipes and Favorite Traditions. Of course, journalists like to pick up on her little asides in the book that might make national waves like this one, “Mayor Bloomberg probably has Fluff high on his list of substances to be banned in New York City.’ Fluff is a marshmallow crme,” quoted in the New York Daily News.

What’s far more to the point, however, is that although Ann has packed her book with wonderful recipes, it is more than that. It is an affirmation of the joy and fun of family life and traditions. The book contains nearly as much writing, giving a glimpse into the rollicking, sturdy world that made the Romney family happy and sends strength through the generations, as it does recipes. 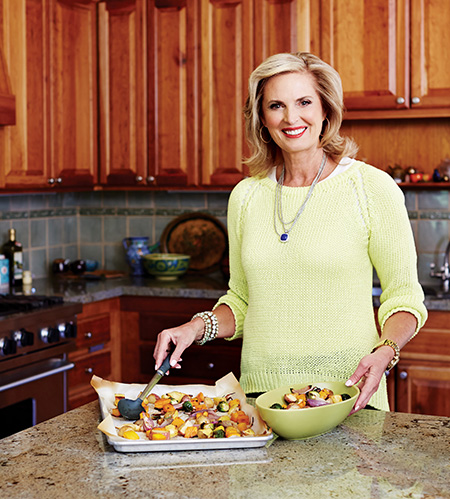 Ann told Meridian, “I realized that food is wonderful, good and delicious, but it is irrelevant. What matters is what it did to bring us to the table together. Everything in our life is celebrated around food-all the holidays, even a death. We always gather around food, which allows us to have the conversations that are the most meaningful and have the relationships that build such strong bonds throughout life.”

“Meal times became the moments we took for each other.” 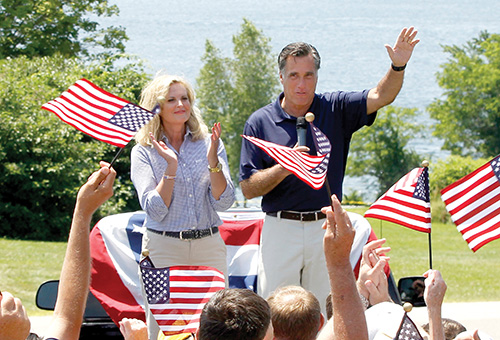 In the book she takes us into the heart of her family, to holidays or to pancake mornings and a son, Ben, who only wanted pancakes for breakfast (now take a gasp)-every day.

She shares a moment you would never otherwise ever see, “The morning after Mitt conceded defeat in his 2012 presidential campaign, I came home and made Grandmother Pottinger’s pancakes for both of us. There was so much batter left over that we decided to make pancakes for the Secret Service guys who were packing up to leave. They had become like family to us, so sharing a family tradition just felt right. We put a pancake or two on each of ten or so paper plates, and Mitt ferried them to the guys in their cars outside.”

On the campaign trail, she said, “We were in hotels, we were never home, I was never in a kitchen.” However, she did take time occasionally to make Welsh cakes to take on the campaign trail and even gave some to the press corps. “Cooking is an extension of who I am. When I cook, I cook with love,” she said. She explained in her book that she was appreciative and proud of her Welsh heritage.

This recipe is from Annie Evans, my Welsh grandmother. It is required that all family members learn to love this recipe-the Welsh blood must live on. You must be careful not to overcook the cakes or make them too thin.

Beat egg with milk. Add currants and set aside. Sift together flour, 1 cup sugar, nutmeg, baking powder, baking soda, and salt. Work shortening into flour mixture with pastry cutter or hands and mix until mealy. Pour milk and currants over flour mixture all at once, and mix well. Wrap dough in waxed paper and chill at least one hour.

Roll chilled dough about 1?4- to 1?3-inch thick. Use a round cookie cutter to cut out cakes. Grease a pancake griddle with oil and heat to 325 degrees F. Place cakes on griddle to cook, turning when the uncooked side has a glossy look. Do not overcook. Place one cup sugar in a shallow bowl. Dip both sides of cakes in sugar as you take them off the griddle. Cool.

There are some tricks to making these well, as opposed to the way my grandmother made them. First, you need to cook them on a pancake griddle-a frying pan will not do. Second, don’t roll them out too flat-about a quarter to a third of an inch is just right. When they are on the griddle for a while, before you turn them over, look to see if there is a glossy look to the uncooked side. Flip them over when that’s there. It’s a bit like cooking pancakes: most of the cooking is done on the first side before they are turned over. You don’t want to keep them as long on the griddle once they have been turned over, or they get too dry.

By the way, these stay fresh for two or three days. And they freeze beautifully: I usually make a double batch and freeze half of them so that I can bring them out with no fuss or muss on special occasions.

In the book, Ann takes us to Family Nights including a favorite story of hers to introduce some cookie recipes. She writes, “We have precious (and funny) memories from these evenings. Once, when the boys were very young, Mitt taught them the lesson as it was suggested in a church handbook for family nights. Mitt and I sat on the sofa and the boys sat on the floor, listening. The moral of the story was about procrastination. The lesson told of a little boy who was asked by his mother to do some chore-close the gate for the dog, pick up his clothes, and so forth.

“Each time, the boy responded, In a minute, Mommy.’ But each time, his procrastination led to a bad thing: delaying to close the gate for the dog meant the dog got lost; delaying to put away his clothes meant he couldn’t find what he needed the next day for school.

“When the lesson was over, Matt, then five years old, asked Mitt and me to sit on the floor. He climbed up on the sofa and began thus: Once there was a little boy who asked his mommy for a cookie, and she said, “In a minute, Matt.” We howled. Yep, he had understood the moral of the story, and now, so did we!”

Although this book is a national release, Ann also doesn’t shy away from talking about the importance of religion to the family. She asked a renowned psychologist what the key was to raising good children. “‘The best thing you as a parent can do for your children,’ he replied, is to love your spouse. And then he continued, love your children.’ I’d add another,” she said, “love God. I’m convinced that religion is an enormous help in raising kids.”

Not only does she give some Sunday recipes, she tells a funny story on herself. “When my third baby arrived, I took preparations for getting to church to an extreme. On Saturday night, I dressed the boys for church and put them fully clothed in their beds. Sunday morning, presto, they were in church clothes. Wrinkled, yes, but we got to church on time. And breakfast? That was a muffin in the car.”

I asked Ann how she was so comfortable sharing these funny, very real stories of a life that, like everybody’s, did not always roll along smoothly when she has been so often in a harsh spotlight where the temptation would be to put on the pretense of perfection. She said, “I think I just got used to being in the spotlight and I don’t know how to be anybody else but who I am,”

That refreshing, real Ann Romney flair that served her so well during Mitt’s campaign, serves her again in her cookbook. If her children and grandchildren love Fluffernutter sandwiches made with marshmallow fluff, she shares the recipe, admitting that healthier choices are out there. If when her sons leave home, she announces that she’s tired of cooking and not going to do it anymore, she doesn’t hide that either. 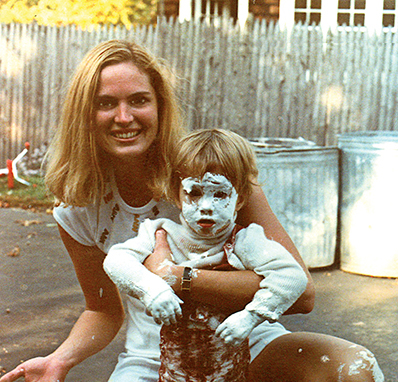 The reader will be glad she changed her mind about cooking. In this beautifully-illustrated, full-color book, she has shared not only her own recipes, but those from her sons and their wives who have made tantalizing meals at their New Hampshire summer cabin.

What are Ann’s favorite recipes? She says she has featured four different salmon recipes in her book and she loves each one. Because her growing sons didn’t really like salmon, now “When I get an opportunity, I make it.” Here’s her recipe. 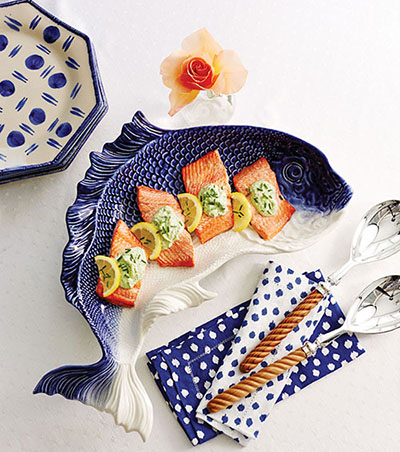 Whisk together wine, orange juice, and soy sauce and pour in a 9×13-inch glass baking dish.

Place salmon in marinade with flesh side down. Cover dish with plastic wrap and refrigerate

2 hours, turning occasionally. Preheat oven to 375 degrees F. Cover a baking sheet with foil. Remove salmon from marinade and place on foil, skin side down. Roast approximately 8 to 10 minutes, or until fish is opaque in center. Do not turn fish over while cooking. Before serving, sprinkle salmon with salt and top with dollops of Cucumber Sour Cream.

Process spinach, arugula, and shallots in food processor until finely chopped. Add sour cream and mustard. Pulse until just blended; transfer to medium bowl. (Mixture can be refrigerated at this point.) Just before serving, stir in cucumbers and season to taste with salt and pepper.

The media loved to paint Mitt Romney during his campaign as a rich elitist. It is no surprise to find them wrong. What’s Mitt’s favorite meal? Old-fashioned meat loaf cakes. Here’s Ann’s recipe. 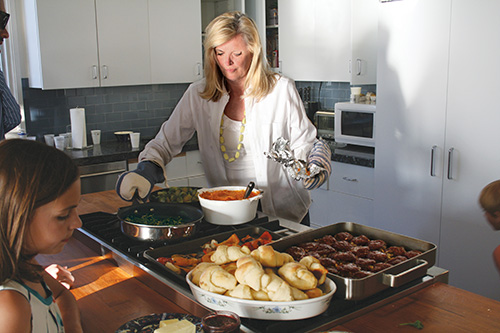 This is one of Mitt’s favorites. I always make it for his birthday dinner with mashed potatoes, cooked carrots, and homemade rolls.

Preheat oven to 350 degrees F. Mix together all ingredients for loaves. Shape and put into 6

Ann said, “Mitt and I are very devoted to our children. When we are at the table with our children and grandchildren, our sons are actigin like they did when they were children. There is the same spontaneity and the same stories. We hear, Remember when this happened. Remember when that happened?” Your grandchildren see this and they become aware that they are truly valued.”

Beautiful work Mrs. Romney. I was so very much disappointed Mitt didn't win the election. I campaigned to everyone who would listen to me about how smart he was and a good moral person. My greatest wish is that he would run again. Voters now realize their big mistake.

The more I know about the Romney family, the more I admire and love them. Sure wish we had a "President Romney" in the White House! What a loss for our country.