The Changing Face of Jewish Identity

According to a new study by the Pew Research Center the vast majority of American Jews say that they are proud to be Jewish, but the study also suggests that the definition of what that identification implies is rapidly changing. The study found that one-in-five Jews (22%) describe themselves has having no religion.

The number of Americans with Jewish ancestry or upbringing, who consider themselves to be Jewish, while self-identifying as agnostic, atheist or having no particular religion, appears to be rising. 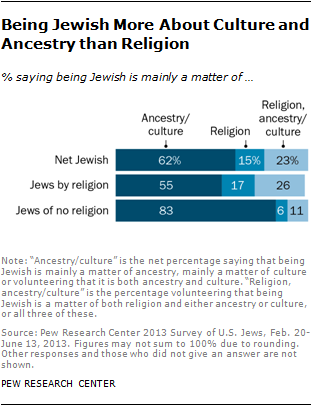 The findings in this study also suggest that the shift in religious identity among American Jews is merely a microcosm of a shift in attitudes towards religion in the broader American public.

The article continues, “This shift in Jewish self-identification reflects broader changes in the U.S. public. Americans as a whole – not just Jews – increasingly eschew any religious affiliation. Indeed, the share of U.S. Jews who say they have no religion (22%) is similar to the share of religious “nones” in the general public (20%), and religious disaffiliation is as common among all U.S. adults ages 18-29 as among Jewish Millennials (32% of each).”

The study goes on to analyze data relating to the reasons behind this observable shift in Jewish identity in America. It, also examines data from all aspects of Jewish life from child-rearing to standing on the state of Israel. To read the full article from the Pew Research Religion & Public Life Project, click here.

when I saw the title of this article I decided to comment without reading it because I know its true. there is a new married into member of our family who is jewish ..and basically he is jewish around his family and friends...when they are not arround well, he is part jewish. the other thing I want to comment on has nothing to do with this new family member...my husband and I spoke about this issue..why do so many jewish people vote for the left..democrats when they are more or less supported by the right religious part of our government who want to protect Israel....we have discovered that the jews here really dont care about Israel....there is such a division of feelings between the two..unless they have relatives in Israel....those that dont..dont really care that the left doesnt give a hoot about Israel....its becoming more and more obvious if you watch what is going on in the political world....something is amiss with this obvious division...I cant say its like the catholic church...once years ago there was this distinct division but the catholics have gotten closer to rome now then ever before...this is my perception and my husbands...the American Jew seems to be in name only and religion plays a tiny part in their lives and they do separate themselves from Israel....strange...this isnt all jews here in america...but probably a large percentage...esp if you are wrting about it...