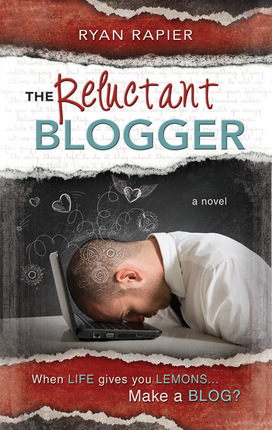 I don’t review every book I read, not even all of the ones I like, so I weighed a lot of pros and cons about reviewing this one. There are a lot of things I like about the The Reluctant Blogger by Ryan Rapier and a few I don’t. This is a story that gives the reader plenty to think about and comments from others who have read it lead me to think it is a story that will touch many people.

It’s the story of a man who is trying to deal with the death of his wife, pick up his life, and raise three children as a single father. He has an obnoxious, pushy father who is rushing him to remarry, two life-long friends with whom he has little in common except a love of playing golf, a thirteen-year-old diva daughter who is as dictatorial as her grandfather, and he is seeing a weird psychologist whom he doesn’t talk to, but instead shares one-sided blogs with him.

Todd is severely depressed following the sudden death of his wife. He’s not interested in his father’s advice and resents the way his father tries to run everyone and everything. He goes to his bishop instead for advice. His bishop refers him to Dr. Schenk who nearly gives up on being able to communicate with his patient before hitting on the idea of a private, one viewer only, blog. In this blog Todd vents his anger, his fears, and his inner thoughts.

His father and his best friend conspire to force him to attend a Singles dance where everything goes wrong, but he meets a sweet, charming woman, Emily, whom he eventually begins dating. Soon, though not quickly enough to suit his father, Todd and Emily become engaged. His two younger children adore Emily, but the blackmailing diva does everything she can to sabotage the relationship including pushing her father to choose between her and his fiance. Todd caves in, breaks the engagement, and more problems ensue.

Todd’s problems extend to clashes with his friends over their lifestyles, resentment of the calling to serve in scouting given him in his ward, and an odd relationship with the woman he has to deal with in the scouting office.

I had trouble with some of the characters. For a man, Todd is intensely introspective and spends a lot of time exploring his feelings. He made me feel like I was reading women’s fiction even though he’s a man and the story is written by a man.

Todd also has a hair-trigger temper, but he never seems to explode against the people who cause him the most angst–except the scout lady. He’s easily manipulated and I would have liked to see him become a stronger individual. Though he grows some and overcomes his depression, I couldn’t see him anywhere near ready for the book’s ending.

Todd’s father has few redeeming qualities other than that he means well. His overbearing demands and poor choices would be easier to accept if Todd showed less hero worship for him and was less inclined to give in to his demands. The psychiatrist, it appears, is more concerned with decorating his office and applauding his own ego than in his patient. The women, even the scout office tyrant and the bratty daughter, are more sympathetic characters than the men.

Most of the book is the blogs Todd writes to Dr. Schenk. The format of the book isn’t exactly a series of blogs and it’s sometimes difficult to tell where blogging begins and ends. Because the story deals with emotional healing, there is more cerebral action than physical action, yet there is a nice plot arc and it holds the reader’s attention. The author doesn’t shy away from difficult topics such as discovering a close friend is gay and does an excellent job portraying the over thirties LDS singles scene. The author has an engaging style and his scenes feel realistic and go beyond the surface to the thoughts and feelings underneath.

Oh, and I love the cover of The Reluctant Blogger.

Ryan Rapier is a new author and an Arizona native. He, his wife, and four children love living in the desert where he plays golf year around.

I read the book and enjoyed it. Knowing Ryan, his wife, and some of his family, I could see many similarities between the book and things they have had to deal with. Great Book! Captivating writer, an easy read, just what I needed. Enough to make me think and ponder and examine my own beliefs. I'd recommend to almost everyone!