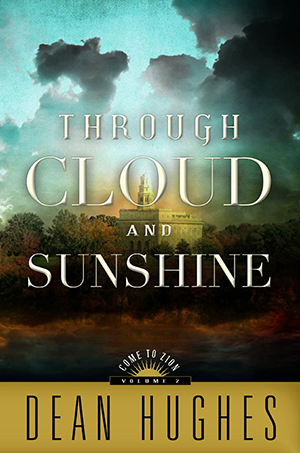 One Hundred Books! Through Cloud and Sunshine, Volume 2 of Come to Zion, is Dean Hughes’ one hundredth published book. His books have been read and treasured by all ages for four decades. I knew him first as a popular children’s main stream author and I approached his first adult LDS market books with a touch of skepticism since I’ve often been disappointed by authors who attempt to write for two different age groups. I soon discovered he could deliver. Of course, I like some of his books better than others. Let me just say I found the first book, The Winds and the Waves, in this new series okay, but not a favorite. This second book is Hughes at his best.

After a great deal of turmoil Will and Liz have finally reached Nauvoo, only to discover it isn’t the perfect Zion of their dreams. They’re living in a snug two room cabin, but Will is struggling to save enough to build a brick home. His efforts meet one obstacle after another. There are other immigrants in far worse shape than his family and he feels prompted to help them. There is great poverty and few jobs. Though Will has found steady work building roads for the county and plowing fields for those who lack oxen, he has to work long hours and he doesn’t always get paid. Joseph Smith calls him to serve in the Nauvoo Legion, then a mission. He makes an enemy of a violent anti-Mormon and his brother, and like the rest of Nauvoo, he and Liz live in fear of being attacked by the mobs that threaten their community. The most difficult challenges come from the rumors that abound concerning Church leaders and the discouragement and loss of faith that afflict so many. They’re aware too that some of the trials the Saints face are the result of some members’ arrogance, the old settlers feelings of being overwhelmed and overrun by the large numbers of Mormons that keep arriving, and the constant harassment and lies printed in local newspapers concerning them and their beliefs.

Life goes on for them with measures of joy and heartbreak. Their faith is tested over and over culminating in the horrifying murder of the prophet and the near loss of Will’s life. They see their community torn apart in many ways by being left leaderless and the inability of some leaders and many others to accept the teachings and doctrine taught by Joseph in his last months. Will works on hauling stone for the temple one day in ten at first, then later full time. In the process he learns more about the temple and is desirous of the temple blessings.

In addition to the 1840s story of Will and Liz Lewis runs the modern day story of Jeff Lewis, a great grandson of Will and Liz, and Jeff’s wife, Abby. They too are expecting a child and facing complications. And they too are living in Nauvoo, near the place where Jeff’s ancestors lived. Jeff had plans for a prestigious career in California or New York, but had to settle for a job he doesn’t really like when the economy went bad and he lost his job. As they struggle financially and with the demands of a seriously ill baby, they face disapproval, the discovery of true and loyal friends, and feel their faith grow as they learn to serve and follow the gospel.

The two couples are a lot alike and though they live more than a hundred and fifty years apart they face many of the same problems and are tried and tested in similar ways as they grow and mature as individuals and in faith. The villains of Will’s day are a lot more scary and threatening than those Jeff faces however. The plot personalizes the horrific events the people of Nauvoo faced during the years immediately prior to, and for the short period following, the martyrdom. The author does an excellent job of depicting the people as ordinary people with the failings and short comings of real people rather than the glorified individuals Church members in general have painted them in our minds.

The switch back and forth between the two time periods doesn’t feel as choppy in Volume 2 as it did in Volume 1, though I still found it frustrating to become absorbed in one story, then suddenly switch to the other. There have been a large number of books, both historical and fictional, written about this time period. Some are better than others. This is one of the best, perhaps because Hughes lived and served a mission in Nauvoo where he came to love the land, the people–both members and non-members–and felt the history of all that happened there become a part of him.

Dean Hughes holds a bachelor’s degree from Weber State University and has master’s and PhD degrees from the University of Washington. He has taught at Central Missouri State University and Brigham Young University. He and his wife Kathleen are the parents of three children who have blessed them with nine grandchildren. They live in Midway, Utah.

THROUGH CLOUD AND SUNSHINE by Dean Hughes, published by Deseret Book, hard cover, 417 pages, $25.99. Also available on CD and for e-readers via Amazon.