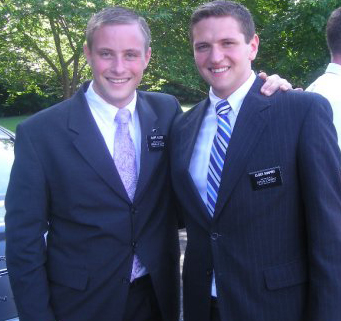 Late one evening, my companion and I were running door to door in our last few minutes prior to returning home for the day. On the top floor of the last apartment building a jovial man answered answered the door and quickly invited us inside. We were surprised at his kindness for we were rarely treated so warmly. We went inside and took a seat. After a drink of water, we began to talk.  “You’re Mormons, right?”  he asked. “Yes, that’s right,” we responded. “I love Mormons,” he continued, “I have many Mormon friends, they are all such great people. So nice! I could never be a Mormon though.”  “Why is that?” we probed.

He then proceeded to tell us about some things which were amiss in his lifestyle and past. The atmosphere grew tense as my companion began to directly approach the delicate topics.  Without a complete understanding of our point of view, I could see that this good man was quickly growing offended.  In my mind’s eye, I could see that if the conversation continued on this path, we would soon be on our way out the door, without a return appointment. Then the spirit softly prompted me with these words: “You can discuss this subject later, change the topic now!”

So somewhat abruptly, I immediately interjected a question that moved topic of conversation to safer ground.  The tension slowly eased and the spirit’s warmth returned to fill the room.  We were then able to teach some true gospel doctrine and he invited us back for another discussion.

Upon our return visit, we felt as though we should invite him to be baptized.  His response after our first full discussion was a solid no!

We again invited him to be baptized in the second lesson, and his answer was, “Not so fast.”

On our next visit and third baptismal invitation he replied, “Do you think I could be ready by then?” He then started asking questions like, “What would be expected of me as a Mormon?”

Then on our next visit, before we had even taught about the Word of Wisdom, out of the blue, he explained that he had heard that Mormons don’t drink coffee, so he had stopped drinking it a few days earlier.  He then committed to give up smoking on Monday. My companion and I were floored. He had completely transformed his life and we could see in his eyes and countenance the joy and peace which comes from living one’s life in accordance with God’s will.

He began to study, pray, replace former bad habits with good ones, and against the advise of friends and relatives, he decided to be baptized just six weeks from when we first met.  He came forth from the waters of baptism a completely new man, changed forever!

The Spirit converts, and its power is amazing. I am a convert and I had no intention of joining the Church when I first went to a sacrament meeting at the invitation of a friend. Neither did any of my family, and today we look back on that Sunday as the start of a wonderful journey! What a terrific story. It helps me remember that I need to have faith in other people AND in the Spirit of God, which is the same Spirit that parted the Red Sea. If it could work that wonder, why can't it part doubt, confusion, and stubbornness in our own lives?

Isn't it amazing how the Lord works through His missionaries to help those that need a "Little Nudge" to realize they need the Gospel in their lives. We all need to be closer to the Lord by listening to the promptings of the Spirit. Bless these two missionaries for being at the right place at the right time for this man. Continued success on your Mission.