Elder D. Todd Christofferson of the Quorum of the Twelve Apostles of The Church of Jesus Christ of Latter-day Saints created the Church’s 100th stake (similar to a Catholic diocese) in Peru on Sunday. 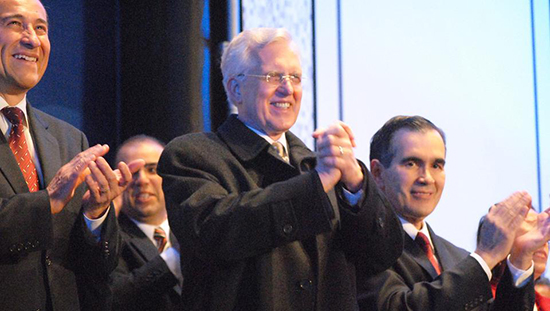 During the Sunday services, Elder Christofferson encouraged Latter-day Saints to continue to follow Jesus Christ by serving others. He also spoke about the Church’s rapid growth in Peru, where some 520,000 Mormons in nearly 800 congregations reside. The first Peruvian stake was created in 1970, and the Church has one of its 141 temples in Lima, with two others (one announced in Arequipa, another under construction in Trujillo) on the way.

On Saturday night, approximately 14,000 local Mormons celebrated the Church growth milestone at an event at the University of San Marcos stadium, which featured cultural dances, a parade of 300 former and current Mormon missionaries and a video about the Church’s 50-year history in Peru. The Saturday evening event was the largest-ever gathering of Peruvian Latter-day Saints.

Elder Christofferson also met Friday with a Peruvian congressman, the director of interfaith affairs and the director general of justice and worship. In all these meetings, Elder Christofferson spoke of the family’s importance in society. He also discussed the need to establish and promote projects that not only improve the future of the needy but also help them achieve self-reliance in the short term.

Information in Spanish about Elder Christofferson’s visit can be found on the Peru Mormon Newsroom website.