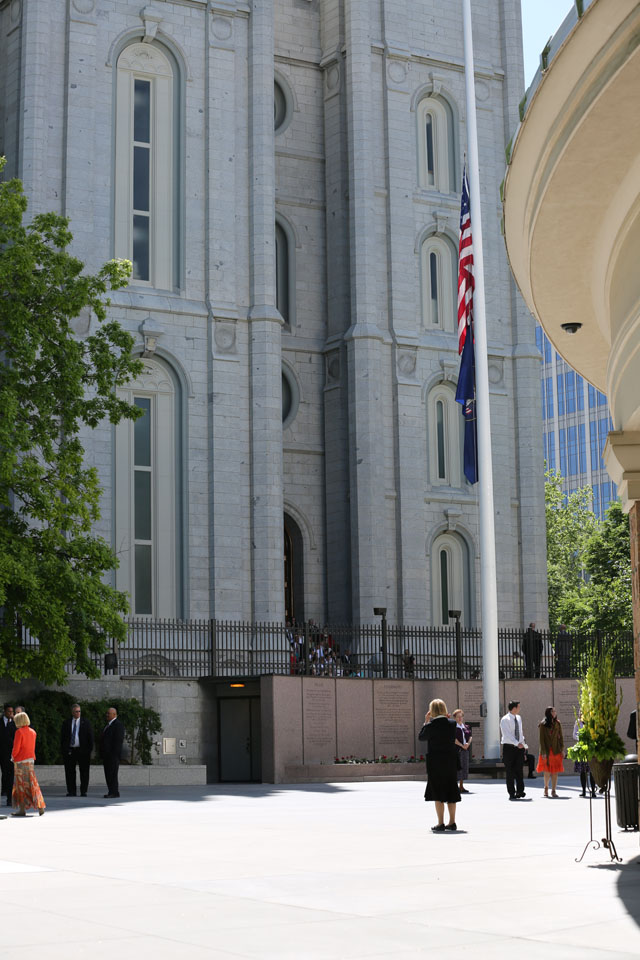 Sister Frances J. Monson, wife of President Thomas S. Monson was remembered at her funeral services Thursday in the Salt Lake Tabernacle for her legacy of love. President Henry B. Eyring quoted President Monson, who said of her, “There was no chink in her armor; there was no guile in her soul; there was no flaw in her character.” 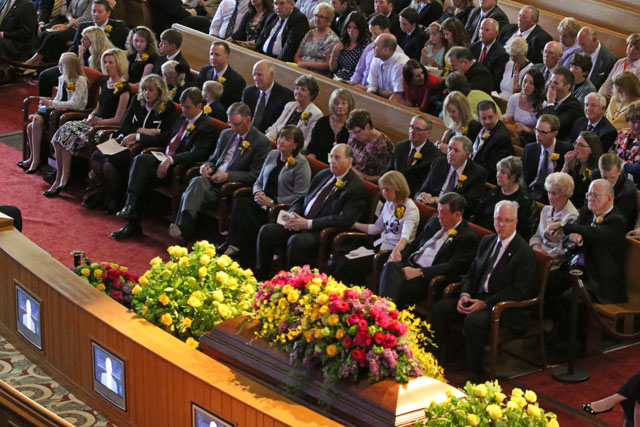 A pale President Monson sat with his family on the first row of the tabernacle, in front of the flower bedecked casket, and facing the stand. His family includes sons, Clark, Thomas and daughter Ann and their respective spouses, eight grandchildren and eight great-grandchildren. 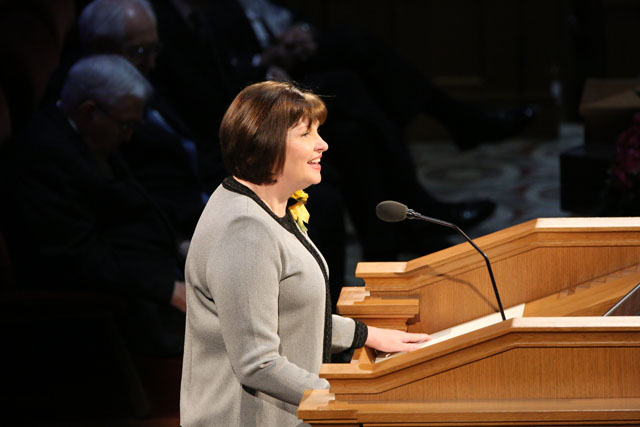 Ann, representing the family at the funeral, spoke of her mother’s “deep, abiding love for others.” She told a story that happened several years ago when her mother had been very sick in the hospital and a doctor had delivered a grim prognosis. President Monson answered, “I think Frances will be all right.” Later a baffled rehabilitation specialist shared why she recovered, “It is because she is so loved.”

A grandchild had a different explanation. “Grandma gets hurt, but she rises from her hospital bed and comes back to us because Grandpa needs her.” 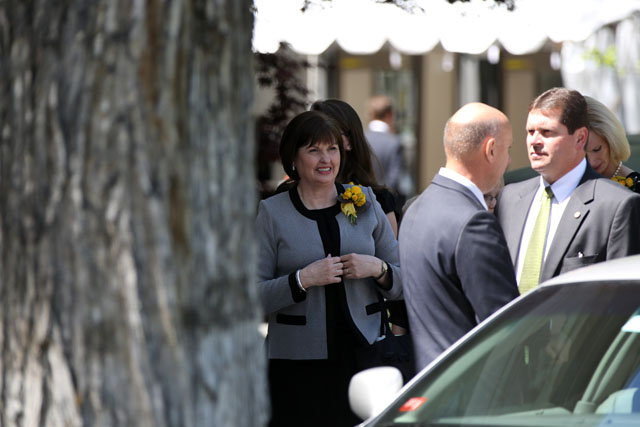 Ann said Frances deeply loved her own parents and took the family to visit them every Wednesday night. As long as Frances’ mother lived, she drove to her home to see what she could do to help her-every day.

President Monson was called to be a bishop at age 22, shortly after they were married. He was called into a stake presidency at 27, called to be a mission president at 31, and called to be an apostle at 36. Five years ago in a rare interview, Sister Monson said, “we didn’t question whether we felt unhappy about his being gone so much and working so hard. We just grew up with it.

Ann said that during those many years, “Mother waited, worked, prayed, raised children and endured their imperfect behavior. She reheated many meals and packed many bags, and she did it willingly and with a patient heart.” 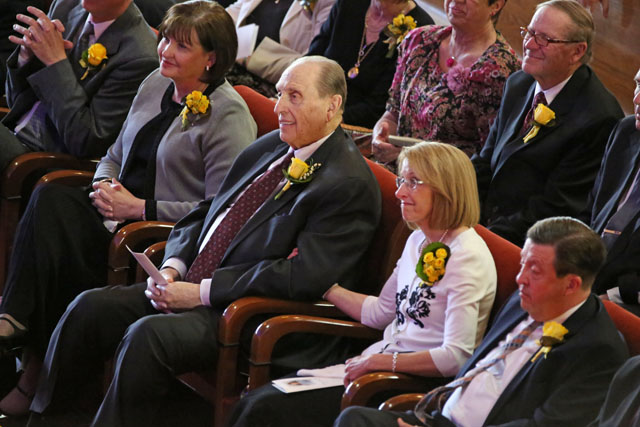 Ann remembered that one time, 12 years ago, after her mother was recovering from a double knee replacement, President Monson was required to travel and said, I guess I better pack my bag. Where is my bag?”

She said, “Sensing he might need some help, I took the shirts he had laid out and began to fold them and place them in the suitcase. My mother, in bed and in pain, said, ‘Ann, bring the bag to me and put it by my side. Give me the socks and Dad’s shirts. I know how to fold them just the way he likes them. That is my job. I’ve been packing his bag for 40 years.'” 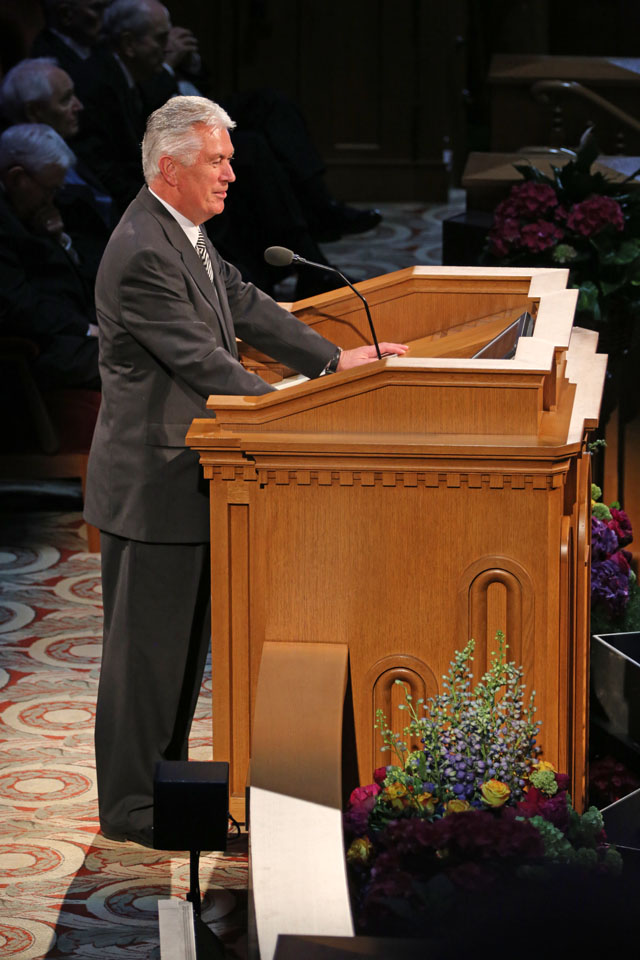 President Dieter F. Uchtdorf said that he remembers President Monson saying, “I could not have asked for a more loyal, loving and understanding companion.” He said that whenever he spoke of the mighty power of wives and mothers, “I knew he was thinking of his companion, Frances.”

He remembered visiting the grave of a missionary in Germany with the Monsons on a day of truly terrible weather. “We could not have picked a worst day,” he said. “Sister Monson was standing next to her husband in the pouring rain, barely protected by an overwhelmed umbrella, but there she was with a calm, smile brightening up the day with kindness…in a way that cannot be expressed.”

One of the sweetest compliments, President Monson gave to President Uchtdorf’s wife, Harriet, was “Frances and you are so much alike.” 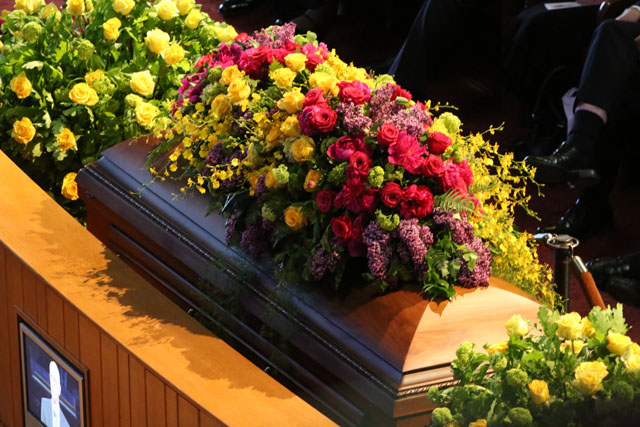 Referring to President Monson’s prophetic message “to the rescue,” President Uchtdorf said that death is also a mechanism of rescue, an essential step in the Lord’s great plan of happiness.” 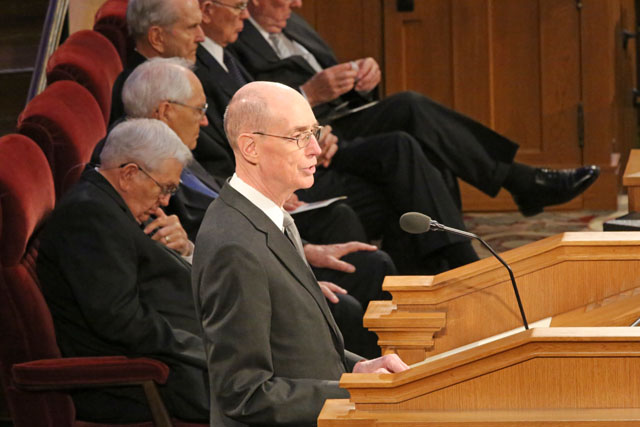 President Henry B. Eyring said that, “While this is a time of sorrow, it is also a time gladness for Sister Monson had a rich and rewarding life. The highest tribute to those who have passed through the veil is not grief, but gratitude.”

Of Frances, he said, “Her character is above reproach and her faith unshakeable.”

“She was quiet by nature, but when she talked, she had something to say.”

President Eyring noted that Frances made home a priority so that their home was a sanctuary where the Lord’s spirit could abide. He mentioned that once President Monson was asked where the best place was that he had journeyed. He quickly answered, “Home.”

“Frances was not given a pass to escape the tests of mortality,” President Eyring said. “Now we must follow her lead and be strong, resilient and trusting.” 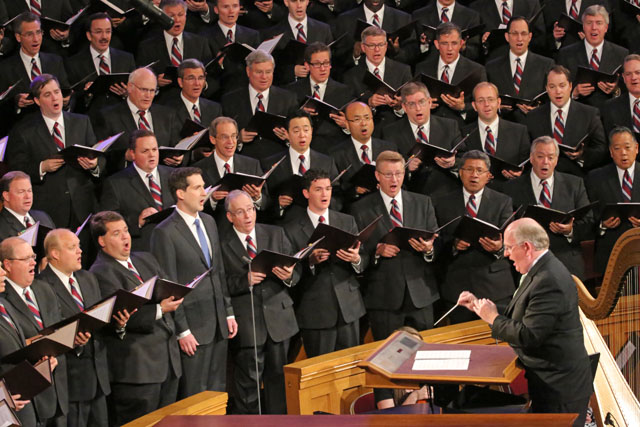 The Mormon Tabernacle Choir sang Sister Monson’s favorite hymns for her funeral including “How Great Thou Art” with soloist Dallyn Vail Baylis. Great-granddaughter Emily Steele sang “My Heavenly Father Loves Me,” in a beautiful, pure voice, accompanied by Sarah D. Steele on the piano. 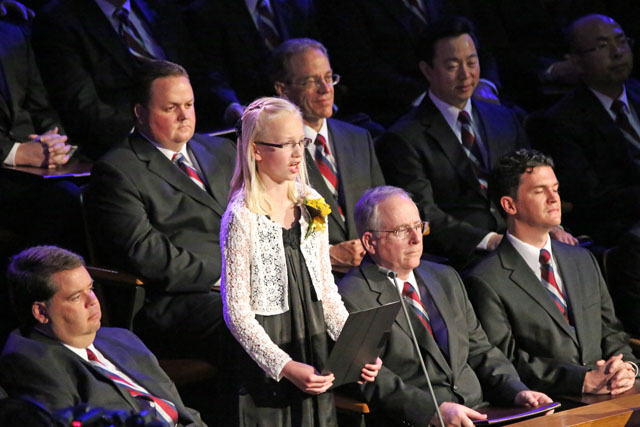 Prayers were offered by Elder William R. Walker of the First Quorum of the Seventy and Elder M. Russell Ballard of the Quorum of the Twelve.

Additional images from the funeral: 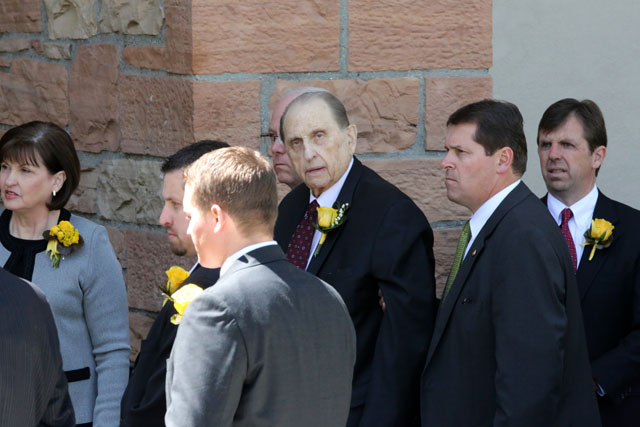 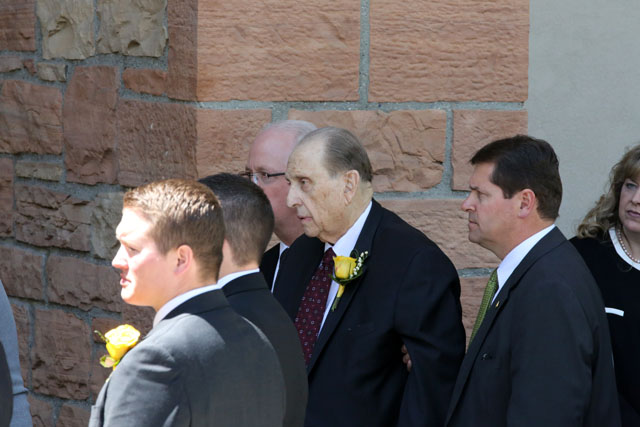 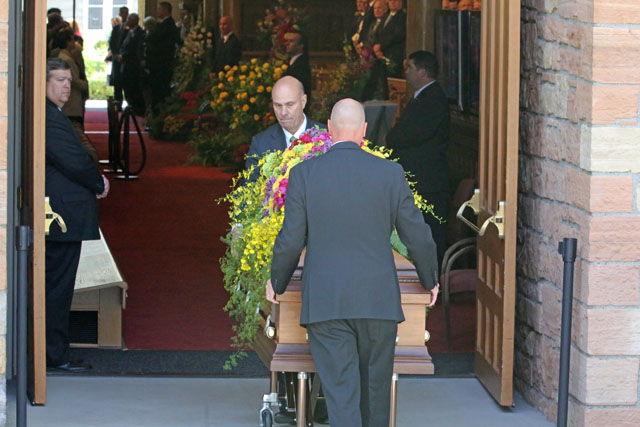 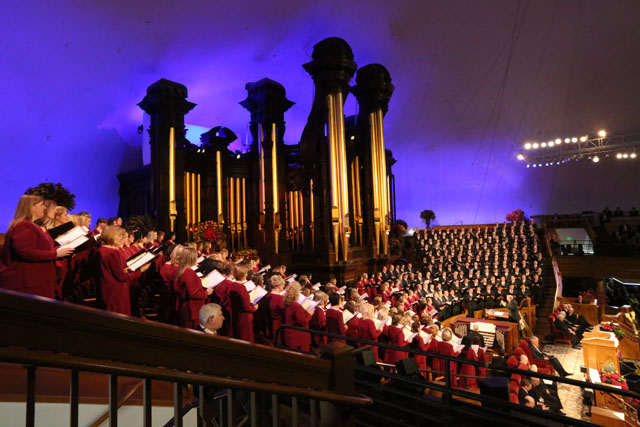 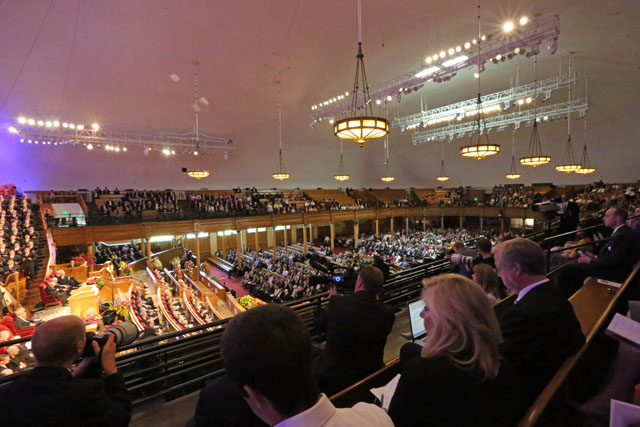 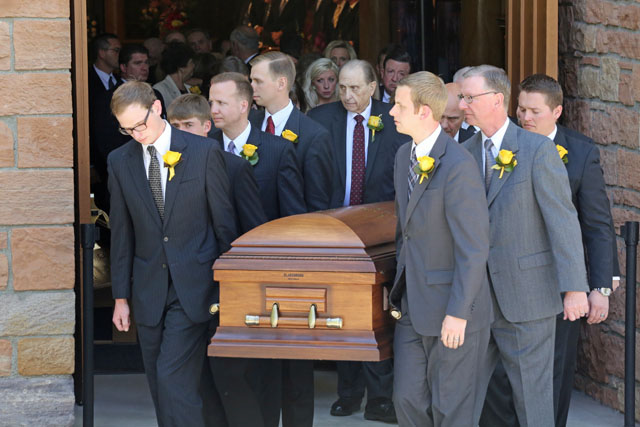 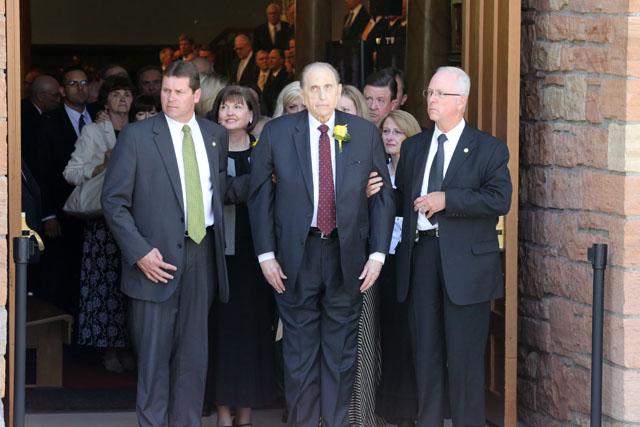 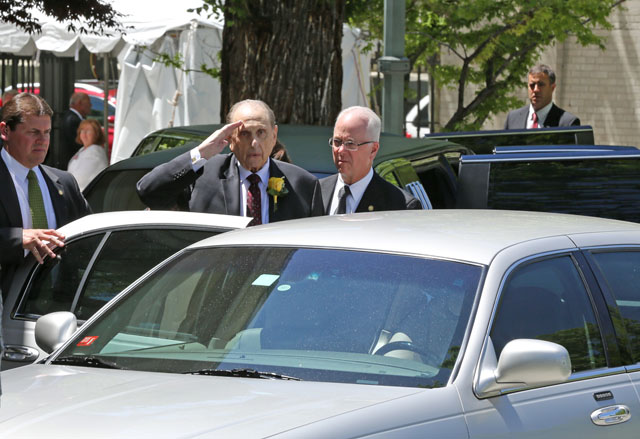 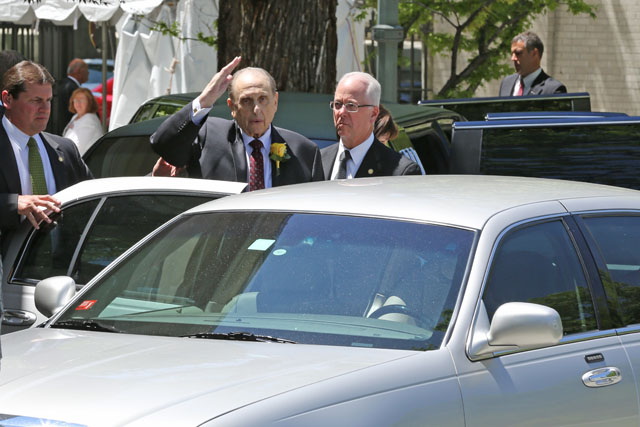 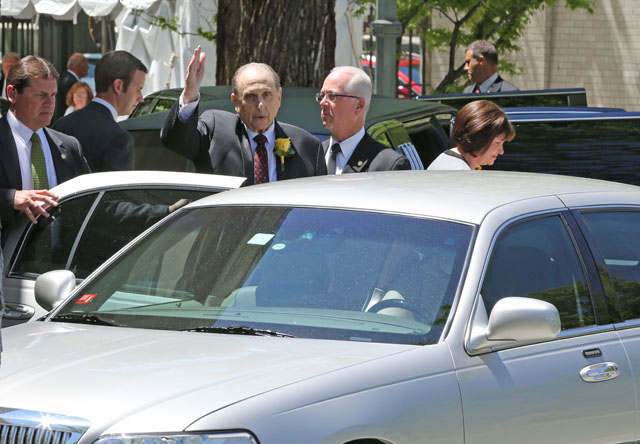 A beautiful memorial to a beautiful soul. God bless our Prophet during this time.