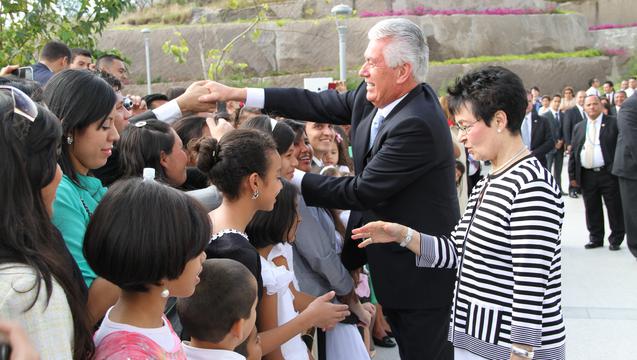 With great joy and songs of praise to the Lord, the Tegucigalpa Honduras Temple was dedicated on Sunday by President Dieter F. Uchtdorf, second counselor in the LDS Church‘s First Presidency in three sessions that were broadcasted throughout the temple district, which includes Nicaragua.

Elder Jeffrey R. Holland of the Quorum of the Twelve Apostles and Gregory A. Schwitzer of the Seventy also joined him for the dedication.

The 28,254-square-foot temple is made of gray granite from China and stands 41.2 meters tall, with an angel Moroni on top heralding the good news that the gospel has been restored.

The night before the temple dedication 4,100 Latter-day Saints participated in a cultural celebration at Hector Chochi Sosa Stadium in Tegucigalpa. With song and dance, beauty and culture of the nation was celebrated, focusing primarily on the coming of the temple to this land.  It took ten months to prepare the colorful program.  Approximately 15,000 people attended the program, including President Ucthdorf, other Church leaders and the president and first lady of Honduras. 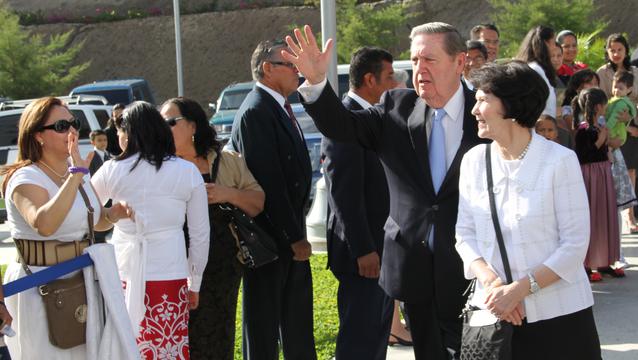 Elder Jeffrey R. Holland and his wife, Patricia, greet the Saints as they arrive for the dedication. 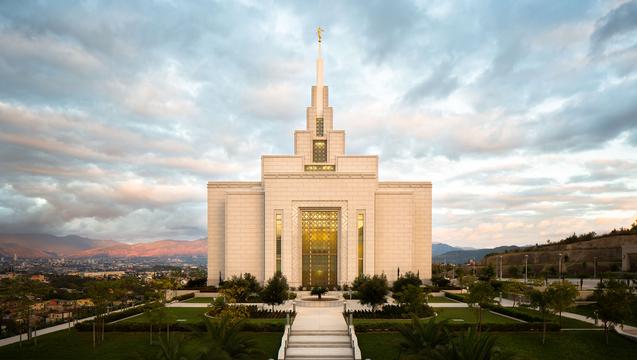 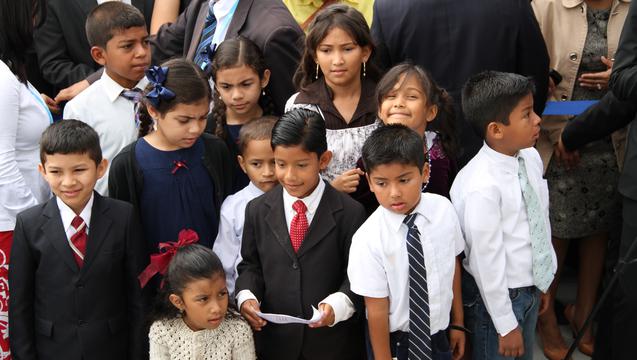 Excited children are all dressed up for the occasion. 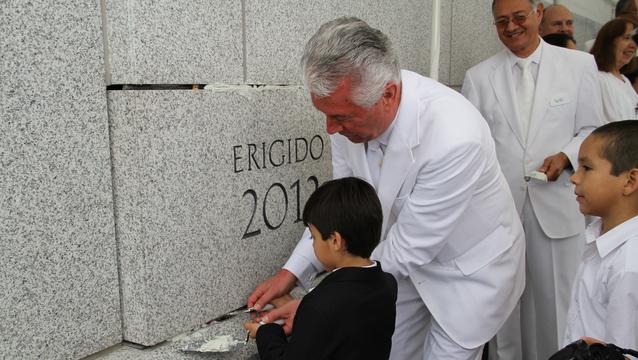 President Uchtdorf helps a child place mortar in the cornerstone, imprinting the moment forever in this child’s mind. 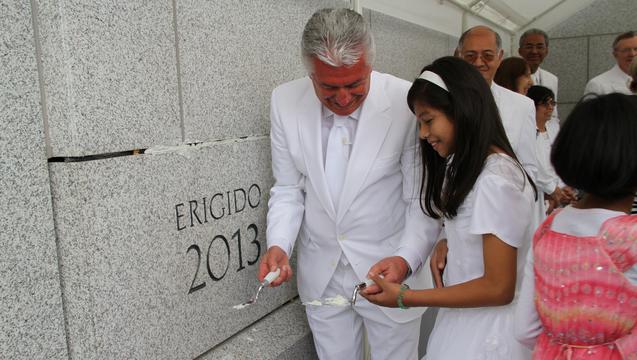 A sweet girl gets her chance to place some mortar in the cornerstone. 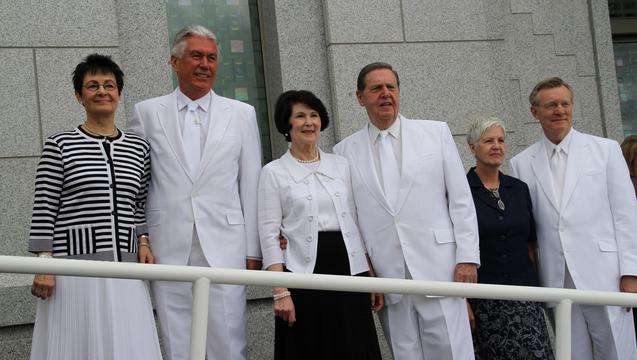 (left to right) President and Sister Dieter F. Uchtdorf, Elder and Sister Jeffrey R. Holland and Elder and Sister Gregory A. Schwitzer participated in laying the cornerstone and dedicating the Tegucigalpa Honduras Temple. 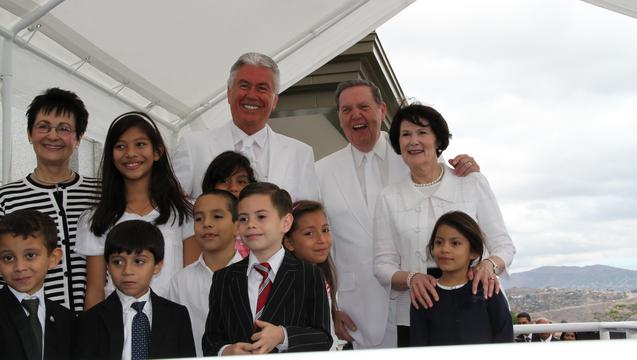 After the cornerstone ceremony, the temple is ready for dedication. 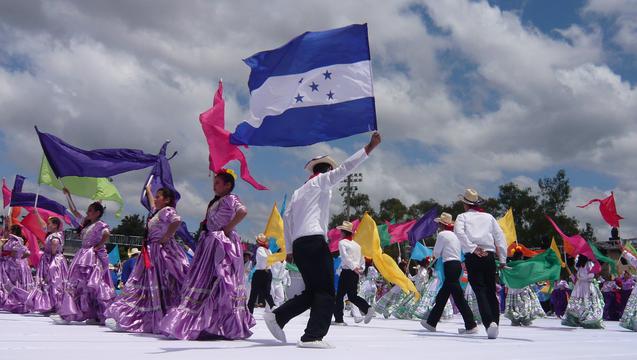 The cultural celebration was a colorful pageant of dance. 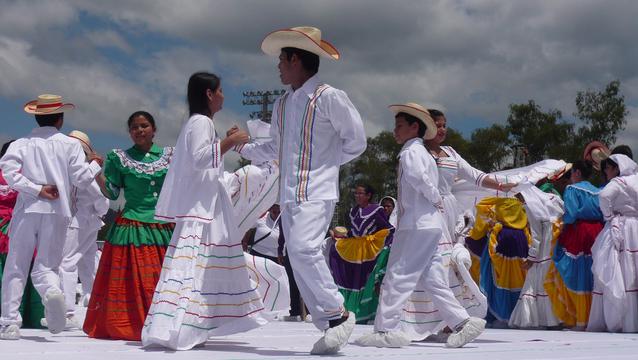 It is a coordination effort of great proportions for those who participate in the cultural celebration. 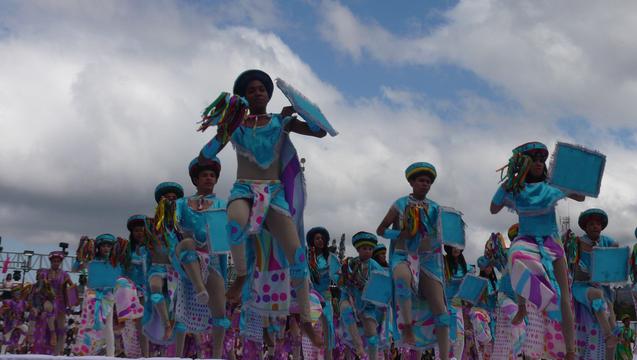 People performed dances that they didn’t dream they could do. 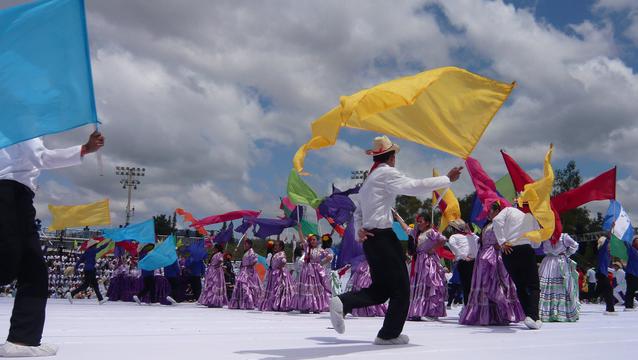 The dedication of a new temple is truly something to cheer about.

All photos are copyright 2013 by Intellectual Reserve, Inc.

I am so pleased as I anticipate the blessings that will be poured upon the heads of the people of Honduras. My heart rejoices!

We served in Honduras from 2005 -2007. We are thrilled to see the Temple there. It will be a great blessing to all. May God smile kindly upon the Country.