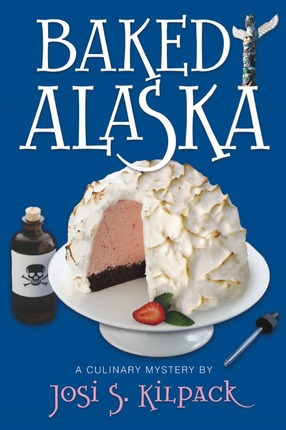 Baked Alaska is the ninth book in Josi S. Kilpack’s Sadie Hoffmiller culinary Mystery series.  Ordinarily I don’t choose to review each book in a series, but since each mystery in this series is a stand-alone story, I’ve reviewed most of them.  There is a long, drawn out romance that is furthered a bit in each book between Sadie and police detective, Pete Cunningham, but the books usually have little romance in them. It’s not even necessary to read the books in order. The books aren’t meant to be romances; they’re primarily a combination of mystery and cookbook, however this one falls more in the women’s fiction category and deals more with relationships and emotions than mystery. This one also includes more of Sadie’s two adult children than usual, though they have individually made appearances in some of the earlier books. Both children are adopted and Shawn’s search for his birth mother leads to some of the complications in this book. Pete makes a strong appearance in this volume as well.

Sadie plans an Alaskan Inside Passage cruise for herself, Pete, and her two children.  She wants her son and daughter to get to know Pete better, her son has been a little distant for some time and she wants a chance to spend some time with him, and she plans to help her daughter plan her wedding.  Her plans are messed up when she discovers her son arguing with an older woman and it becomes clear he and Pete are keeping a secret from her, and Breanna is in turmoil because her future mother-in-law already has her wedding all planned.  Matters grow more complicated when Sadie and Pete discover the woman her son was with earlier in a comatose state, apparently from drinking from an unauthorized bottle of wine and a man drops dead in one of the ship’s restaurants.

There are several mysteries that fall into Sadie’s lap and between her hysterical bouts over her children and their problems, she sets out to resolve them. When coincidence, which there’s plenty of, fails to provide the answers she wants, Sadie reverts to plain old busybody snoopiness.  Pete is her voice of reason.  He calms down her overzealous inclination to solve her children’s problems and attempts to keep her mystery solving within legal bounds.  He doesn’t always succeed.

The Alaskan cruise ship makes a fun setting and since cruises are notorious for providing plenty of good food, the author includes a large variety of interesting recipes both from the ship’s supposed menu and one in particular from a restaurant the author and her husband visited during a shore leave on a real cruise. I generally skip over the recipes in books, but I did look at the Baked Alaska ones since I particularly like this dessert and was a little disappointed to see only cake and cupcakes.  My favorite includes a brownie base with caramel ripple ice cream. Oh well, I’m sure the cake and cupcake bases are delicious and preferred by some people.

Kilpack has done a superb job of maintaining Sadie Hoffmiller’s character through so many books.  In my view she’s not really a likable character, yet she is one with whom readers can identify even when they find her exasperating.  She’s a snoopy busybody who easily over reacts and behaves impulsively. She likes to micro-manage- especially her children’s lives.  With all of her confident mother-knows-best approach to life, she has some feelings of inferiority and fear of ridicule and she always means well.  She also has the saving grace of being able to admit she doesn’t have all the answers when it is pointed out to her.  She fits in well in this black widow kind of story filled with women who don’t exemplify the best of their gender. I personally like Pete a lot more than Sadie.  He’s far more reasonable and thoughtful.

It’s difficult to comment on a story’s resolution without creating spoilers, so I’ll simply say I found the endings of the various mysteries in this volume less than satisfactory.  Motivations are not as well developed as this author usually manages.  However, the resolutions involving Sadie’s children and Pete work out very well.  Overall I think most readers will enjoy Baked Alaska and be anxious to move on to Rocky Road, the next installment in this saga.

Josie Kilpack has eighteen published novels to her credit, including nine in this culinary mystery series.  She received the 2007 Whitney Award for Mystery Suspense for Sheep’s Clothing. She and her husband and children live in Willard, Utah.