Sisters Will Identify with "Sisters in the Mix" | Meridian Magazine

Sisters Will Identify with “Sisters in the Mix” 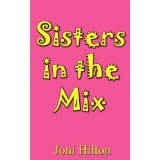 I found Sisters in the Mix, a short novel by Joni Hilton, hilariously funny, but a little sad too. It’s based on a dysfunctional family and is bound to make those of us who consider ours sisters our best friends grateful for the relationships we share.

Kate is a compulsive perfectionist and a word nerd. She likes everything neat, tidy, and in its place. Because of her interest in improving recipes, she gains a reputation as a chef though she doesn’t consider herself a great cook. She also loves any kind of word puzzle. She adores cross word puzzles and rearranges letters in words to form new words. When the crossword puzzle column she writes is cancelled, she is invited to star in her own cooking show. Unfortunately no one forewarned her that the show is meant to be funny because her set kitchen is sabotaged so that equipment doesn’t work or ingredients go missing, leaving her screaming and acting like a crazy woman. Speaking of a mental unbalance she has regular appointments with a psychiatrist who is as unbalanced as she is. Fortunately she has an easy going husband and laid back in-laws. Her children are sort of normal. It’s her birth family that is the problem.

Jackie is three years older than Kate and has made Kate’s life miserable since they were children. Jackie collects junk which she calls art. She’s sloppy, opinionated, a little dense, selfish, unorganized, single, and unprepared to support herself though she considers herself a great artist. Despite Kate moving to Southern California to get as far from her mother and sister in Chicago as possible, her self-centered mother devises a trick to send Jackie to live with Kate. Everything goes wrong and Kate always gets the blame just as when they were children.

Kate and her husband figure the only way they’ll ever get rid of Jackie is to find her a husband. It would be so nice if Jackie were some someone else’s problem. One hilarious disaster after another occurs as they hatch one disastrous match-making scheme after another.

The characters are a little over the top, but not so much that the reader can’t identify with them. They’re funny, but touching too. Kate grows and becomes somewhat more mature, but it’s going to take more than one epiphany to resolve all that’s wrong between her and her sister. The action builds throughout the story, but there isn’t as much an ending as simply “a moment of truth.” The situations the sisters find themselves in and the dialog are the books greatest strengths and provide the comic escapism that make the story fun.

Joni Hilton is well known as a humor writer and has twenty published books to her credit. She is a former television talk show host and has a regular radio advice program. She’s a popular speaker. She and her husband, Bob, are the parents of four children.

SISTERS IN THE MIX by Joni Hilton, published by Amazon, 170 pages, available on Kindle $2.99, and paperback from Amazon for $6.00.