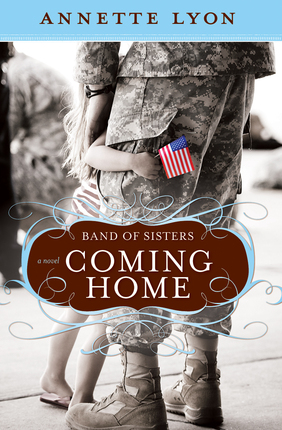 Coming Home, the second of two books by Annette Lyon dealing with the wives of National Guardsmen deployed in Afghanistan is being released this month. The first book in this duo was called Band of Sisters and dealt with the problems five women faced when their husbands were in a dangerous combat zone while they were left to manage their families, homes, and finances on their own.

This second book begins with the homecoming of four of the husbands. The other wife, Marianne, now a widow, stays as far from the airport as possible during the arrival of the other four soldiers. Neither she nor her problem-riddled children have adjusted to live since her husband’s death.

Kim is the youngest wife. She had barely become a wife and hadn’t adjusted yet to marriage when her husband was deployed. During the year her husband was away she learned to be a mother, but still knows almost nothing about being a wife. Her baby, instead of her husband, has become the center of her world.

Brenda has the most secure marriage, but her husband comes back with unexpected problems. The war has left him with emotional problems, PTSD. Instead of the calm, easy going husband, she kissed good-bye a year earlier, he vacillates between a sleeping zombie and an angry raging maniac. She struggles to keep their energetic children quiet, he loses his job, then only a few months after his return she discovers she’s pregnant.

Jessie is convinced the best year of her marriage was the year her domineering husband was gone. During his absence she learned she isn’t nearly has helpless or stupid as she’d thought. Upon his return she resents his manipulation and attempts to control her every thought and action. Though they spent an idyllic two weeks after his arrival vacationing, first with their children, then by themselves, he quickly reverts not only to his old ways, but she learns he has picked up some revolting habits that accentuate their problems.

Solid, dependable Nora soon learns that her colonel husband’s return this time isn’t quite like all of his other returns from deployment. This time he’s home to stay. She doesn’t know what to do with a retired husband who always seems to be underfoot and in her business. With all of his long absences, she’s become a strong, independent woman and without soldiers to order around he seems to think he should take charge of her, their finances, and their family.

The emphasis in this book is on characters, their views, emotions, and growth. It’s “women’s fiction” and though some people have the misconception that this genre is the same as Romance, it’s not. There are some romantic gestures between some of the couples, but there are no plot developments one might label as romances. There’s little action or mystery either. Some might say this story lacks an overall plot, but there is a plot, a different kind of one from what is generally expected in a novel. It’s a story that is repeated in our society far too often of the high expectations wives and girlfriends have concerning the return of their warriors, the discovery that both the one who faced combat and the one who met the challenges of waiting have changed, and the steps necessary to make a relationship work once more or move on. It’s about the strength derived from friendships between women and the support they give each other through good times and bad.

Weaving together five stories, five points of view in 238 pages, made it difficult to feel strongly about any of the five women. It seems I’d just get into one story and the book would jump to another one. Still the author did a great job of portraying the struggles of deployed National Guard soldier’s wives who do not have the support system built into their situation that regular military families have and who are largely invisible to their surrounding communities.

Annette Lyon is well known in LDS literary circles as a prolific writer, a grammarian and editor, and a reliable worker and supporter of writing organizations. She and her husband with their four children live in American Fork, Utah.