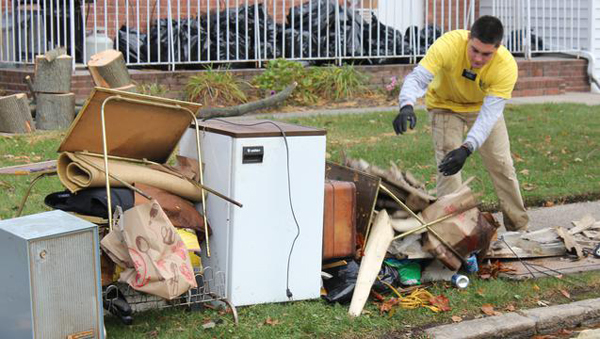 Missionaries and members from The Church of Jesus Christ of Latter-day Saints are giving aid and assistance to communities affected by Hurricane Sandy. Local Church leaders dispatched hundreds of missionaries, including more than 500 in the tri-state area of New York, New Jersey and Connecticut to storm-damaged neighborhoods to help residents.

Mormon missionaries in the New York area helped to bail out flooded homes, remove trees from roofs and clear yards in the mission area, which includes Staten Island, Brooklyn, Queens and Long Island. They first aided those with special needs, including elderly residents and those who needed access to power for medical devices.

Kevin E. Calderwood, president of the New York New York South Mission, said as missionaries and Church members went into communities to help, it quickly became a collaborative effort with neighbors wanting to work side by side to clear trees and debris.

President Calderwood said that the damage in the area is difficult to see. “Some homes are completely leveled, and people have lost everything,” he said. “You go from house to house, and people are really desperate at the moment.”

Elder Swede Storey, a missionary from Ogden, Utah, said it is hard to see people he’s come to love in such a difficult situation, but he’s grateful to be able to help. “I’ve grown to love this city so much, so it’s been tough to see the areas where I’ve served damaged and the families I know with so much damage.”

Elder Josh Munday, from Kent, England, another missionary in New York, was also thankful to be able to serve others during the disaster. “This is the calling of our Church, to help those who are in need,” he said. “It’s been so sad to see everyone with such hardships in their lives right now. We’ll be praying for the others who are in need.”

President Calderwood said missionaries will continue to provide whatever help they can in the coming days and weeks. “There’s more work here to do than anyone has capacity to do, but we’ll just take it one house at a time,” he said.

Missionaries, Church members and other volunteers will help meet immediate needs and assess damage, then make plans to return to help with larger, long-term projects. Some damage assessment and work must wait until roads are safe, downed power lines are cleared and flooded areas open up. As soon as first responders determine it is safe, local Church leaders will work with government and relief agencies to help organize assistance in those areas.

Relief efforts are being coordinated on both a local and regional level. The Church has equipment and supplies that are distributed as needs are determined. The Church has pre-positioned supplies in warehouses in Indianapolis, Washington, D.C., New York and New Jersey. Those supplies include generators, food, water, blankets, hygiene kits, tarps, chain saws, shovels and wheelbarrows.