What Mormons Believe: Who is Jesus Christ? | Meridian Magazine

What Mormons Believe: Who is Jesus Christ? 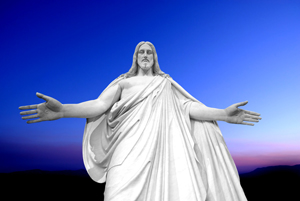 When the question “Who is Jesus Christ?” is posed, the answers vary greatly. Some might say He was a great moral teacher or a prophet. Others might say He was a fraud, while others worship Him as the Son of God. As we seek to understand who Jesus Christ is, we will draw closer to the blessing in John: “And this is life eternal, that they might know thee the only true God, and Jesus Christ, whom thou hast sent” (John 17:3).To learn who Jesus really is, we must understand His grand mission before, during, and after His time on the earth as a mortal man.

Who is Jesus Christ?

In the scriptures, Jesus is known by many names, including Savior, Redeemer, the Bread of Life, the Only Begotten,  Emmanuel, the Prince of Peace, Son, Wonderful, Counselor, the Mighty God, the Everlasting Father, the Messiah, the great I AM, and many more (Bible Dictionary, Christ, Names of).  This is fitting because Jesus fulfills many different roles. A better understanding of these roles and how He fulfilled them throughout His existence will help answer the question of His identity.

Before the earth was formed, we lived with God and His son, Jesus Christ. Our Heavenly Father presented a plan which required a Savior to die for the sins of all mankind so each of us could be forgiven of our sins through repentance. Jesus Christ would fulfill this vital role.  The name “Christ” is a title which means “Messiah” (in Hebrew) or “anointed” (in Greek).

During this time, Christ formed the earth and all everything in it under the direction of His Father.  Of this, the Apostle Paul writes: “For by him were all things created, that are in heaven, and that are in earth, visible and invisible, whether they be thrones, or dominions, or principalities, or powers: all things were created by him, and for him” (Col 1:16).

Before His mortal existence, He was known as Jehovah, with Whom the Israelites interacted in the times of the Old Testament. He gave the Ten Commandments and the Law of Moses to the Israelites, a law which prepared them for the time when He would come in the flesh.

Though He was the Creator and Savior of the world, Jesus came to earth in humble circumstances. While His Father was immortal, He was born to a mortal woman in a stable. Angels sang at His birth, and those who knew the signs came to worship Him (see Luke 2).

The Bible says little about Christ’s childhood, though much about the years before His death on the cross. To begin His ministry, He sought out John the Baptist and was baptized “to fulfill all righteousness” (Matthew 3:15). He selected twelve men to be His Apostles and traveled about teaching the people and performing miracles such as turning water into wine, causing those with physical infirmities to be healed, casting out evil spirits, and even raising the dead.

Despite the great power God gave Him, Jesus still had to undergo the challenges of being a mortal man. Alma, an ancient prophet in the Book of Mormon, said of Jesus, “And he shall go forth, suffering pains and afflictions and temptations of every kind; and this that the word might be fulfilled which saith he will take upon him the pains and the sicknesses of his people” (Alma 7:11). This was part of the plan so Jesus could then provide comfort and healing to others who suffered the challenges of mortality.

Notwithstanding His teachings and miracles, there were those who did not understand Christ’s mission and nature. Jesus knew that He would need to give His life for others. Shortly before He was arrested by the Jews and Romans, He went alone to a garden called Gethsemane to pray.

There, He took upon Himself all the sins, pains, sicknesses, and temptations of all mankind throughout all history. This is something only He could do because of His divine parentage-the experience would have killed any other man. The pain was so excruciating that He sweat drops of blood from every pore of His skin.  In agony, He cried out, “Abba, Father, all things are possible unto thee; take away this cup from me: nevertheless not what I will, but what thou wilt” (Matthew 14:36).

Notwithstanding the incredible weight of the sacrifice, Jesus submitted Himself to His Father’s will and completed His task, which is known as the Atonement. Within hours of his arrest, the Romans scourged Him, drove a crown of thorns into His head, and forced Him to carry His own heavy cross through the streets of Jerusalem. Finally, they crucified Him. Jesus Christ gave up His life on the cross, declaring “It is finished” (John 19:30).

Jesus’s followers laid Him in a tomb where His body remained for three days. On the morning of the third day, His spirit and body reunited in an event called the Resurrection. Coupled with the Atonement, this immense sacrifice allows all mankind the opportunity to be resurrected and to repent and be forgiven of their sins. He fulfilled His Father’s mission for Him.

The ancient prophet Amos assures us, “Surely the Lord God will do nothing, but he revealeth his secret unto his servants the prophets” (Amos 3:7). As He did in ancient days, Jesus Christ continues to lead His church through His servants the prophets.  He established The Church of Jesus Christ of Latter-day Saints with a prophet at its head to help people prepare for His Second Coming.  On that day, which date is unknown to all but God Himself, Jesus Christ will return again to earth, this time not as a humble baby, but as a glorious king.

Then “Christ will reign personally upon the earth and…the earth will be renewed and receive its paradisiacal glory” (Articles of Faith 1:10).

Jesus will judge every person for who he or she has become. He is the perfect person to do this, as He loves each of us and personally understands and has paid for all of our sins and weaknesses. Mosiah, an ancient prophet in the Book of Mormon, described this: “Yea, every knee shall bow, and every tongue confess before him. Yea, even at the last day, when all men shall stand to be judged of him, then shall they confess that he is God” (Mosiah 27:31).

Then Christ will usher in an era of peace and happiness unlike any before. John the Revelator described this time in the following words: “And God shall wipe away all tears from their eyes; and there shall be no more death, neither sorrow, nor crying, neither shall there be any more pain: for the former things are passed away” (Revelation 21:4).

When asked, “Who is Jesus Christ?” a modern prophet named Joseph Smith said, “And now, after the many testimonies which have been given of him, this is the testimony, last of all, which we give of him: That he lives! For we saw him, even on the right hand of God; and we heard the voice bearing record that he is the Only Begotten of the Father-That by him, and through him, and of him, the worlds are and were created, and the inhabitants thereof are begotten sons and daughters unto God” (Doctrine and Covenants 76:22-24).

Jesus Christ is a central figure to God’s plan for His children.  Answering the question “Who is Jesus Christ?” is vital to the salvation of every child of God and should be something that each person should pursue to know for themselves.

About “The Missionary Corner”

Did you know that media leads have become one the largest sources of missionary contacts? Do you want to become an Internet missionary? Gospel Ideals International and Meridian Magazine have teamed up to publish “The Missionary Corner” each week. We have a team of volunteer LDS writers who lend their talents to write articles on gospel subjects. When Internet searchers read one of our articles and choose to learn more, we point them to Mormon.org. Every week, “The Missionary Corner” features a missionary article from an LDS writer and lists other articles that we have recently published. For example, this week we published these articles:

Collectively, these articles will form a huge library of gospel subjects to introduce people to the Church. Please visit our site:www.gospelideals.org. Take a look at “Mormon Beliefs and FAQ” and the ARTICLES sections. Here are some ways you can be an Internet missionary:

Michael D. Young is a graduate of Brigham Young University with a degree in German Teaching and a minor in Music. He played for several years with the handbell choir Bells on Temple Square and is now a member of the Mormon Tabernacle Choir. You can learn more about Michael here.