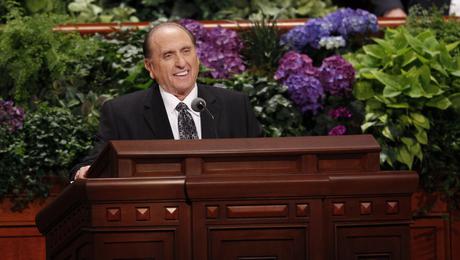 Not since the statement about the rebuilding of the Nauvoo Temple has the LDS membership responded with such noticeable gasps to a prophet’s General Conference announcement. When President Thomas S. Monson revealed in Saturday’s morning’s session that the age requirement for missionary service would be lowered to 18 for men who have graduated from high school and 19 for women, the ripple across the Church was immediate.

Teenagers began tweeting each other. Plans were suddenly changed. Our daughter’s best friend, a freshman in college, told her she wouldn’t be coming back next year. At BYU’s Jerusalem Center, tears flowed aplenty from young women, many of whom rushed to the bathroom for tissues. While the impact was immediate, young women seemed particularly affected, saying, “Now, I can go on a mission.”

“I’m bordering on giddy,” laughed Elder Jeffrey R. Holland, who discussed this announcement with the press.

Why is the Church making this change? Elder Holland said, “It means that God is hastening his work, and he needs more and more willing and worthy missionaries to spread the light and the truth and the hope and the salvation of the gospel of Jesus Christ to an increasingly dark and fearful world.”

The demand for missionaries is rapidly growing. “We are having requests from around the globe for new missions,” said Elder Holland. “It seems providential and wise to try and get the gospel to more people in more distance places than we’ve ever gone before.”

Sending missionaries out earlier also is not as disruptive to their future plans.

While the Church does not know what exactly the impact of this age requirement change will mean, it appears that the number of missionaries in the field will dramatically increase from the current force of 58,000. Elder Holland said that they expect that many will exercise this new option and next spring at high school graduation, the increase will begin to be clear.

“Suffice it to say, this will require some changes as to how we will administer the missionary department of the Church.”

Those changes include decreasing the time at the MTC, of which there are 15 around the world, by one-third, both for those learning a new language and those who are not. Elder Holland said that the Church excels at training new missionaries and this will not impact the quality of their work.

At the MTC in Provo new staff will be hired and there will be some construction of new facilities. Other international MTC’s will also see additional construction. The increase in number of missionaries will be considered in a systematic way to understand how to accommodate them.

It also means that prospective missionaries will have to come with higher degrees of personal worthiness and preparation so that they are ready to teach on day one of their missions. Parents are expected to take a stronger hand in assuring that their children are ready to serve.

President Monson said this new lowered age for a mission is an option and a wonderful opportunity. It is not an edict or a mandate. While young men are expected to go on a mission as a priesthood duty, leaving as early as 18 is a choice. Now, however, the option exists for a young man to be recommended by his bishop and stake president 120 days before he turns 18.

Elder Holland also noted that where young sisters serve they are often “stunningly successful” and acknowledges how this new option will allow many, many more young women to serve.

Two years ago when President Monson made his appeal for increased missionary work the numbers jumped with an increase of 6% for elders, 12% for sisters and 18% for seniors.

When asked if the Church had considered extending the length of service for sisters from 18 months to two years, he said they had considered it but were going to “take one miracle at a time.” Still “nothing is off the table.”

Elder Holland said that it is obvious that the Lord loves and trusts the youth of the Church to entrust them with the spreading the gospel to the world at this time of their lives.