The Mine: A "Faith-Friendly" Scary Movie? | Meridian Magazine

The Mine: A “Faith-Friendly” Scary Movie? 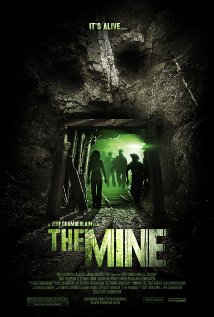 The Mine, an independent thriller from writer-director (and BYU alum) Jeff Chamberlain, has been a hit with teenage test audiences throughout Utah (where it was also filmed). And why not? After all, it’s being marketed to parents as “a movie you will enjoy watching with your teens without being offended by gratuitous sex, violence, and language,” and to faith leaders as a film whose “themes of personal responsibility, redemption, and forgiveness will allow you to put [it] on your approved’ movie list” (see the movie’s press kit).

Of course, The Mine aims to do all of this while also succeeding as a scary movie with some teeth. That’s quite a tall order for an independent thriller with a modest budget and only one widely-known star to speak of (Alexa Vega from Spy Kids).

I’m happy to report that, for the most part, The Mine succeeds in its mission. Its premise is simple: a group of small-town young adults chase some Halloween thrills in an abandoned gold mine, rumored to be haunted. The characters initiallyfollow clichd horror archetypes: the jock, the boorish oaf, the smart girl, the “hot girl,” and the minority character (who will likely die first, tradition holds). After the creative and chilling opening credits it appears, sadly,that the film is going to merely follow genre rules.

For much of the first half The Mine proceeds predictably (albeit with an effectively creepy central mythology), with saw-it-coming “jump scares” and one-dimensional characters.Chamberlain and company, to their credit, skillfully use lighting, cinematography, and editing to capture a sense of realistic claustrophobia through it all. 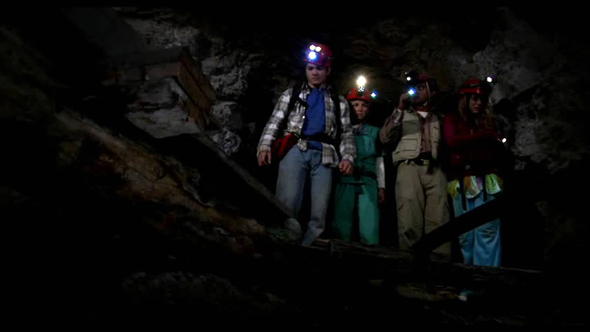 At around the halfway point the film starts to pick up steam on all fronts. It provides some truly effective scares and rackets up the tension with some genuinely surprising plot twists. Most importantly, it gives its characters unexpected layers, allowing the actors to stretch and make us care whether they live or die. Alexa Vega skillfully conveys both fear and grief, eliciting the same emotions from the audience. As “the jock,” Reiley McClendon wonderfully displays the remorse of foolish choices. As the intelligent girl with a dark side, Saige Thompson undergoes a riveting arch as she fights for life. Adam Hendershott has the thankless job of playing The Mine’s least likable character, but he wins you over by tapping into the relatable and pitiable emotion of panic. BYU graduate CharanPrabhakar is the very epitome of “cultural stereotype”and “comic relief” as an Indian named Ethan, but darned if his extremelylikable performance doesn’t win audience affection while getting the biggest laughs.

The film also makes good on its promise to tone done the offensive content so often found in this type of movie (though there’s some “red flags;” see the content overview below) as well as to provide discussion points (see messages to discuss, also below). That said, this is still a frightening thriller that deals with ghosts and the like, so if you’re the kind who thought The Sixth Sense was too dark and chilling, skip The Mine. On the other hand, if you or your kids like to be creeped-out but demand substance (and even some doctrinal truths) with your scares, this is the best film of its kind since Signs. Though it leaves some plot threads dangling and some questions unanswered, The Mine surprises as a nicely-crafted and atmospheric treat as we head into Halloween season, provided, of course, that you’re into that sort of thing.

CONTENT OVERVIEW: The Mine is rated PG-13. It contains some moderate profanity, but the filmmaker’s sensibilities thankfully prevented f-words and the misuse of God’s name from entering into the script. There is no sex or nudity, but there’s one innuendo and a scene of teenage girls trying on Halloween costumes, showing their legs, abdomens, and some cleavage. There is a bit of blood and gore, though it’s considerably toned down compared to other horror films. The second half has plenty of tension and a few shocking moments.

MESSAGES TO DISCUSS: As The Mine deals with ghosts, parents would be wise to discuss with teens (if they decide to see it) the similarities and differences between the film’s mythology and the truths of the Restored Gospel. In the film, departed spirits, good and evil, remain on the Earth. This is consistent with Brigham Young’s teaching: “Where is the spirit world? It is right here” (Discourses of Brigham Young, p. 376) and that of Joseph Smith that “the righteous and the wicked all go to the same world of spirits until the resurrection” (Teachings of the Prophet Joseph Smith, p. 310). Similar to the film, evil spirits have no power over us unless we give it to them: “All beings who have bodies have power over those who have not. The devil has no power over us only as we permit him” (Teachings of the Prophet Joseph Smith, p. 181). The film accurately asserts that strength over evil comes from purity of thought (see Phillipians 4:8) and that the greatest love is being willing to die for one’s friends (John 15:13). It also portrays that prayers offered in faith are answered (3 Nephi 18:20).

FOR MORE REVIEWS FROM THIS AUTHOR, PLEASE VISIT WWW.MORMONMOVIEGUY.COM. FOR MORE INFORMATION ON THE MINE, PLEASE VISIT www.themine.info