Creedal View of Godhead Not in Bible | Meridian Magazine

Creedal View of Godhead Not in Bible 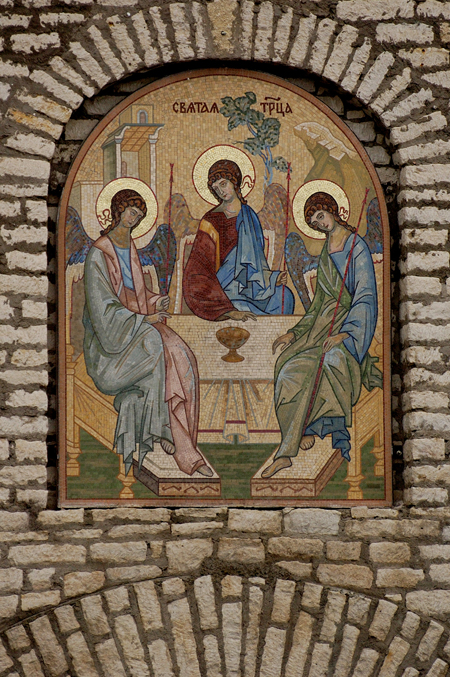 This is the first in a series called Treasures of the Restoration that explores the truths the Restoration brought back to us that were lost to traditional Christianity.  You might call them Joseph Smith’s bull’s eyes!

Most Latter-Day Saints are not theologians. Most of us do not engage in the study of other faiths or the history of Christianity. It is rare for members of the Church to read books about Christian theology. We do not require our local and general leaders to go to divinity school to master religious scholarship. We study the scriptures, but do not often pursue scholarly commentaries written about those scriptures. Most of us do not know the logic, conclusions or language of religious scholars. Their jargon such as ontology, hermeneutics, exegesis, eschatology is foreign to us.

We appropriately invest our time and efforts in developing a love of God and following His plan for us. This course matters far more than our knowledge of philosophy and theology. In place of studying the conclusions of religious scholars or theologians through history, we turn to the inspired counsel of modern day prophets and apostles who speak on behalf of the Lord.

But sometimes we may not have the framework or vocabulary to have a discussion about theological differences with those not of our faith. We may feel insecure about understanding or addressing the basis for their different beliefs. We might not feel adequately prepared to represent our doctrine to other Christians in a way that will make sense to them.

And having been immersed in the truths of the Restoration, perhaps some of us do not fully appreciate the elegance and strength of those restored gospel principles when compared to the doctrines of other faiths.Perhaps we could benefit from a deeper understanding of the clarity and wisdom revealed within LDS Restoration doctrines.

In this article and the series of articles to come over the next few weeks, I would like to explore the doctrinal treasures of the Restoration. My intent is NOT to encourage any kind of spiritual arrogance towards fellow Christians and their beliefs. A spirit of arrogance, superiority or contention will chase away the Spirit and discourage others from listening to our message.

My purpose is to encourage us to rejoice in the amazing truths given to us by the Restoration and appreciate the doctrinal treasures with which God has blessed us.

Let’s begin this series considering one of the commonest reasons many other Christians refuse to accept the LDS as fellow Christians-the fact that we do not subscribe to the traditional doctrine of the Trinity. Because of this, some claim that we do not believe in the same Jesus as those of protestant or evangelical Christian faiths. Some even perceive us to be polytheists, suggesting we are hardly better than the pagans of early history who worshipped multiple gods.

So is LDS restored doctrine regarding the nature of the Godhead at odds with what is taught in the Bible?

For the beginnings of an answer, let’s turn to the respected Bible scholar Bart Ehrman (who is not remotely LDS): “The only place in the entire New Testament where the doctrine of the Trinity is explicitly taught is in a passage that made it into the King James translation (I John 5:7-8) but is not found in the vast majority of the Greek manuscripts of the New Testament” (2009, p. 186).

There are two key points we can take away from this quote. The first is that there is only ONE place in all the New Testament that comes close to teaching the doctrine of the Trinity. It is not the uniform or common message of the Bible.

For the second point Ehrman is using a bit of code language. When he says that the passage was not in the earliest and best manuscripts, he is saying that it was a later addition to Bible texts. The one reference to the doctrine of the Trinity was not in the original text of the Bible. In fact he cites a tradition that Erasmus added the words in the sixteenth century under pressure from Trinitarians.

Let’s look at the one passage that is the basis for the doctrine of the Trinity. The passage, known as the Johannine Comma, reads:   “For there are three that bear record in heaven, the Father, the Word, and the Holy Ghost: and these three are one. And there are three that bear witness in earth, the Spirit, and the water, and the blood: and these three agree in one.” (I John 5:7-8 ).

In the manuscripts that Erasmus had, the passage read simply: “There are three that bear witness: the Spirit, the water, and the blood, and these three are one.” (See Ehrman, 2005, pp. 80-82.) Someone tried to force the doctrine of the Trinity into the text of the New Testament. When this late and unauthorized addition to the text is removed, there is not a hint of the doctrine left in the New Testament. The doctrine is simply NOT biblical.

Even if we granted the Johannine Comma, it is still a huge leap to go from that one passage to the Athanasiancreed that tried to establish and express the nature of the Trinity while wrestling with their physical natures and that greatest of all conundrums: their one-ness. Most Christians are unaware of the decades of bickering that led to the formula that is now accepted as the orthodox description of the Trinity. MacMullen (2006) described the tendency for the different factions warring over their understanding of God’s nature to actually attack each other. He estimated that 25,000 people were killed in the battles over the creed and its successors at Constantinople (381 CE) and Calcedon (451 CE). How Heaven must have wept as earthlings squabbled and bickered about the Prince of Peace and His Father! Given this history, it is difficult to assert that the creed which established the Trinity doctrine was based upon a commonly accepted interpretation of scripture–or that it was seen as a litmus test for Christians.

There really is no question. The doctrine of the Trinity was developed centuries after the books of the Bible were written. It is not the teaching of the Bible or early Christianity. It expresses more Greek philosophy than teachings of Jesus.

So the simple and unexpected experience of Joseph Smith that the Father, Son, and Holy Ghost are separate beings is not remotely at odds with the Bible. In fact it agrees beautifully with Stephen’s vision (Acts 7:55-56) in which he saw Jesus on the right hand of God.

It also agrees with Jesus’ intercessory prayer (John 17) where He prays that the disciples will be one the same way that He and the Father are one.

I don’t know anyone who believes that Jesus imagined the disciples being compressed into one substance. The Father, Son, and Holy Ghost are perfectly one in their purposes and actions just as the best of His disciples.


We could study dozens of passages in the Bible. We could study volumes of commentary. But the simple truth is that the modern doctrine of the Trinity is not biblical. Brother Robinson has expressed it directly (1991):

If Jesus didn’t teach the Nicene doctrine of the Trinity; if the New Testament writers didn’t have any conception of it; if the Apostolic Fathers didn’t know about it or even appreciate the problems associated with it; and if the formula itself wasn’t even developed until the fourth century and, even then, those who signed it didn’t understand it in completely orthodox terms; then one cannot maintain that the Nicene doctrine, as interpreted by modern Trinitarians, is essential to true Christianity, unless of course one wants to say that there weren’t any true Christians before the fourth century-including Jesus, his disciples, and the New Testament Church. (p. 78)

We can feel confident in proclaiming gladly–and biblically–that the Father, Son, and the Holy Ghost are separate beings each with a unique redemptive mission–just as we have been taught by both the Bible and the Restoration.

A new and expanded collection of Brother Goddard’s Meridian articles has just been published! The collection is entitled Modern Myths and Latter-Day Truths. You can order a copy here

Thanks to Barbara Keil for her superb editorial insight.

You can find many of Brother Goddard’s past articles by going to www.DrWally.org

If you are interested in additional ideas for personal well-being, strong marriages, or effective parenting, you are invited to sign up for a free resource we have created at the University of Arkansas Cooperative Extension Service. Navigating Life’s Journey is a weekly e-mail series that offers helpful ideas based on research so you can trust they will work in real life. To sign up for any or all of these resources, go to arfamilies.org

Ehrman, B. D. (2005). Misquoting Jesus: The story behind who changed the Bible and why. New York: HarperSanFrancisco.

Ehrman, B. D. (2009). Jesus, interrupted: Revealing the hidden contradictions in the Bible (and why we don’t know about them). New York: HarperOne. [See p. 81 for a discussion of the Johannine Comma.]

Metzger, B. M. (1964). The text of the New Testament: Its transmission, corruption, and restoration. New York: Oxford University Press. [This is the classic book on textual criticism. For a discussion of the Johannine Comma, see pp. 62, 101.]