Three different LDS women from around the world competed this week in track and field events at the London 2012 Olympics. 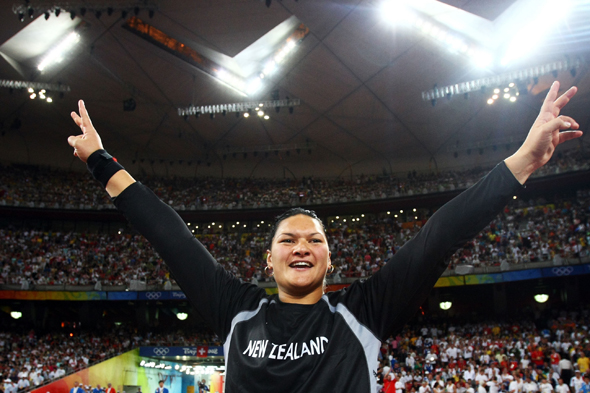 Valerie Adams represents New Zealand in women’s shot put at the London Olympics. This is her third Olympics. She won a gold in her event in Beijing, and a silver in London.

Adams was born in Rotorua New Zealand, to a Tongan mother (Lilika Ngauamo) and an English father (Sydney Adams). She showed potential at several sports, because not only was she exceptionally tall and strong, but she was nimble and athletic as well.

Adams improved exponentially after breaking into the international scene by winning the world youth title at Debrecen, Hungary, in 2001. Her career has been one of almost unbroken success. In 2003, when still a junior, she was fifth in the world championships in Paris. At the 2004 Athens Olympics, Adams finished eighth, while still recovering from an appendectomy just weeks before. She was unlucky in Athens. After her first three throws in the final she was ninth, so she didn’t qualify for a further three throws. Only later was one of those ahead of her disqualified for a drugs infraction. By then it was too late for Adams to get the extra throws she deserved.

At the end of the 2011 season, Adams had won three world titles, two Commonwealth Games gold medals and an Olympic gold medal – all this by the age of 26. 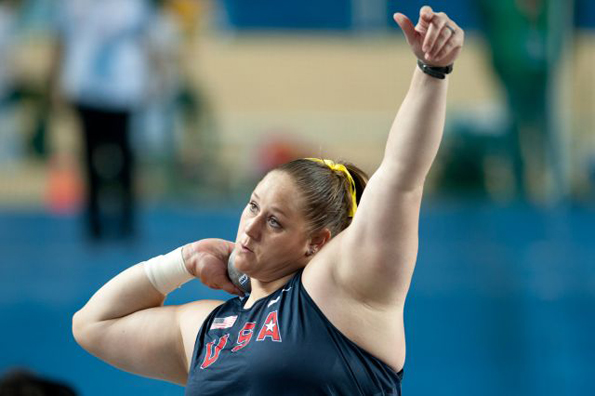 Jillian Camarena-Williams will compete in her second Olympic Games in the women’s shot put. She qualified for the U.S. team when she won the 2012 Olympic Trials with a put of 19.16m/62-10.5.

Camarena-Williams was the first American woman to win a medal in shot put at the 2011 World Championships, where she earned a bronze.

Knee issues and surgery to repair a herniated disc three months before the 2008 Olympic Trials nearly drove Camarena-Williams from the sport. But in Eugene she met Dustin Williams, a former distance runner and a trainer from BYU, who helped her with her knee problems. After the Olympics, the two struck up a romance and were married a year later. “After 2008, I didn’t really know if I wanted to continue,” she said. “I went back to school, met my husband, and through his support, physically and mentally, I was really able to get my fire back.”

Camarena-Williams was introduced to the sport in the seventh grade. Her older brother, James, the Woodland High School record-holder in the event, handed Jillian her first shot put when the two went out for a day at the local ring. 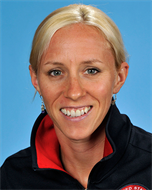 Becky Holliday represents the United States in women’s pole vault in her first Olympics. She is 32 years old and currently lives in Arkansas.

Holliday is an example of perseverance. After failing to qualify for the 2004 and 2008 teams, she tried again to make the 2012 team. Holliday earned her first Olympic berth with a second-place finish at the Olympic Trials. She placed tenth in the finals in London.

After failing to make the 2008 Olympic team – she finished sixth at the Trials – Holliday moved to the Olympic Training Center in Chula Vista, Calif., where she worked for a time with noted track coach Dan Pfaff. Living out of a dorm room, she managed to resurrect her vaulting career. In 2010, she finished second at USA Outdoor Championships and fifth at the Continental Cup. In 2011, Holliday finished seventh at Nationals and won bronze at the Pan American Games.

Holliday was born in Penryn, Calif., outside of Sacramento. Her sport of choice growing up was gymnastics and in the 1990s, her parents moved the family to Reno, Nevada so that Holliday could train as an elite gymnast. She was a four-time state champion in the all-around category in 12-16 age group and a three-time regional champion. As a junior at Reed High School, Holliday began pole vaulting. She finished fourth in the state in her first season before winning the state title as a senior.