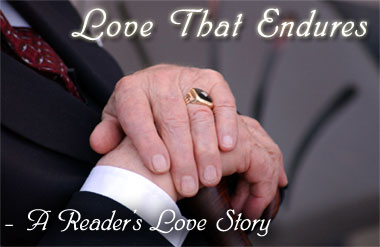 There is a magnificence in love that endures. Genuine love, the stuff of which dreams are made of, is not meant to last for only a fleeting moment. It is meant to be experienced deeply over a lifetime and beyond. Such love does not come easily or cheaply into our lives. It requires something of us and it challenges our capacities to care, to forgive, and to endure.

What is it that genuine love in marriage and family relationships endures? Time. Loss. Heartache. Little frustrations. Major milestones. Big disappointments. Seasons of sadness. Seasons of joy. As I have read and re-read many love stories that came to me over the last month, I have noticed that many of them illustrated a love that endures all these and other things. Such love is worth striving for.

Perhaps the most striking example of enduring love in modern Latter-day Saint culture can be seen in the loving marriage of our beloved Prophet and his wife, President Gordon B. and Sister Marjorie Hinckley. For over sixty years they have shared the travails of life and walked through the sunshine and rain together. It is readily seen in the accounts of their life together in President Hinckley’s biography, Go Forward in Faith. It is a testament of love. They have talked together. Laughed together. Wept together. Built homes together. Raised children together. Prayed together. I have often wondered whether an enduring love in marriage or family relationships is not the single most important achievement of mortality.

One Meridian reader who responded to my call for love stories, L. Gordon Harding, shared this poignant memory of enduring love:

The six little Gordon children grew up surrounded by love. If there was one thing we knew as children it was that Momma loved Daddy and Daddy loved Momma. . . . Their Love Story lasted on Earth over 56 years-his dark hair turned white, her lilting voice silenced by a brain tumor-their love grown deeper through selfless service. She quietly passed away one November morning. In quiet moments I can still hear her singing, “I’m so glad when Daddy comes home.” I am sure she has a place all prepared, her eyes bright, lipstick fresh with her beautiful hair brushed-just waiting for our Daddy to come home to her.

A child who grows up surrounded by love is much more likely to create such love in his or her own life. We should each consider our own lives and relationships, and what we are doing to create such enduring love.

Among the many love stories shared with me by Meridian readers recently, a particular one captured for me the power of enduring love. It was shared with me by a member of my stake presidency and dear friend, President Carl Johnson, and recounts the life and love of his own parents. The story, in his own words, follows.

This love story began in late 1939, and even though death has caused a temporary separation, it continues, and will continue through eternity. The moviemakers of Hollywood released a blockbuster that year. All the youth were anxious to see “The Wizard of Oz.” Doris Kirkham had accepted a date with a young man who had a crush on her. They went to see the movie at the Paramount Theater in Idaho Falls, Idaho, the classiest theater in the area. The movie was everything spectacular that they had hoped for and Doris found herself enjoying it.

During the intermission, her date left for a few moments to buy some popcorn and candy. As soon as he was gone, she felt a tap on her shoulder. She turned around and found herself looking into the smiling blue eyes of Maurice Johnson, a young man she had seen at church and had been interested in for some time. He leaned toward her and, before her date returned, quickly asked her out for the next night. From this time on, they seldom went out with any others and, if they did, it was with a definite lack of interest.

Their love blossomed over the next two years and “Somewhere Over the Rainbow” became their love song. December of 1941 found them united in marriage in the temple in Salt Lake City. This was a dark time to begin a new family. War covered the world and this young couple watched friends leave to fight. Some never came home again, and some, when they did, were not able to cope with life after what they had seen.

Maurice was a farmer, and so the government preferred having him remain home growing food needed for the war effort. However, the threat of separation hung over them like a dark cloud. The time came when even he was called to fulfill his duty. He was assigned to the Navy and after his basic and technical training received word that he would be assigned to an assault landing craft in the Pacific theater.

The time for departure grew closer and closer until finally November of 1944 found them back in Salt Lake City again. This time, Maurice was to board a train, which would take him to war and a very uncertain future. He would be leaving behind not only Doris, but also their first child who was expected at the end of January.

During the hours before parting they walked the streets of the city looking in the windows while holding hands. Occasionally tears would fall and they would stop and embrace, trying to make time stop. At one point, Maurice noticed a beautiful watch on display, which he stopped to purchase. He thought, “This is something she can have to remember me by while I’m gone, and she’ll still have it to give to our child if I don’t return.” On another occasion, he saw a corsage made of silk flowers that he bought and pinned on her coat. He told her that the beauty of the corsage was very plain in comparison to her.

Finally the time arrived, and Maurice left on the train. The last they saw of each other that night was a glimpse through the window as the train left the depot. The next ten months went by very slowly for Doris. Each day she would waken to a dark feeling that caused her to wonder if this was the day she would receive a visit from a Western Union delivery man, accompanied by her bishop.

But the Lord blessed them, and both were ecstatic with the announcement that the war had ended with the surrender of Japan in September of 1945. Maurice was not able to return home until the spring of 1946, but while they missed each other, the numbing worry of him not returning to his little family was no longer there. Their reunion was everything they had hoped for and the joys of family life on the farm began.

Now, the only thing that separated them was the hours demanded of Maurice because of church callings, however both gladly gave this time.

Time sped by, and 27 years later they found themselves as the speakers at a Stake Primary Christmas party. Maurice was serving in the Stake Presidency and the Primary leaders had asked him and Doris to come and tell them about special gifts that they had given to each other. Maurice went first and in his humble way helped everyone remember that giving is much better than receiving.

Now it was Doris’ turn. She stood up and recounted the story you have just read. At the conclusion of the story, she held out a box, removed the lid, and produced a corsage made of silk flowers. The pretty colors were dimmed by time, but it was the same corsage. Maurice broke into tears. He had remembered the watch he had purchased of ensure her remembering him, but had forgotten about the corsage. He had not known of its existence in Doris’ cherished keepsakes. The feelings of love and joy of the many years since came flooding into both of their hearts. Those in attendance listening felt the same spirit.

Many more years have passed since that time. But every year at Christmas, the corsage is displayed along with the other decorations at that special time of year. The children and grandchildren of this celestial couple have learned the meaning of it and the eternal love it represents.

Maurice passed away quietly while sleeping in June of 1999. He was on the sofa watching Lawrence Welk with his sweetheart. And while circumstances have required their separation, Doris and all of her family know for a certainty that the separation will be temporary. Shortly after Maurice’s passing, Doris sent the following quote in a family letter for her posterity to read. She explained, “These lines best describe my feelings.”

She wrote: “My love would never leave me. It’s true his body sleeps in the beautiful cemetery. Loving hands will bring flowers, and grass will grow over his resting place. The birds sing above him in the sunshine. Snow will cover him like a soft warm blanket and years will come and go. But always his spirit will walk beside me – so very close. One day I will walk into the golden sunset and find him waiting to greet me.”

I love this story because it shows so clearly the magnificence of enduring love in married life. Indeed, it shows what it means to believe in enduring love.

We too often speak glibly of love. We liken it to a passing passion or link it to a shiny trinket, when in reality it is nothing of the sort. Enduring love is a power. It is a genuine power that changes our vision and changes our relationships forever. It is faithful and it is eternal. Love that endures all things is made possible because of He who endured all things for us, and who grants it to us as a gift.

Paul the Apostle, in writing to the Romans, asked:

Who shall separate us from the love of Christ? shall tribulation, or distress, or persecution, or famine, or nakedness, or peril, or sword? (Romans 8:35)

And his answer? We cannot be separated from the love of Christ because it is a power that endures all things. He writes:

For I am persuaded, that neither death, nor life, nor angels, nor principalities, nor powers, nor things present, nor things to come, nor height, nor depth, nor any other creature, shall be able to separate us from the love of God, which is in Christ Jesus our Lord. (Romans 8:38-39)