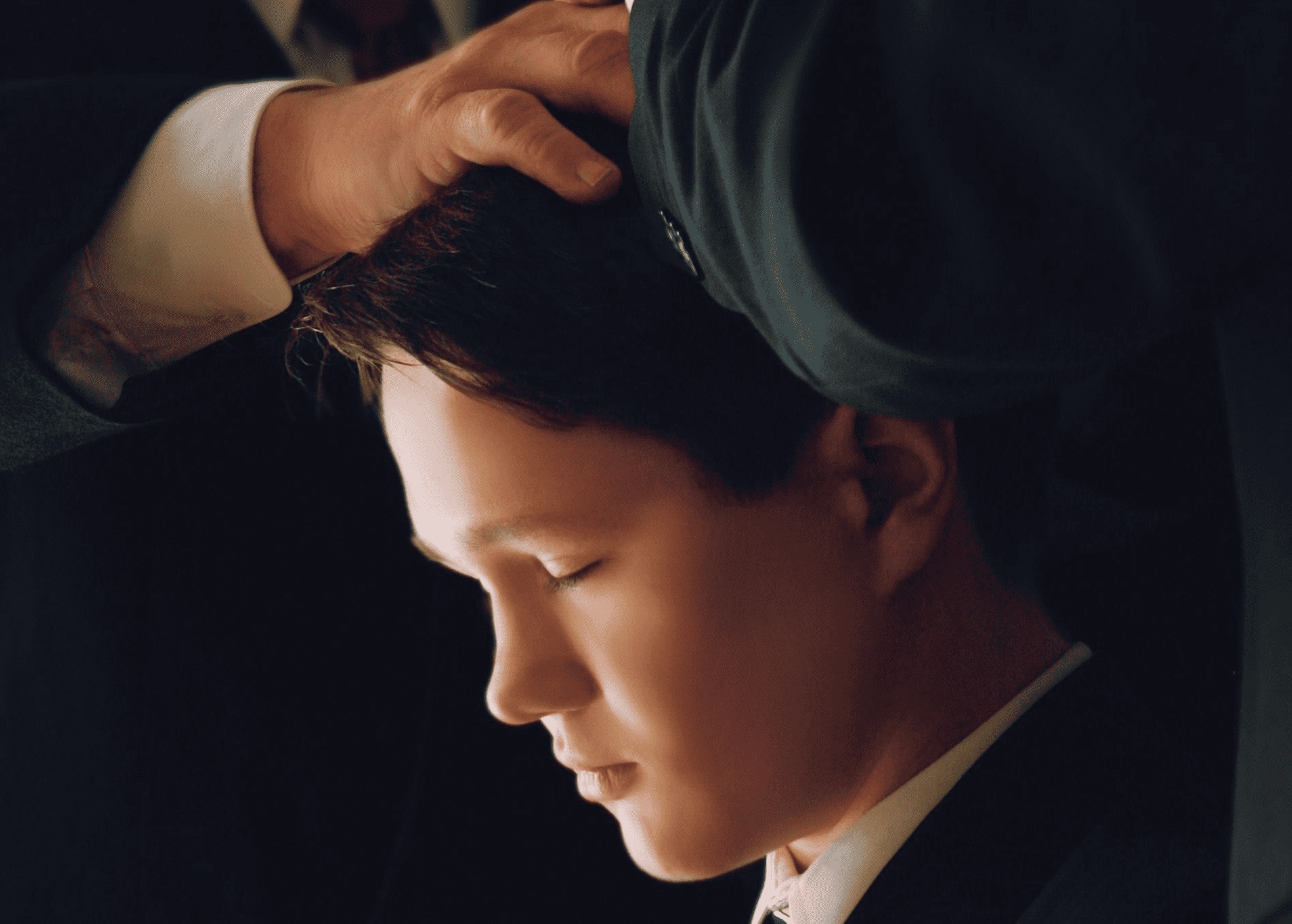 As beloved children of the Most High God we have profound connections and privileges that at sacred moments are revealed to our awareness.  One of these occasions comes when priesthood blessings are bestowed.  Sometimes these blessings are assisted by angels…

Charles Harper shared a poignant experience of being succored by angels in giving a priesthood blessing.  He wrote,

“My parents were on their way to visit my father’s family when dad had a heart attack. We are converts to the church, and dad and I were the only ones in the family who were blessed with the priesthood. I received a phone call asking that I come and give dad a blessing.

“I felt so alone in the hospital room as I laid my hands on his head to give the blessing, but as I did, I became aware that the room was filled with priesthood holders who were there to be part of the blessing.

“My mother’s efforts to find ancestors had resulted in the ordination of several departed family members who were there to help me anoint and bless dad. I didn’t see them, but I could feel them and knew they were there.” [1]

Authority of Departed Family Members to be Involved in our Lives

When angels come help or succor us in any way, it’s because they have been given God’s divine authority to do so.  Thomas S. Monson quoted Joseph F. Smith’s witness about angels when he wrote,

“…authority that has been given in this day in which we live by ministering angels and spirits from above, direct from the presence of Almighty God.”[2]

The fact is our family is “family” whether on this or that side of the veil.  They seem to keep tabs on us and in our extremities and are often given permission to succor and help us.

A good friend Matt Hill told me about a time his sister asked him to give her a priesthood blessing.  She was not yet married and was preoccupied that she was getting older with no spouse.  She wanted direction.  As Matt put his hands on her head and began the blessing, he strongly felt their grandfather give the blessing through him to her.   He writes,

“The message was simply to relax, and that in due time things would play out, and she WOULD find her mate.  Eventually that is what happened, and she did get married. The message, however, at that time was exactly what she needed to hear to bring her hope and it was delivered by her loving grandfather from the other side.”[3]

How touching for her to know that her Grandfather cherished her enough to give her specific words for her life through her brother.

Bill Brough shared an intimate awareness he had during his son’s priesthood ordination.  He wrote,

“Over the last twenty years or so I have had numerous experiences where I have felt the presence of a family member at spiritual times. In one, I was ordaining my teenage son a priest. That was an occasion I would have wanted to share with my own father, who had ordained me, and so whose priesthood lineage was also mine, and was likewise my son’s. But my father had recently passed away, as had my son’s maternal grandfather a few year’s prior. As I stood in a priesthood circle, with one hand on my son’s head and the other on another priesthood bearer’s shoulder, I suddenly realized that his two grandfathers were, in fact, part of that circle as well, invisible to my eyes but present nonetheless.

Somehow, I could feel them, in a way that can’t be explained, and made a point of saying so in my son’s ordination, so he would know that his relatives on the other side were involved in his life.[4]

These are experiences that are poignant and tender and are forever emblazoned in the memory of those who are blessed to have them.

In the following account, a preborn spirit witnessed a priesthood blessing that aided him in fact, coming to mortality.

Son Observing Priesthood Blessing Before He Was Born

Ronald Barnes told me about an unusual experience he had.  He wrote,

“My wife, Colleen, and I had two daughters, Tara and Laura, when she was pregnant with our third child. Several times during the pregnancy, Colleen felt that there was something wrong with the baby. Each time I blessed her with a priesthood blessing that everything would be alright. When our son, Michael, was born, it was discovered that there was a knot in his umbilical cord. Had it tightened; he might not have survived.

“When our son, Michael, was about 6 years old he told us about an event that happened before he was born. At first, he said he was surrounded by a pink light, then he was in our living room, observing the rest of us. We were dressed in our church clothes. Michael’s sisters were sitting on the couch, and I was standing before Colleen with my hands on her head as if I were giving her a blessing.

“I believe that he saw one of the times that I blessed his mother-to-be because she knew something was wrong with him. I feel that the blessing he saw actually saved his life.”[5]

Although Michael apparently wasn’t a part of the blessing, he as a pre-mortal being, was there as a witness.  Pre-mortal as well as post-mortal family members want to be a part of our lives.

Debra McCracken told me about a marvelous realization she had during a priesthood blessing.  She said,

“Several years ago I tripped and fell while walking back from lunch where I worked. It was extremely painful and I had to have surgery to partially replace my right shoulder. I had several setbacks and extended hospitalizations and rehabs. During my second rehab stay a close family friend and my husband came to give me a blessing one night. I was tired and in pain and wondering how I was going to continue with recovery. As they laid their hands on my head, I felt the blessed and familiar feeling washing down through my body that the Holy Ghost can

give, and I sensed four men standing behind me, not two. I felt that one of them was my father, who had passed away a few years previously,–but who was the other man?  Suddenly I was overwhelmed by the realization that it was my baby brother who died the same day he was prematurely born many years ago.  I had never seen him, but always thought of him as a baby.  I realized it was him; an adult in the spirit world, and he was assisting in my blessing. This has been one of the most spiritual and comforting experiences of my life.”[6]

Loving Associates on Both Sides of the Veil

A beautiful quote from Elder Holland gives an echo to these stories when he said,

“…the Holy Ghost, angels in Heaven, family members on both sides of the veil…All of these and more have been given as companions for our mortal journey…”[7]

They are given to us as spiritual companions, and sometimes, we can feel them with us…

In this final moving story, a departed father comes directly to keep a promise…

Departed Father Comes to Keep His Promise and to Heal Son

Don Woods relayed a stunning experience of his departed father returning to give him a priesthood blessing. He and his father had been very close.  On the night before he died, his father came to him at 1:30 in the morning telling him several things he needed to be doing in his life and informing him why he had to die at that time.  He told Don that he would be with him and help when he had medical emergencies.  Later Don became extremely ill with cystic fibrosis and had a severe bowel blockage.  He wrote,

“In August 1992, when I was in so much pain… (morphine shots administered every two hours were not helping), one night at three in the morning, I cried out: ‘Lord, what did I do wrong?’ I also cried: ‘Dad, you promised you would be here!’ Suddenly my father was at my bed and I felt him put his hands on my head. Within a few seconds, there was a feeling as if someone were pouring something warm over my body. It cascaded from my head to my toes, and the pain left. My father smiled and then he left. The next day I began passing the stones.”[8]

I loved each of these profound stories. It appears that events that are important to us, especially life-threatening ones, alert the angelic realm.  Consider the possibility that your departed love ones have and will come from beyond the grave to observe and strengthen you in your times of need.  It’s one of the privileges we can live up to as beloved children of the Most High God.[9]

[9] “If you live up to your privileges, the angels cannot be restrained from being your associates.”

– Joseph Smith, History of the Church (directed to the members of the Relief Society), 4:605.

Dear Anne, Oh how comforting this reading was to me! May the Lord bless you for relating such stories. Those are troubled times and it helps so much being able to "see beyond the veil". May you be greatly blessed for your stories.

Thank you for sharing these beautiful experiences with the readers to lift us and remind us how think the veil can be! I have "felt" my own grandmother come to me and knew she was near and watching out for me. It was a remarkable experience. Thank you for the uplift today Anne.