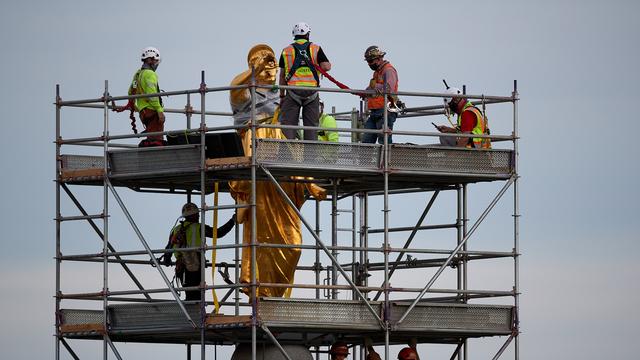 In the latest stage of the renovation of the Salt Lake Temple, the angel Moroni* statue and circular capstone beneath its feet were removed from the temple’s central east spire. These historic items were carried Monday morning through the air to the ground via crane for preservation and refurbishing. This will prepare both items for a later reinstallation.

“The Salt Lake Temple is the house of the Lord, and it is being shored up and strengthened to be able to stand for generations to come,” said Andy Kirby, director of historic temple renovations. “Each aspect of this project plays an important role in helping this sacred structure to remain a symbol of permanence, optimism, and faith for people around the world.”

The removal of the statue and capstone had long been planned as part of the temple’s years-long structural and seismic renovation. The timeline for this portion of the project was sped up following a 5.7 magnitude earthquake in March 2020 that shook the trumpet out of Moroni’s right hand and caused other minor damage.

While no crew members were injured during the quake, Paul Lawrence of Jacobsen Construction said the trembling earth was a reminder of the importance of a seismic upgrade.

“The earthquake loosened some of those pieces [on top of the temple],” said Lawrence, the renovation’s seismic project manager. “And in order to make the surrounding area safe, we’ve simply had to move those activities forward and take them off now instead of later. The recent event that we had simply reinforces the vision and direction that we’ve been given to strengthen the temple.”

The renovation of the historic building will include the installment of a base isolation system to help the building withstand a 7.2 magnitude earthquake. Lawrence said this system connects the base with the temple roof through secure rods and cables in the towers to protect the building from further damage.