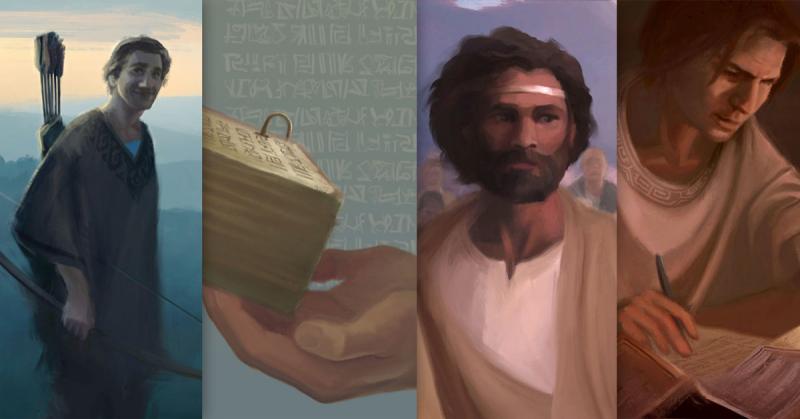 This week for Come, Follow Me, we study the short series of books filling in the gap between Nephi and Jacob (both members of the founding generation of Nephites) and King Benjamin (who reigned about 476 years after Lehi left Jerusalem). Naturally, we would all love to have more information about this period in between. It’s impossible to fill-in all the gaps, but as with other parts of the Book of Mormon, I find that looking at ancient perspectives brings additional light on this brief section of the Nephite record.

So here are 4 ancient insights into these four short books—one for each book.

Enos begins by imitating Nephi’s introduction to 1 Nephi, but modifying it so that instead of punning on Nephi (Egyptian for “good”) with mention of “goodly parents,” he puns of off Enos (Hebrew for “man”) by referring to his father as a “just man” (Enos 1:1). Enos’s father, of course, was Jacob, named after the patriarch Jacob. This is important to point out because he is going to talk about the “wrestle” he had with God (Enos 1:2)—reminiscent of the wrestle Jacob the patriarch had where he saw God face to face (Genesis 32). Much of Enos’s narrative makes allusions to the story of Jacob’s wrestle with God, and includes various wordplays on the name Jacob. Enos concludes, “then shall I see his face with pleasure” (Enos 1:27). Not only does this tie back into the story about Jacob seeing the face of God when he wrestles (Genesis 32:30), but it also appears to be an allusion to Job 33:26, including a wordplay on his own name—Enos (“man”): “and he shall see his face with joy: for he will render unto man [enoš] his righteousness.”

2. Jarom: Changes in the Art of War

In Jarom’s day—which was between ca. 400–360 BC (Jarom 1:5, 13)—he mentions that the Nephites “began to fortify [their] cities” and make “weapons of war—yea, the sharp pointed arrow, and the quiver, and the dart, and the javelin” (Jarom 1:7–8). There had been wars with the Lamanites since Nephi’s day, so what was going on in Jarom’s time that would force the Nephites to fortify their cities and specifically develop various types of projectile weapons?

Turns out in Mesoamerica around the 4th century BC, the nature of warfare was changing. Militarism was being professionalized, which led to specialized weapons and increased fortifications—exactly what Jarom said was happening among the Nephites. Furthermore, Jarom mentions three different kinds of projectile weapons—arrows, darts, and javelins. Sharp and deadly spears and other projectiles developed by the Olmec were specifically the kind of “specialized weapons” spreading in Mesoamerica ca. 4th century BC, and in Mesoamerica, there were likewise three different kinds of projectile weapons: arrows shot by a bow, darts launched from atlatls, and hand-thrown spears (i.e., javelins).

The Nephites in Jarom’s day were evidently being forced to adapt to the more sophisticated arts of war being developed by their surrounding cultures and the threat such developments posed to their cities.

When the Nephites meet the people of Zarahemla, they bring Mosiah a “large stone,” which was engraved with writings from Coriantumr—the last Jaredite king—talking about the great war fought during his reign, and also discussing his ancestors back to the origins of the Jaredites (Omni 1:20–22). Based on the description given in the Book of Mormon, it sounds like they are describing what a scholar today would call a stela. The ancient Maya called them lakam-tuun, a term that literally translates as “large stone.” Stelae (the plural form) in ancient Mesoamerica typically memorialized the king, often depicting him as a warrior, documented his accomplishments or actions, and listed his ancestors. This is broadly consistent with Coriantumr’s stela. Interestingly, the practice evidently began in late Olmec times, which corresponds chronologically with the final days of the Jaredites.

4. Words of Mormon: A Late Introduction

Once we finally finish reading the small plates, we get a brief editorial note from Mormon explaining what these “small plates” are and why he included this material with the rest of his record (Words of Mormon 1:1–11). In other words, Mormon introduces the small plates to his readers, which seems like an odd thing to do at the end, rather than the beginning. The title page—which is printed in the front of the Book of Mormon today—was also at the end of the plates, on the very last leaf, according to Joseph Smith. It might seem strange that Mormon (with Words of Mormon) and Moroni (with the title page) both placed introductions at the end of these records, but it is consistent with an ancient Near Eastern practice known as subscriptio, where information like the title of a work and the author’s name is placed at the end of a text, rather than at the beginning.

As always, there is so much more that could be said about each of these insights, and there are many additional insights that could be gained reading Enos, Jarom, Omni, and Words of Mormon from an ancient perspective. But I hope these brief comments prove useful to you as you study these short, but interesting books this week.

Dan Guasp, I think you missed part of that sentence... the gap was basemen Nephi and Jacob, AND King Benjamin! Go back and read that sentence and see if you agree!

These 4 books come after Jacob not in the gap between Nephi and Jacob or did I miss you intent.