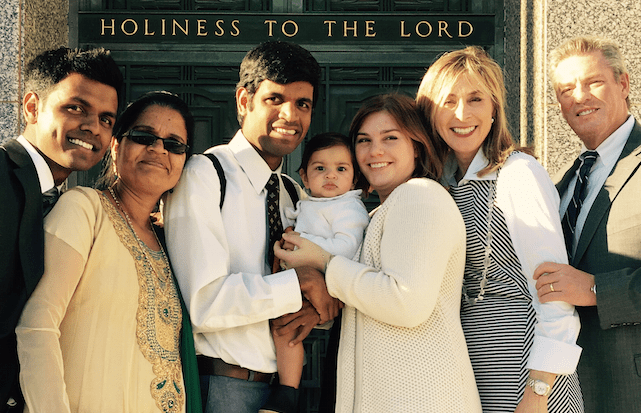 An Unforgettable Lesson in Gratitude

Becky Douglas is the founder and president of Rising Star Outreach, an organization dedicated to helping those in the leprosy colonies in India. To find out how you can help, click here.

Two little boys were ushered by their mother into the smoke-filled room where we were waiting. She had just brought them from a leprosy colony. Stick thin and shy, they clung to her saree. The cramped, dark space was home to 25 children, all of whom were “untouchables” for one reason or another. Some were handicapped, some orphans, some were from leprosy colonies. One girl, Devi, was afflicted with progeria, the disease that makes you age rapidly; though only 13 years old, she looked as if she were in her thirties. Several of the children were unable to walk due to either birth deformities or polio.

Cooking was done inside the home over an open fire, and thus the smoke clogged the air and hung between us. I tried to approach the older of the two: Daniel. His mother told us that he had suffered from leprosy but had been cured. His arm was wrapped protectively around his younger brother, David. Trying to break the barrier and engage them, I reached into my purse and brought out two new children’s toothbrushes. I squatted down, so that I could look into their eyes and held the toothbrushes out to them with a smile.

At first neither moved. But finally, curiosity got the better of them and Daniel reached gingerly for the toothbrushes. They had never seen such a thing. I pulled another from my purse and showed them how to brush their teeth. They were fascinated.

The mother was destitute, and was in hiding from the boys’ father who was terribly abusive to both her and the boys. Fearing for their lives, she had fled with only the clothes on their backs. She didn’t want her children to have to beg in order to survive so she brought them to this home. She lingered over dinner with her two beloved boys, then kissed them both tenderly and slipped out the door. They found a little space between other sleeping children at bedtime. 25 children were sleeping in a room about seven feet by eight feet. With arms still wrapped around each other they fell to sleep with exhaustion.

The man running this home had promised the mother that he would send the boys to school, and for the first year things went well.   But over time we became more and more concerned about the way children were being treated in this home. There were also many financial inconsistencies and with the unwillingness of the director to make changes, we were forced to end our association with him.

Before long David and Daniel found themselves kept out of school to help this man construct a new home. They forcibly labored long hours in the heat of Southern India. They lived on only rice and water. The two skinny boys got skinnier.

The next time I saw the boys I had learned about what was happening in this home and came to rescue the boys. There was a scene. The man running the home angrily told me he would never agree to send them to the new children’s school we had started. After threatening me, I left—without the boys.

A young mother in Arizona, Lynn Allred, had seen a picture of these two boys at a fireside I gave. Lynne told me that she was convinced that she was to help with these two boys. We all began to pray that the man running the original home would have his heart softened. A long time passed.

On a subsequent trip to India I was pleasantly surprised to enter the Rising Star Children’s Home and see Kala, the boys’ mother. She had come to work for Rising Star as a housemother. She told us that the man running the original home would not allow her boys to leave and even threatened to charge the mother with abandonment of the boys if she tried to remove them.

We all redoubled our prayers for the boys. Then wonder of wonders, on my next trip to India I was stunned to see both David and Daniel at Rising Star Outreach. They were even thinner than I had remembered them. They had been so starved that Daniel, although fourteen, still had not had his voice change.   His body had not received enough nutrition to go through puberty and he still had the high-pitched voice of a small Indian child.

They were much older than our other children who were all pre-schoolers, but they were beloved by all the children. They acted almost as surrogate parents; they calmed crying children, played with all the kids and helped with schoolwork.

During all this time, Lynn had worked tirelessly to find a way to bring the two boys to America. At that time if they came on a student visa they had to attend a private school, as the State Department wasn’t willing to allow US taxpayers to foot the bill for their education. Miraculously, she was finally able to find a private school that was willing to accept them even though they were years behind in their studies and didn’t speak English. The school was a Christian school and required that the boys record their testimony of Jesus as part of their admission requirements.

On my next trip to India I excitedly told the boys about this remarkable opportunity. We were required to contact the father, who not only refused to cooperate, but threatened to kill them if they left India. He would relent only if the mother returned to live with him. Again, through the mercies of prayer, the father finally relented and agreed to let the boys go.

My dear friend Sharon Thompson was with me on this trip. We both grabbed an interpreter and sat down with the two boys to record their testimonies of Jesus. I listened while Daniel told his feelings about Jesus. I was surprised to learn that Kala was actually a member of the Church. She had not been allowed to attend Church by her husband, but she had carefully taught the boys about their loving Savior. Daniel’s testimony was simple and incredibly sweet. I had the interpreter read his testimony back to him and then asked, “Is this everything you’d like to say?” Daniel paused only for a moment before adding earnestly, “Please add that of all the boys in the world I feel that I am the most blessed.”

I could hardly believe my ears and tears involuntarily stung my eyes. This boy who owned only the clothes on his back, and had been afflicted with one of the most dreaded diseases in the world—and thus branded as untouchable; who had been forced to run from a violent father and been given to a cruel man to raise, who had been forced to work in the hot sun as an unpaid laborer instead of attending school, who had been separated from his loving mother, who had recently had his father threaten to kill him, and who had endured all kinds of unspeakable privation—still had his heart overflowing with gratitude. I thought wryly, “Well, with all that I’ve been blessed with, I must be the most ungrateful woman in the world!!”

All this time I thought I was going to help Daniel. In reality, I wasn’t lifting him as much as he was inspiring me! That night he taught me in an unforgettable way that gratitude has nothing to do with what we have, and absolutely everything to do with our hearts and our humility. Since that night, when I am feeling beset with problems and challenges that seem overwhelming and I find myself tempted to whine, I remember the skinny young boy, filled with gratitude who taught me to be thankful in all circumstances.

Note: The boys did come to study in America. They not only learned English but graduated from High School here. They went on to LDSBC and have both graduated from there. Daniel is now studying Hospitality at BYUH and David is studying business at BYU. Daniel is married to a wonderful young lady and they are the proud parents of a charmingly beautiful little girl, Saroja Rose.

I was one of Daniel and David's teachers at Faith Christian School. What a blessing it was for me to be a part of their lives and help them on their journey.

Thank you for what you do!!!! We pray for you often. I read this story with tears in my eyes! I am retired, but used to work in TB, which is a closely related disease, but manifests itself differently. They also used to be unloved and untouchable. Until 1949, when Streptomycin became available: now if they get streptomycin, they are cured.! Your love for these children shines like Christ's love for us. You truly have been sanctified. John Nicholson..