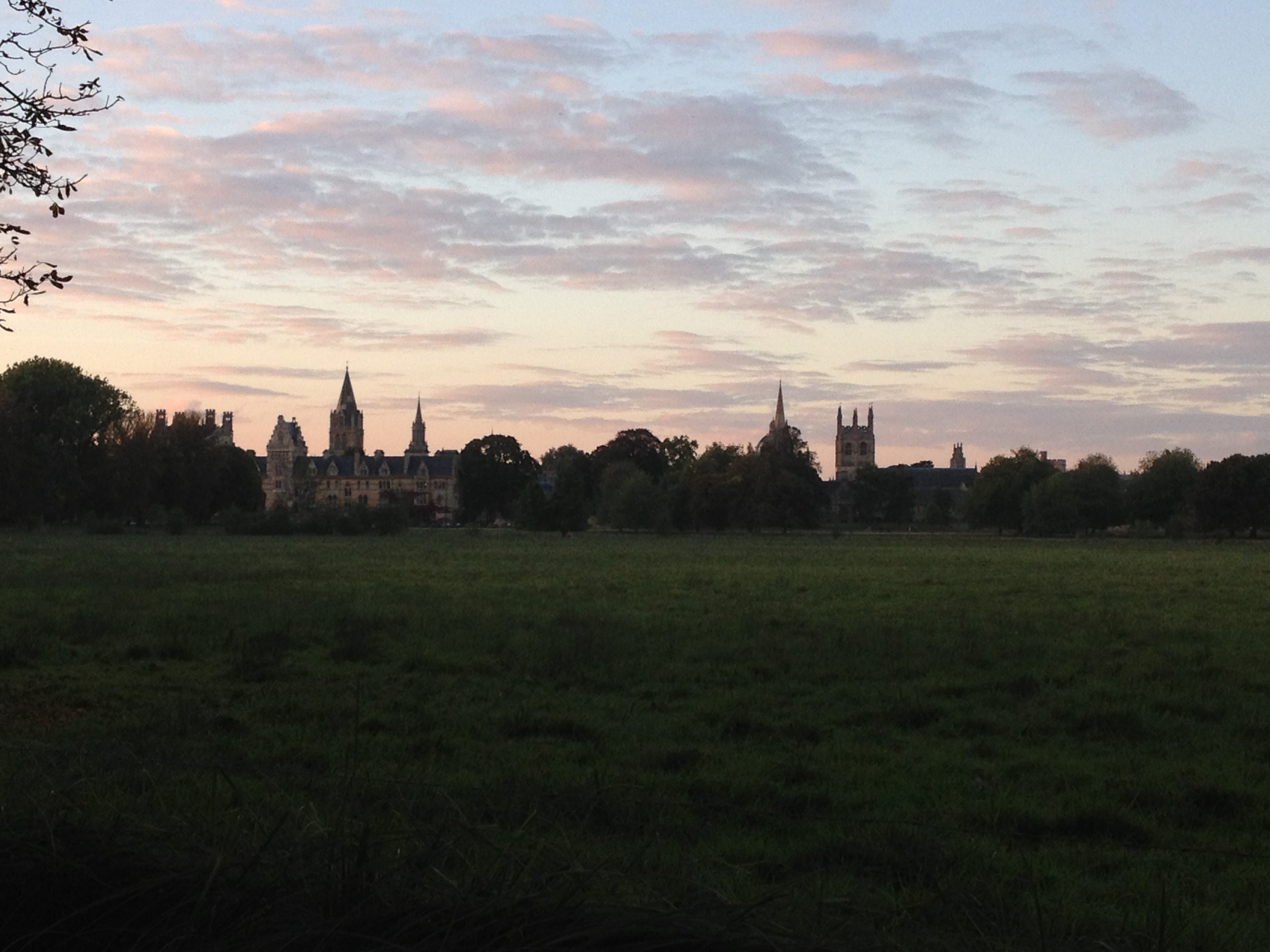 An American Mormon at Oxford

All photos in this article were taken by Mariah Proctor.

“Oh I don’t drink,” I said. The older gentleman looked at me, confused. “Then why did you come?”

He was making a fair point since it was an Oktoberfest celebration and beer seemed to be the main course for most people. To be clear, I came for the soft pretzels and the oompah band.

But his question is one of many variations on that theme that I imagine I will hear a lot over my next two years as an Oxford student. I never really planned to go to grad school, but when I was at BYU, I was sure that if I did go, I would at least make sure that I went someplace that would give me a completely different collegiate experience than I had already had. With classes that now feature the tutor saying, “Well anyway, the bar’s open so—“ at day’s end, I think I’ve achieved my institutional variety.

An Oxford education isn’t all about drinking (though thousands of students may smile to themselves and disagree), and I already feel they’ve made a place for me there—teetotaler though I may be.

I visited Oxford first when I was seventeen. I was struck by the beauty of the place and the sensation that these stones and parapets seemed to hum with history. These trees were the same trees that Tolkien had in view when he created Middle Earth, that C.S. Lewis spied while he penned tales of Narnia, that shaded Lewis Carroll as he fashioned Wonderland.

It was also the height of the world’s love of the Harry Potter books at the time, as the last book in the series was about to come out. The fact that the dining hall in one of the colleges was used in part for the Great Hall of Hogwarts in the Harry Potter movies didn’t hurt my enchantment either.

Either way, I was enthralled by the place.

But I was never going to get in. So though my high school best friend and I dreamed up scenarios in which we would be attending a university that is older than the Incan empire and the English language, I never intended to actually apply, because I never thought I could possibly get accepted.

That seems to be a universal theme among the Freshers (the British term for new students) that I’ve met in my first term at Oxford. Most of them seem to be totally shocked that they even got in.

Maybe I’ve somehow managed to dodge the cliché Oxford student, groomed since childhood to be here, but everyone I meet seems to giggle and whisper, “I don’t even know how I got here.”

It is easy to be intimidated by the idea of this place. I can’t attend the same school Stephen Hawking did, I’m just not smart enough for that (and if I were in his field of study here, I’m TRULY not the right kind of smart for that).

I was sitting in a courtyard in the third night of my residency surrounded by fellow students and some of the tutors. The spot was lovely and there were tall trees with their branches sprawling out over us giving a sort of autumnal mystery to the moon above us.

Unfortunately, where there are branches, there are often birds and in mid-conversation a gift came from above and landed directly on the head and shoulder of one of the tutors. Apparently birds don’t even bother to check credentials because I quickly learned that it was the second time in the same night that that magpie had pooped on that professor.

When it happened, the head of my program–the same lady that intimidated everyone out of their minds in personal interviews with the very direct and unavoidable question of, “how much of the reading list did you actually do?”–laughed so hard, she cried. Observing that moment managed to quell most of the remaining intimidation factor of being instructed at this university. You just can’t be scared off by someone once you’ve seen them laugh that hard about bird poop.

Oxford is a very social place among both students and teachers. I’m usually the sort to attend certain types of functions exclusively for the free food. I get in, I eat, I get out. But in my college dining hall (with each college having their own unique requirements and space and culture like the houses in Harry Potter), it seems you cannot remain antisocial. People will introduce themselves and inquire after your studies whether you want them to or not—eventually you learn to want them to.

I’ve also learned, speaking of excuses for free food, that if an invitation says that the event is a “Taster,” that does not connote a buffet or a potluck. It is in fact an interest meeting. I found this out the hard way when I showed up to the Christ’s Church College boathouse for what I thought was just a BBQ and was immediately approached by several very fit people in matching spandex that said, “so you’re interested in rowing with us?” I eyed the burgers and brats that were smoking with flavor and heat nearby and said, “Uh-huh.”

I love the town of Oxford. I love the architecture and the stonework and the crisp feeling of autumn weather (I left before it got to winter). I love the sweetshop on High Street where the man behind the counter gives me free gummies sometimes. I love the river running through everything with its bridges and punting boats and its fisherman that know that they won’t catch anything great, but just enjoy being there. I needed to go to a computer repair shop and Google Maps took me on a 3-mile walk with views like these:

Even as I strike out into this new phase and this fresh pursuit, I remain aware of the identity that I carry distinctly about my person as I go. We break for teatime twice a day. A professor will stop practically mid-sentence when it’s time for tea. We all retire for biscuits and conversation amidst a rhythm of spoons clanking against cups and saucers. This is as much a part of the education as the class time, so I’m told. I am conspicuously empty handed during these times. They have herbal teas on hand, but as a classmate of mine said, “the smell of herbal tea writes a check that the taste just does not cash.”

I am noticeably a Mormon wherever I go. It is a sensation I grew very familiar with growing up where I did, but had forgotten about in my six-year sojourn in Utah. As it turns out, my American-ness is evidently obvious as well.

I thought being in Oxford would make me want to be more British (though I will fight not to adopt a strange pseudo-accent that sounds like I’m feigning sophistication), but the more I’m around the propriety and reserve of the British, the more I want to scream out and laugh loudly and be extremely forthcoming about very vulnerable things because I know they won’t be. My first go at being educated in Britain is making me more American.

It seems I am incurably American and untreatably Mormon. We’ll see what happens next.

Mariah, Enjoy your time. I attended the other elite university over there for three years. Oxford and Cambridge people do not mention "the other" university out of rivelry. Studying and living there is so very different. Hope you connect with other LDS to help keep your balance. I experienced a great deal of anti-Mormonism even in my department. Mostly ignorance.... from some of the most well read scholars in the world who won't even bother to learn the basic acts about Mormonism. Just focus on your education and learn all those social graces like which fork or spoon is used for which dinner course. Yes, you may return with an accent and have Americans ask where you come from. LOL All the best.

I loved this article and taste of the British culture I grew to love during a brief 2-month visit. I'm also a bit jealous of your experience! :)