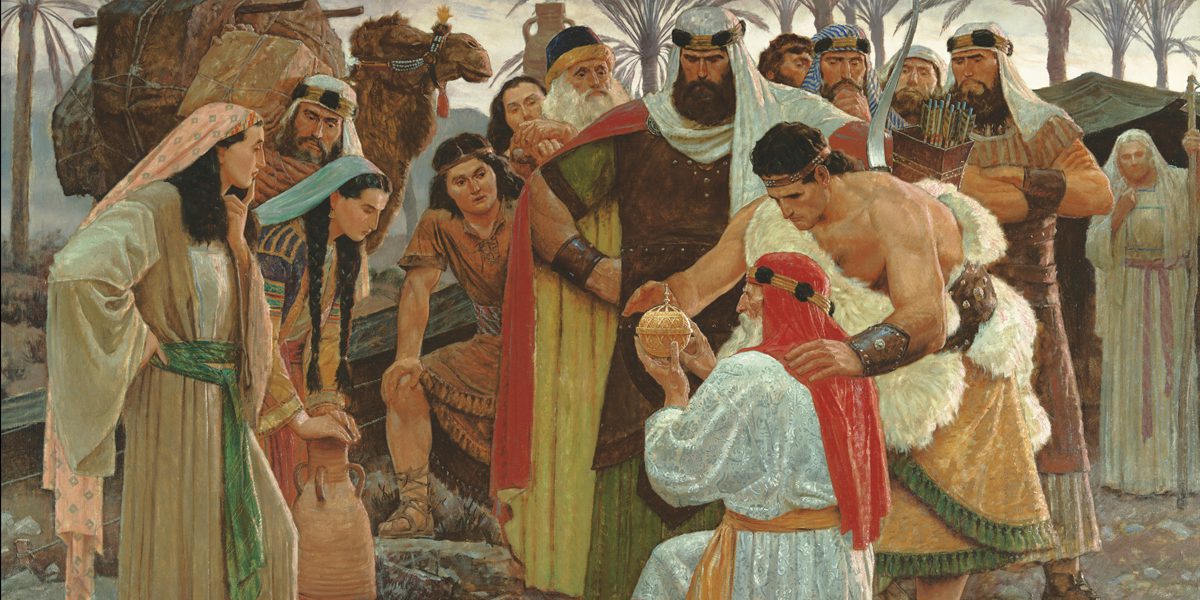 “I, Nephi, being exceedingly young … and also having great desires to know of the mysteries of God, wherefore, I did cry unto the Lord; and behold he did visit me.”
1 Nephi 2:16

The LDS Doctrinal Mastery resource offers a clear framework to help all people learn and apply divine principles for acquiring spiritual knowledge. The principles behind this process are themselves revealed principles. They include “acting in faith, examining concepts and questions with an eternal perspective, and seeking further understanding through divinely appointed sources.”[1]

No better companion can be found for understanding the process of acquiring spiritual knowledge than the Book of Mormon, Another Testament of Jesus Christ. Numerous prophetic promises, wise statements, and inspiring stories on almost every page of this revealed book mark the path and model the way that leads to spiritual growth through the Lord Jesus Christ. The first principle that stands out in this sacred record is that of “acting in faith.”

The process of sincerely asking for and willingly receiving spiritual knowledge plays out in numerous Book of Mormon narratives and is the subject of several doctrinal discourses. These narratives often contrast those who righteously sought and successfully obtained spiritual guidance with individuals who relied primarily on their own wisdom and understanding. Other stories show how individuals were transformed from hardened skeptics into righteous seekers of truth.[2]

Nephi, for instance, discovered when he was still “exceedingly young” that the Lord would personally communicate with him (1 Nephi 2:6). In contrast to Laman and Lemuel’s murmurings, Nephi “did cry unto the Lord” because he had “great desires to know of the mysteries of God” (v. 16). In response to his asking in faith, Nephi said that the Lord “did visit me, and did soften my heart that I did believe all the words which had been spoken by my father” (v. 16). Importantly, Nephi’s early inclination to turn to the Lord for confirmation of sacred truths helped him to “not rebel against [his father] like unto [his] brothers” (v. 16).

A similar contrast can be seen between Alma and Amulek and their opponent Zeezrom, who was a lawyer trained “in all the arts and cunning of the people” (Alma 10:15).[3] Zeezrom tried to “question Amulek” in order to “make him cross his words, or contradict the words which he should speak” (V. 16). Yet even with all the learning and training of his people, Zeezrom was confounded by prophets of God, who miraculously “knew the thoughts and intents of his heart” (Alma 12:7).

Recognizing the futility of his human wisdom and learning, Zeezrom eventually began to soften his heart and, like Nephi, “inquire … diligently, that he might know more concerning the kingdom of God” (Alma 12:8). Seeing this miraculous transformation, Alma explained if a man will not harden his heart, he will be “given the greater portion of the word, until it is given unto him to know the mysteries of God until he know them in full” (v. 10).

This principle is well illustrated in the example of Lamoni’s father, who, like Zeezrom, started out contending against a prophetic messenger. He even tried to slay Ammon because of his prejudice against the Nephites (see Alma 20:10–20). But after discovering “the great love [Ammon] had for his son Lamoni” (v. 26), he was “desirous to learn” the spiritual truths that Ammon had taught his son (v. 27).

In this humble condition and with a believing heart (see Alma 22:11), Lamoni’s father asked Aaron what he could do to “have this eternal life of which thou hast spoken” (v. 15). So intent was his pleading for truth that he said he would “give up all that I possess, yea, I will forsake my kingdom, that I may receive this great joy” (v. 15).[4] Because of his great desire, his willingness to sacrifice, and his sincere humility, Lamoni’s father was able to pray in faith and, like Lamoni himself, receive a miraculous confirmation of spiritual truths.[5]

These and other Book of Mormon stories aptly demonstrate the foundational principles for receiving revelation.[6] Not only does the Lord require that inquirers ask, seek, and knock (3 Nephi 14:7), but they must sincerely ask in faith, willingly seek in humility, and genuinely knock with real intent.[7] Only in this condition—with a softened heart—can revelation flow into the minds and hearts of those who seek it.

These precious accounts in the Book of Mormon reveal how the process of acquiring spiritual knowledge works. They demonstrate how crucial it is to not become hardened or skeptical toward revelation. Those who never soften their hearts in the first place won’t obtain the foundational testimony needed to guide them to eternal life.[8] And those who, after receiving a testimony, begin to treat the process of acquiring spiritual truths flippantly or without faith may soon discover that “the gospel isn’t working so well” for them.[9]

The reality of this truth is symbolized in many places in the Book of Mormon, as in the story of the Liahona. This miraculous device was given to Lehi and his family to help them journey through the wilderness and cross the ocean toward the promised land. Like the Holy Ghost, the Liahona’s main purpose was to simply “point the way they should go” (Alma 37:40). It didn’t tell them everything about what was ahead or how their journey would proceed, but instead prompted them to act on faith with only a limited amount of information.

Yet, as Alma reported, because that miracle took place “by small means,” members of Lehi’s family sometimes became “slothful, and forgot to exercise their faith and diligence” (Alma 37:41). When this happened, the Liahona’s “marvelous works ceased,” the party “did not progress in their journey,” and they “were afflicted with hunger and thirst, because of their transgressions” (vv. 41–42).[10] These hardships demonstrate the negative effects of forgetting or disregarding the revelatory power of the Holy Ghost.

The good news of the gospel is that as often as followers of Christ continue to keep their covenants and act on faith, they will receive consistent spiritual direction. From time to time, this direction will take the form of more direct and clear revelation, such as the words written on the pointers of the Liahona (1 Nephi 16:29). Most frequently, however, this guidance will come through subtle promptings and impressions, more analogous to the Liahona’s pointers which directed Lehi’s party “day by day” as long as they were faithful (Alma 37:40).[11]

Whether guided by miraculous revelation or by subtle inspiration, Elder Richard G. Scott testified that by following the “currents of divine influence … you will always know what to do.”[12] As individuals faithfully and obediently seek for spiritual guidance and direction, the Holy Ghost, and the Book of Mormon itself, can act as a personal Liahona to guide them step by step, line upon line, in keeping their own lives along the path that leads to eternal life and happiness.[13]

Elder Richard G. Scott, “How to Obtain Revelation and Inspiration for Your Personal Life,” Ensign, May 2012, 45–47, online at lds.org.

[8] Alma described this potentiality when giving his famous sermon on faith. He explained that the seed (the word of God) would only begin to grow within the heart “if ye do not cast it out by your unbelief, that ye will resist the Spirit of the Lord” (Alma 32:28). Jesus also warned of this possibility in the parable of the sower (see Matthew 13:19).

[10] See Joseph Fielding McConkie and Robert L. Millet, Doctrinal Commentary on the Book of Mormon, 4 vols. (Salt Lake City, UT: Bookcraft, 1991), 3:282: “Thus the Liahona was a symbol of their faithfulness, a visible evidence of their standing before God.” Likewise, the companionship of the Holy Ghost—or the lack thereof—can be a meaningful indication of one’s standing before the Lord.

[11] For an explanation of how the Holy Ghost usually guides through the still small voice (promptings and impressions), see Elder Dallin H. Oaks, “In His Own Time, In His Own Way,” Ensign, August 2013, 24–25, online at lds.org. Concerning the distinction between revelation and inspiration, see Elder Richard G. Scott, “How to Obtain Revelation and Inspiration for Your Personal Life,” Ensign, May 2012, 45, online at lds.org: “The Holy Ghost communicates important information that we need to guide us in our mortal journey. When it is crisp and clear and essential, it warrants the title of revelation. When it is a series of promptings we often have to guide us step by step to a worthy objective, for the purpose of this message, it is inspiration.”

[13] See Neal Elwood Lambert, “Liahona,” in Book of Mormon Reference Companion, ed. Dennis L. Largey (Salt Lake City, UT: Deseret Book, 2003), 520: “For the faithful, the Book of Mormon itself is a type of Liahona for it contains ‘the word of Christ, which will point to you a straight course to eternal bliss.’”