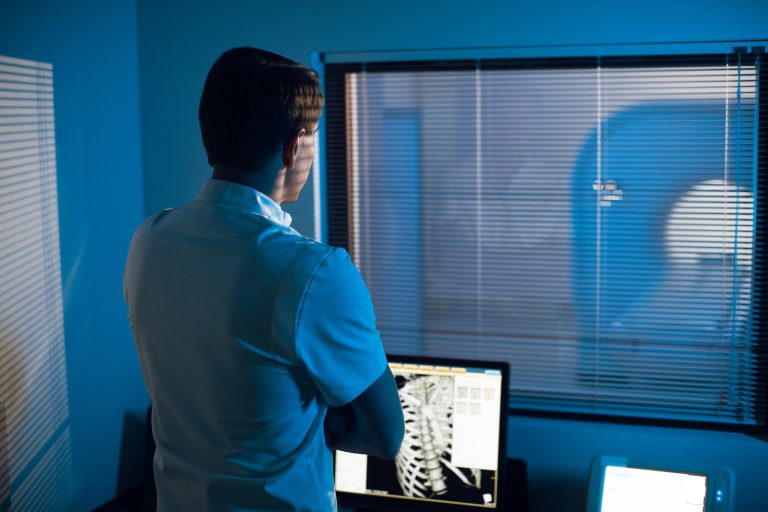 I was having trouble with my shoulder this summer. The pain increased during the two times I helped my son move, but I thought that after we finished, it would ease up. The pain did taper off, but it was still almost unbearable. I finally decided I had to have it checked.

The doctor moved my arm through a lot of different rotations. He said he was sure there were torn ligaments. He wanted me to get an MRI to make sure, so I set an early morning appointment with the imaging lab so I could get it over with and get on with my day.

On the appointed morning, I arrived at eight and filled out the paperwork. It wasn’t long after I turned it in that I was called back.

“Do you have any problems with claustrophobia?” the technician asked.

“This will only take about eighteen minutes,” he said. “You will have headphones on, partly because the machine is loud, and partly so we can play music. Music usually helps calm a person.”

The technician examined my shoulder. “Do you have any metal in your arm?”

“You have some interesting scarring on your shoulder. If you were to have any metal in it, the metal could heat up in the machine.”

I climbed onto the table. The technician wrapped a cap-shaped item around my shoulder and handed me a remote with a button on it. He told me to press it if there was any problem.

I laid back and closed my eyes, and the bed moved me into the machine. He turned on the music, and the sound and vibration started. But it had been on less than a minute when it all shut down.

He came on over the headphones. “You have a bullet in your arm.”

“How can I have a bullet in my arm and not know it?” I asked.

He laughed. “Shouldn’t I be the one asking you that question?”

He hit the buttons to have the bed move me back out, and he talked to me.

“Were you in the military and possibly picked up some shrapnel?” When I told him I wasn’t, he said, “I suppose it could be picking up something on your shirt.”

He had me take my shirt off and roll the sleeve on my undershirt up beyond my shoulder. He again put the cap piece over my arm, and I climbed back on the table. Once I was back in place, he started the machine up again. Once more, the MRI machine was on less than a minute before he shut it down. He spoke over the speaker.

“There is definitely a bullet in your shoulder. It will probably get warm and maybe even really hot. I can try to work around it and still do the MRI, but it has to be your choice.”

“All right, but if it starts to get too hot, hit the button.”

He started the machine up again, and the spot he indicated had the bullet did get hot, but not unbearably so. It also felt like tiny pins were poking me all around that spot. By the time the test was done, that part of my shoulder was tingling enough to nearly drive me crazy.

After I put my shirt back on, I asked if he would show me the bullet on the MRI.

He brought up the image, and I asked, “Do you think that’s what is causing my problem?”

“I’m a technician, not a doctor,” he said. “I’m not allowed to even guess. But I do have a question. Surely you have some idea where it came from, don’t you?”

“Oh, I have some ideas,” I replied, “but the strange thing is there are too many possibilities to be sure.”

When I walked out of there, all I could think about was how strange it was to be told you have a bullet in your arm and not know for sure where it came from.

To be continued? Seriously?