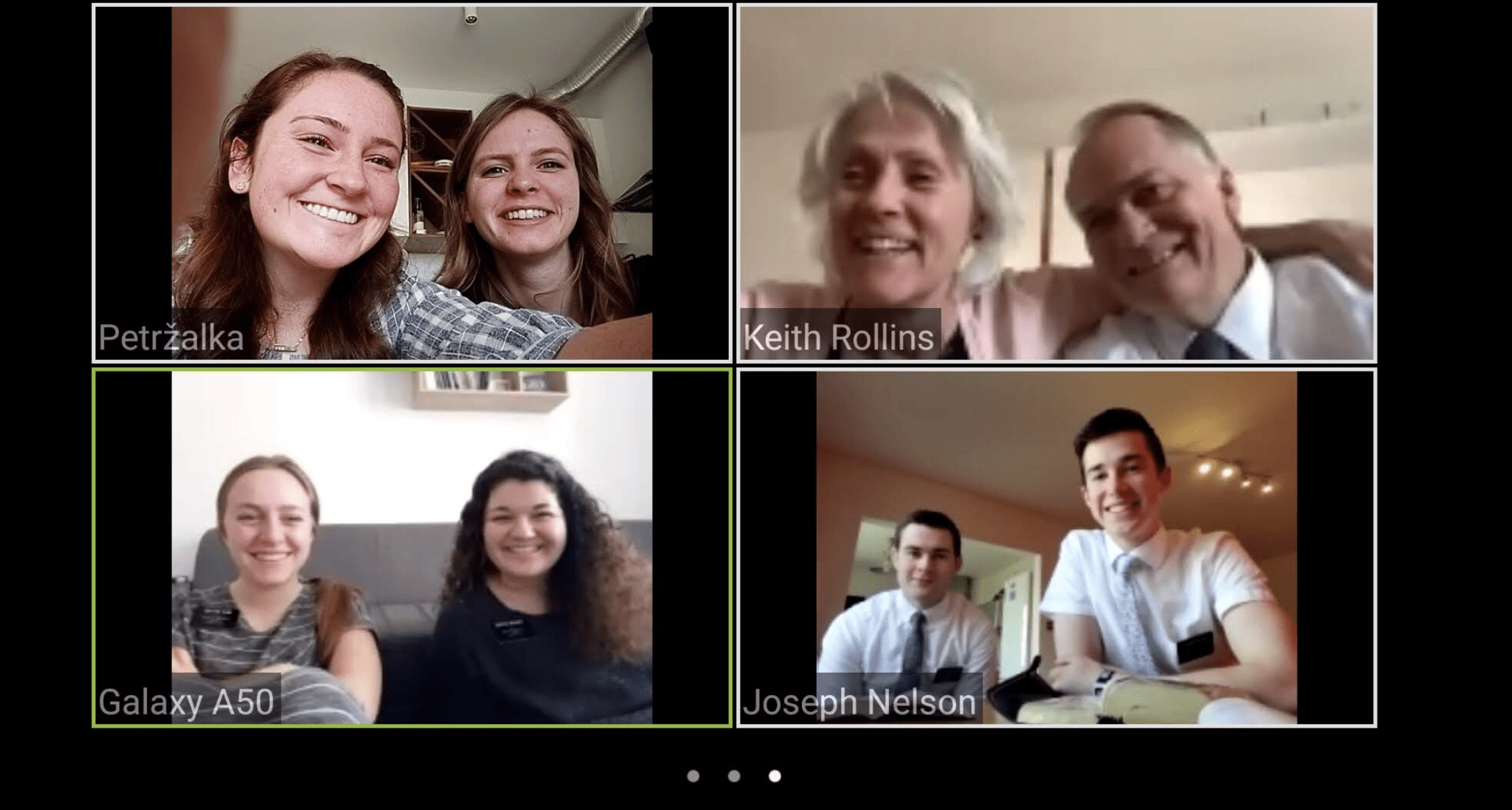 COVID-19 precautions began with the government asking the mission president to stop all missionary contacting on public transportation so as not to ruin the Church’s reputation in the country. Public transportation contacting had been the main way they had found anyone to teach. So, when word came to the already dejected missionaries that they were going into quarantine for COVID-19, they felt like the Czech Slovak Mission was going to have even fewer baptisms and less success than they had grown accustomed to in their long months knocking doors, street contacting, and teaching English.

Each day in quarantine began just as any standard day would as a missionary. The sisters woke up at 6:30am, exercised for 30 minutes, showered and put their proselyting clothes on, and studied for three hours—an hour for personal study, an hour for companion study, and an hour for language study. When studies were done, instead of leaving their apartment, they would sit down and commit hours to searching Facebook and talking to the 15-20 members in the branch about who they could teach the gospel.

Yet, during their daily morning Zoom calls as a mission led by their mission president, Camille and her companion began to hear miracles and success stories from other companionships in the mission. “We could better study, we could better find people on Facebook, we could better reach out to members, people were on their phones, people had more time because they weren’t working, so people were very receptive to our message because it was a trying and stressful time and nothing was really helping their stress and anxiety,” Camille said.

What seemed like a dismal sentence to wait out her last transfer of her mission locked in an apartment, broken up only by short jaunts of fresh air, brought to Camille one of the greatest miracles of her entire 18 months.

The week before quarantine went into effect, Camille and her companion were prayerfully searching a Facebook page for foreigners in the Bratislava community. One particular post caught their eyes—a man named Andy, who was new to the area from Ukraine, asking if anyone had a ping pong table he could use.

Without the influence of the Spirit, the two sisters may have thought, “This isn’t a missionary opportunity,” or, “Other missionaries will think we are goofing off if we take our time to go play ping pong,” but the sisters, thinking of the unused ping pong table at their church building, replied to his post and invited him to meet them at the church for ping pong.

Camille was nervous walking into the church building the day her companion and two other sisters met Andy for the first time. They weren’t even good at ping pong! What would he think? Could they come up with some clever gospel analogy to relate to ping pong to bring it around? But when Andy arrived with a couple of other friends, the sisters were surprised at how easily gospel conversations came up as they attempted to hit the ball back and forth. “Where are you from?” Andy asked. “What were these four American girls doing in Slovakia? What was this church that they were playing ping pong in? How did they learn Slovak so quickly?”

Andy told them he had come to Slovakia for a job he was trying out, and if it was a good fit would bring his wife and children over from Ukraine where they had remained. Andy had taught English for years, so his English and Russian were perfect, but he needed help learning Slovak. The sisters were accustomed to teaching English and Slovak classes, since people rarely wanted to hear gospel messages up front on the street, so they offered Andy the deal they give everyone seeking to learn a language from them—they would teach him 30 minutes of Slovak for a 30 minutes gospel message. He readily agreed, and they made an appointment for that week.

The day after their hour of ping pong, quarantine officially went into effect. Yet, even through the video call, Andy was amazed at their first, simple gospel message. The sisters testified to him that God was his loving Heavenly Father and that the gospel blesses families. “Why would God care about me?” Andy asked sincerely. “I am just some guy from Ukraine. I’ve made a lot of mistakes. Why would he love me after all my mistakes?”

As the 30-minute gospel time came to a close, the sisters taught Andy, who had claimed to not believe in God (but maybe a higher energy or power) before the lesson, how to pray to his Father in Heaven. He had prayed as a young kid but hadn’t prayed for years, and he felt uncomfortable praying in front of the sisters. Andy left the lesson with a challenge to try praying on his own.

The next “30-30” lesson, Andy asked if the “spiritual stuff” could be the first thing they did and had so many questions. Each subsequent lesson became more like a “50-10” lesson, only spending the last few minutes of the hour going over Slovak. The ping pong table stood forgotten altogether. “Sorry we didn’t get to much Slovak today,” Andy would say. “No worries at all!” the sisters would exclaim.

Andy’s lessons not only became one of the only steady appointment in Camille’s planner, but the more the sisters met with Andy, the more they saw he wasn’t just another guy needing Slovak lessons. He was beginning to gain a testimony for himself of the truthfulness of the gospel of Jesus Christ—a true 180-degree transformation from his belief system just weeks before.

By the time General Conference came, Camille and her companion had taught Andy about the apostasy, restoration and the fact that we have modern-day prophets and apostles on the earth. Andy was so excited about this that he watched every session of conference, texting the sisters questions about the hosanna shout and patriarchal blessings and soaking it all in. So many of his questions were answered, and Andy felt the that the prophet and apostles were truly called of God.

The respite of conference came at the perfect time because Andy’s roommate had just tested positive for COVID-19 and Andy was on a mandatory lock down in his room for 14 days. He couldn’t even leave his room to go to the kitchen.

“We could tell that he was discouraged because he felt very alone,” Camille said, “That was another reason why he was open to prayer. He didn’t have any friends there, his family was far away, he barely knew us missionaries, but we had taught him to pray. He decided to give prayer a shot to see if Heavenly Father would answer or reach out to him in his time of need.”

After the 14 days, Andy’s roommate was tested for COVID-19 again and was still positive, forcing Andy into another 14 days of loneliness. He was discouraged and didn’t even know anyone to help him. The sisters offered to get him groceries or to bring him a physical copy of the Book of Mormon in Russian, but he wouldn’t allow the sisters to take public transportation groceries because it would put them at risk.

The sisters decided to reach out to an American expat family in their branch to see if they could help. The father of the family, Greg, had served his mission in Ukraine and spoke Russian. Once Andy and Greg connected, they were fast friends, and Greg helped get Andy what he needed, including a special request from Andy—a Russian Book of Mormon. His prayers had been answered.

Through all of this, Andy hadn’t said a word about the missionaries and all that he had been learning to his wife in fear that she would disapprove of his sudden religious awakening. But as Andy prayed about it, he felt like he couldn’t keep secrets from his wife any longer.

“Heavenly Father was not limited with His blessings and His miracles, even though the entire world was limited. The corona virus did not stop the work,” Camille said.

Thank you for sharing this heartwarming story.

Yes! He is helping us! We just need to trust Him and keep our sacrament covenants. ...Jesus says: "Look unto me in every thought; doubt not, fear not." And "See the nail prints in my hands and feet." ...Touch me and feel. And: I do not condemn you, go thy way and sun no more. (All in D&C, section 6).