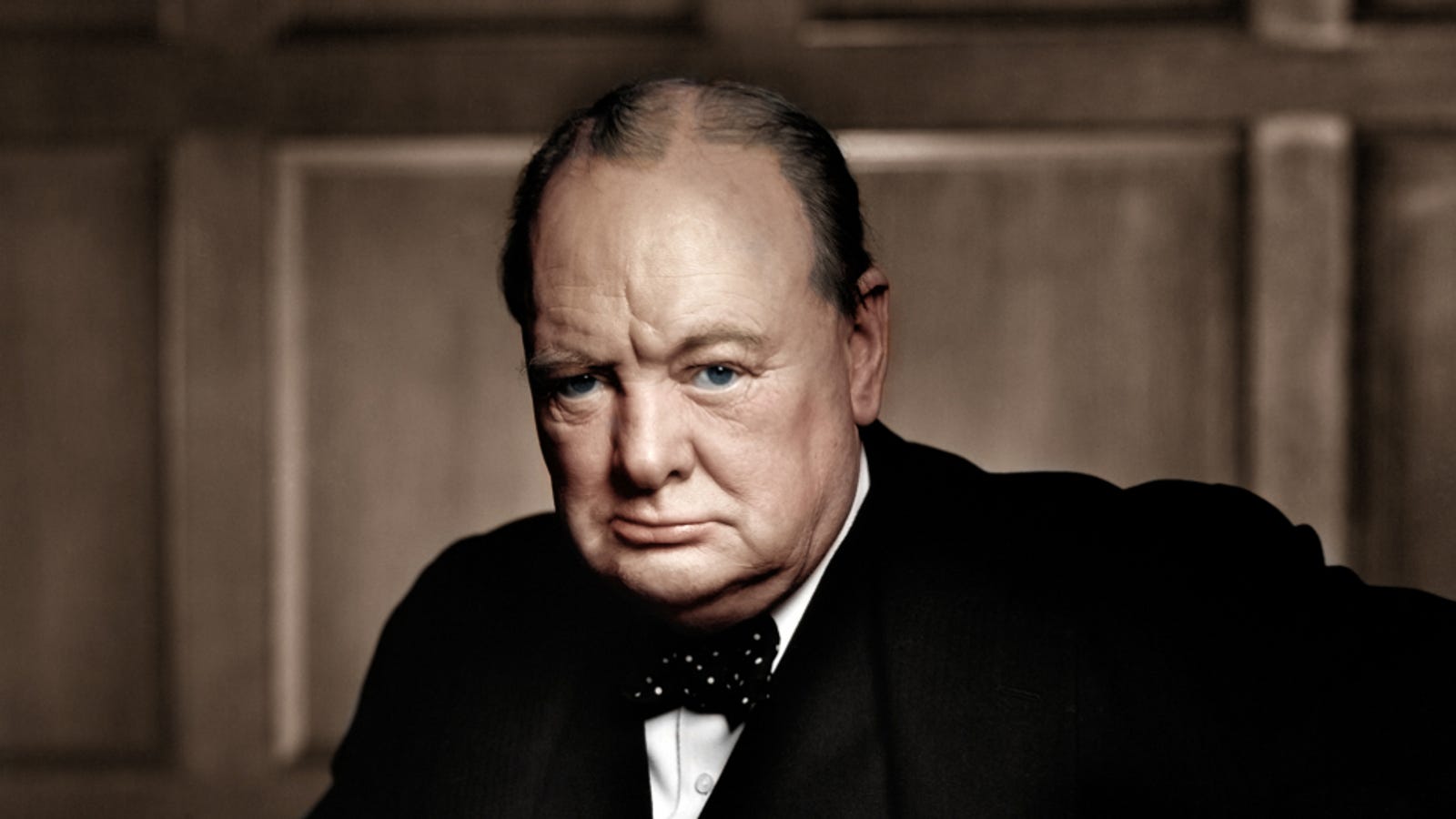 Born to a wealthy, aristocratic family, he was short in stature, with rather delicate white hands and unathletic limbs.  Seated at the back of the classroom and overshadowed by the accomplishments of the other students, he was tormented and tyrannized in school.  Still, although he was terrified of public speaking, he was eventually elected to Parliament.  But his fear didn’t simply go away upon election.  Once when he stood up to address the House of Commons, his mind went completely blank.  Except for a few friends who called out encouragement to him, his colleagues remained respectfully silent—surely something of a rare event in the often raucous House.  But he returned to his seat having said nothing, and buried his face in his hands.  Ambitious and energetic nonetheless, he was appointed First Lord of the Admiralty during the First World War, overseeing the daring Gallipoli Campaign.  It was a disaster, and he was both shocked and disgraced.

The period from mid-1929 to the beginning of the Second World War in late 1939 is generally described as his “wilderness years.”  Although still a member of Parliament, he held no cabinet office in the government itself, and, as he aged from his mid-fifties to his mid-sixties, he saw time passing him by.  To make things worse, he had suffered for years from bouts of deep depression that had probably been passed down genetically within his family.  “The black dog,” he called it.  And now he had real reason to fear that his career was over.  He had felt destined to do great things, but his ambition had remained unfulfilled.

Then his country called upon him, in what many have called its darkest hour.  Great Britain was at war, and it was losing.  Much of its army was trapped, facing either capture or destruction, on the far northern coast of France.  Prominent voices in the government argued for surrender.

But he did not surrender.  And, at his death, despite numerous well-known and generally recognized personal flaws, Sir Winston Churchill was widely hailed as the greatest prime minister in the history of England.  Indeed, more than a few consider him altogether the greatest Englishman in history.  He was fully sixty-five years old when he assumed the role that made him great—or, perhaps more accurately, the role that revealed his greatness.

An old French or English proverb has it that “no man is a hero to his valet.” What does this mean?  It seems to mean, simply, that supposedly great personages tend to seem pretty ordinary and entirely human from a servant’s perspective.  Servants see the great personage eating, sleeping, complaining, losing patience, engaging in common daily activities, not grand historic deeds. Thus, it’s striking to read that even his personal physician, Lord Moran (Sir Charles Wilson), saw Winston Churchill as a genuinely great man and a hero.  But Churchill didn’t become great without effort.

For example, Lord Moran wrote in his memoir, which was published after Churchill’s death, that few people have worked with such dedication (“almost religious”) on the craft of using words.  Churchill used that carefully cultivated craft of writing and speaking to make his political fortune in peacetime; in wartime, his eloquence won everybody’s heart—and, in 1953, won him the Nobel Prize for Literature.

Lord Moran was astonished at Churchill’s willpower and at his dedication to reaching his goals.  Although not innately blessed with physical size or strength or agility, for example, he was determined to make himself robust and hardy, and, in wartime, he deliberately exposed himself to danger.  In France during the First World War, he rode a white horse on the front lines because he wanted to test (and to strengthen) his nerve.  (It’s hard not to think, in this regard, of the young Theodore Roosevelt, who overcame similar handicaps in a similar way.)  And Churchill worked hard at learning not only to cope with the humiliations and injustices of his life but to overcome them.

At one point, Churchill gave Lord Moran some practical advice based on his own experience:  He said that it helped him, when he was feeling somewhat overwhelmed, to write down a half dozen things that troubled him.  Of the six, he counseled, two were likely to solve themselves.  Another two couldn’t be changed, so there was no point in worry oneself over them.  But two of them probably could be addressed and managed.  And it was on that kind of challenge, he suggested, that one’s energy should be focused.

Stories like Winston Churchill’s should encourage all of us who have encountered loss and failure and who may even feel that time has passed us by.

Abraham Lincoln could have served as another example:  According to a standard list of his failures, he lost his job and was defeated for the state legislature in 1832, though he would win election two years later.  He failed in business in 1833, his sweetheart died in 1835, and he suffered a nervous breakdown in 1836.  He was defeated for speaker of the state legislature in 1838 and as a candidate for Congress in 1843.  He was elected to Congress in 1846 but failed even to be renominated in 1848.  In 1849, he was rejected for appointment as a land officer, in 1854 he was defeated in a bid for the United States Senate, in 1856 he failed to gain nomination for the Vice Presidency, and, in 1858, he was again defeated for the United States Senate.  But he was elected President of the United States in 1860, when his nation faced the worst crisis of its history until even now.  He rose to the challenge, and many consider him the greatest of all American presidents.  At his death in 1865, Secretary of War Edwin Stanton, who had begun as a sharp critic of Lincoln, famously declared “Now he belongs to the ages.”

How are such accounts relevant to New Year’s Day?  That’s simple.  They are about second chances in life, second chances in which, after multiple failures and embarrassments, Lincoln and Churchill performed brilliantly.  They tell us, or should tell us, that no matter where we are, we can be and do better.  No matter how discouraged we may be, we can have a second act.

As it happens—and this is no mere coincidence—Christianity too is very much about new beginnings.  It’s about being washed clean. “Though your sins be as scarlet,” said the Lord through the prophet Isaiah (1:18), “they shall be as white as snow; though they be red like crimson, they shall be as wool.”  It’s about resurrection to new life.  And that resurrection to new life is represented in the symbolic death and rebirth of baptism by immersion, by which repentant converts and others are “born again.”

We renew our covenants by partaking of the sacrament weekly. Those who are “faithful” in the priesthood and who “magnify their calling” are “sanctified by the Spirit unto the renewing of their bodies” (Doctrine and Covenants 84:33).  “And now behold,” said the Book of Mormon prophet Alma, “I ask of you, my brethren of the church, have ye spiritually been born of God? Have ye received his image in your countenances? Have ye experienced this mighty change in your hearts?” (Alma 5:14).  And all “they that wait upon the Lord shall renew their strength; they shall mount up with wings as eagles; they shall run, and not be weary; and they shall walk, and not faint” (Isaiah 40:31).
“Behold,” the Lord testified to John the Revelator, “I make all things new” (Revelation 21:5).  And, in fact, John saw a “new Jerusalem” and even “a new heaven and a new earth” (Revelation 3:12; 21:1-2).

In stark contrast to Christmas, New Year’s Day is usually a very secular celebration.  But perhaps it shouldn’t be.  There’s nothing wrong with football, of course—in fact, for perhaps the first time in my life, I’m going to utter the phrase “Go Utes!”—but the New Year is about new beginnings, and so, too, is the Gospel of Jesus Christ.
There is perhaps no worse way to ring in a New Year than, having eaten too much, to wake up late after little sleep—and, in all too many cases, with a bad hangover.  Our culture’s ways of observing the holiday can sometimes be remarkably perverse.  In New Year’s resolutions, though, there is something that is not far removed from Christianity and even, if I dare say so, from the Latter-day Saint notion of eternal progression.

The beginning of the new year has long been a time of setting goals, and of making resolutions to change our behavior, of trying, in other words, to take another shot at a target, to remake ourselves.  The ancient Romans began each year by making promises to the god Janus, whose name survives in our month of January.  Medieval knights, it is said, renewed their vows of chivalry annually, at the conclusion of the Christmas season.  Jews are encouraged to reflect upon their sins and errors, and to repent of them, during the period extending from Rosh Hashanah, the Jewish New Year, through the High Holidays that culminate in the Day of Atonement, Yom Kippur.  (During this past year, those holidays all fell in September.). Some Christian denominations still celebrate “covenant renewal services” on New Year’s Eve or, alternatively, on New Year’s Day.

The beginning of a new year is an excellent time to decide to pay more attention to our families, to resolve to lengthen our stride, to be a little kinder, a bit more prayerful, more charitable, more aware of the needs of others, more dedicated to the Kingdom of God.  To be better than we were last year.

Some studies indicate that we are more likely to formulate New Year’s resolutions now than we did several generations ago.  And, despite our all-too-familiar tendency to break our resolutions, there is actual evidence to suggest that those who set goals for themselves in the new year—e.g., to quit smoking, to read the scriptures daily, to lose weight, to reduce our consumption of sugar, to establish a program of regular exercise—are more than ten times more likely to keep those resolutions than those who make similar vows at other times during the year.
So perhaps, amid the partying, we should take the New Year holiday a little bit more seriously.  In the words of the British Victorian poet Alfred Lord Tennyson,

Enjoyed your article. How coincidental for I just finished reading "Leadership in War from Lincoln to Churchill" by Correlli Barnett, and have just started reading a comparative biography of "Lincoln & Churchill" by Lewis E. Lehrman. My office/study has apart from pictures of my family, the Saviour, Joseph Smith, and Pres. Nelson, my only other pictures are of Lincoln, Churchill, and Don Bradman. All studies in leadership. (ps I had lunch with Don Bradman and he signed the photo, that's why he's there! Also, because he was the world's greatest cricketer).

Thanks for the inspiring article!