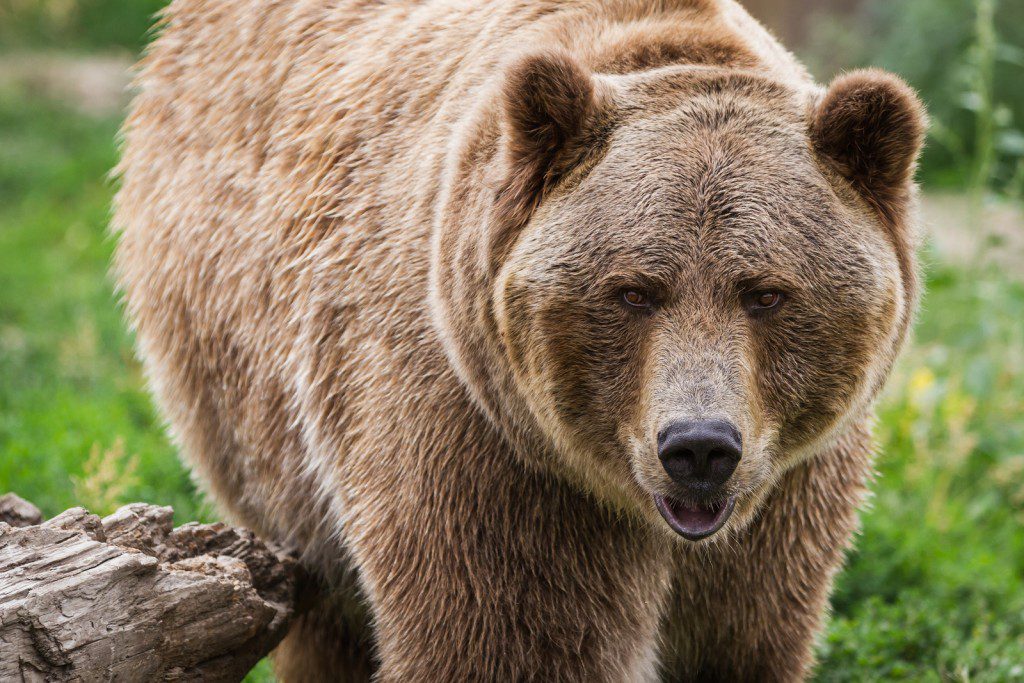 My university colleagues and I always tried to find summer work, and then returned to share stories of our adventures.  But John’s story was unsurpassed that year.

As he had in other years, John found work in Yellowstone National Park doing trail maintenance.  He would walk the trails of the park with a chain saw, cutting trees that had fallen across the paths.  Also, as in previous years, because he would be working in the back woods, he had to sit through bear safety training even though he could nearly repeat it by heart.

Black bears seldom attack unless they think their cub is threatened.  The best defense against them is to run away.  It doesn’t do much good to climb a tree because black bears can climb trees and do it much faster than a human.

Grizzlies are much more prone to attack.  Grizzly cubs can climb trees, but grown grizzlies can’t, so if a grizzly charges, if possible, find a sturdy tree to climb.

For all bears, make plenty of noise so you don’t surprise them, and usually they will avoid human contact.  If a bear does attack and you can’t get away, roll into a ball to protect vital parts of your body and play dead.

He had just about tuned it all out when the head ranger said, “Be especially careful this year since we have had more grizzly sightings than in years past.”

The summer work started out normally.  There were a lot of trees downed by the heavy winter snows.  John would find the trees across the trail about every hundred yards.  He didn’t worry about making any additional noise, feeling the chainsaw made plenty.  But after a few weeks on the job, he had one of the scariest experiences of his life.  He came around a corner in the trail and there, about fifty yards from him, was a female grizzly.

He was surprised that she hadn’t left the area when she heard the chainsaw.  But when she turned and saw him, John knew he was in trouble and quickly sized up the surrounding trees.  He didn’t have long to consider options, because she charged almost immediately.  John ran to the best tree he could see.  He reached it and was able to pull himself up into it just before she ripped out a chunk of wood below his feet.  He climbed up until he knew he was safely out of her reach and sat down to wait until she left.

But that was where the bear training didn’t work.  The bear was supposed to prowl around the tree for a time and then leave.  But this bear started shredding the base of the tree.  John was grateful it was a strong tree, but he knew she would eventually topple it if she continued to rip it apart.  He couldn’t understand why she was so determined to get him.  That is, he couldn’t until he heard a cry from above him in the tree.  John looked up, and to his horror he saw a grizzly cub ten feet up.

As the mother continued to rip the tree apart, he considered his options, and he suddenly knew what he had to do if he was to have any chance of survival.  He climbed toward the cub, but the closer he came, the more the baby bear cried and the more viciously its mother attacked the tree.  The baby bear moved as far out on a limb as possible to get away from him.  Finally, as John felt the tree begin to shudder, weakened from the amount of wood ripped from its base, he moved within arm’s length of the cub.

Holding tight to avoid falling, John reached his foot out and shoved the baby bear.  It swiped at him, and when it did, he gave it a hard kick.  It lost its hold and tumbled to the ground, landed on its fat backside, and bounced.  The mother grizzly immediately ran to it.  Then, to John’s relief, the mother and cub ran away and disappeared into the woods.

John stayed in the tree for some time to make sure all was safe and to slow his heart.  Eventually, he climbed down, and, still shaking, he turned toward the path leading to the ranger station.  When he reached it, he heard a loud crash.  Thinking the mother bear had returned, he spun around.  What he saw really made him tremble.

The tree he had climbed had fallen.

I have been around bears my whole life and they are totally unpredictable. What one bear will do another won't think of. It was a miracle that tree stood and also that he was able to get the cub down that way. What a terrifying experience.