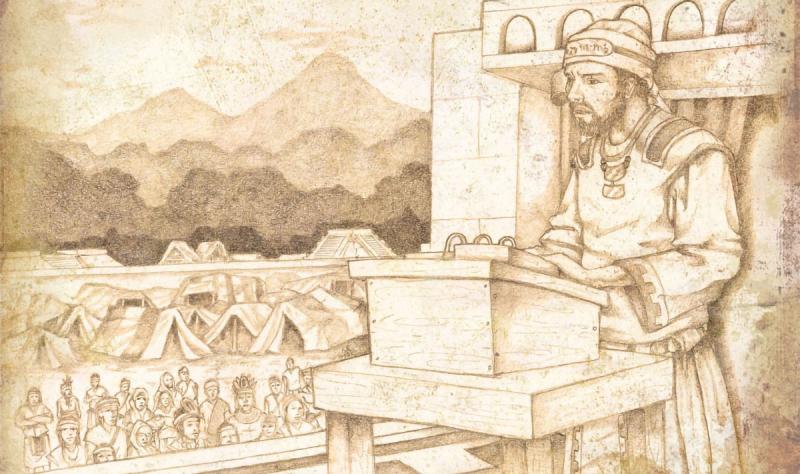 4 Gospel Truths We Can Learn from Jacob’s Speech

Reading 2 Nephi means encountering a lot of Isaiah, and Jacob’s speech is no exception. Jacob, as the newly installed high priest, gave a speech to the Nephites (2 Nephi 6–10) and quoted extensively from Isaiah 49–52. Jacob explained that Nephi specifically asked him to preach on these passages from Isaiah (2 Nephi 6:4), meaning that Nephi felt strongly that these specific chapters were important for the Nephites, and for us as readers, to understand and treasure. Through Isaiah’s prophecies, Jacob reveals many doctrinal and spiritual gems that can help all readers on their way to eternal life.

1. We need to renew our covenants regularly

Themes in Jacob’s speech, and the occasion of Nephi’s coronation, have led researchers to believe that Jacob might be giving this speech during the Feast of Tabernacles. Ancient Israelites would crown their new kings during this annual festival, and it was a time for Israel to review their covenants with the Lord at the temple. Jacob’s speech outlines an ancient pattern for covenant making which included conditions of the covenant, blessings for obedience, penalties for disobedience, and witnesses.

In his speech, Jacob reminded the Nephites that the blessings of the covenant are dependent upon obeying God’s laws. He uttered ten “woes” to remind the Nephites of the importance of obeying the ten commandments (2 Nephi 9:30–38). As part of the ancient covenant making pattern, Jacob not only gave woes, but also consequences for disobeying.

It makes sense that the Nephites would take time to renew their covenant with the Lord when they got to the Promised Land, since Joshua did the same thing with the Israelites when they made it to their promised land (Joshua 24). While the Israelites and the Nephites formally renewed their covenants annually at this festival, Latter-day Saints have the opportunity to renew our covenants each week during the administration of the Sacrament. The renewal of covenants is an important reminder to keep the commitments we made to God in exchange for his blessings and grace.

2. Jesus Christ is our High Priest

The Book of Mormon uses over 100 titles for Jesus Christ, but one Jacob uses often is “the holy one of Israel.” Jacob’s role as the new Nephite high priest may have given him a new appreciation for Jesus’ role as our high priest, the holy Anointed One. The holiness of the ancient temple increased as one progressed closer to the Holy of Holies, where the presence of the Lord dwelt, so calling Jesus Christ the “holy one of Israel” equates Him with the presence of the Lord in the Holy of Holies.

In Jacob’s speech, we also learn that an angel revealed the new title “Christ” to Jacob (2 Nephi 10:3). The angel may have revealed this sacred name because Jacob was pondering about what name to put on the headplate of the High Priest for the Day of Atonement. The headplate of the Israelite high priest possibly contained the name of the Lord, and the Day of Atonement was the one day during the year in which the high priest would utter that sacred name. The name “Christ” and “Messiah” both mean “Anointed One” and have strong connections to the temple.

Priests in ancient Israel were anointed and consecrated to their positions in the temple, much like Jesus Christ is the one anointed and foreordained to be the Savior of the world. Jesus Christ’s name is sacred, and His many titles can give insight into His many roles and characteristics. Honoring and reverencing the name of Jesus Christ is an important way that we can worship the great High Priest.

3 Jesus Christ is our Warrior and Defender

Jacob describes God as a Divine Warrior ready to fight for his people (2 Nephi 6:17). The perception of a violent God may not always make sense to readers today, since a kind, almost docile God is a common perception in modern Christianity. But the Nephites had been driven from their ancestral promised land of Jerusalem and perhaps worried that they were now cut off from the Lord’s covenantal promises in their new promised land. Jacob sought to reassure his people that the Lord had not forgotten them, by reminding them of the familiar Old Testament portrayal of a Divine Warrior God who had the power to intervene and fulfill His covenantal promises.

Today, the use of the Divine Warrior tradition in the scriptures can assure us that God will help us fight our battles and will come to our aid, particularly in overcoming the Adversary. The battle today may be more against sin and temptation, or doubt and distrust, but still, through Jacob’s powerful covenant speech, we can learn how to have faith that the promised Divine Warrior will help us fight and prevail over any and all challenges that face us.

4. The Book of Mormon is the best place to learn about the Plan of Salvation

The Old and New Testament both have much to teach about God’s covenants and love for His children. However, the Book of Mormon contains a greater fullness of the purposes of mortality, and what God intends for each of His children. Jacob is the first prophet to explicitly talk about “the plan of our God,” with reference to mortality, Atonement, and resurrection (2 Nephi 9:6, 13).

Lehi and Jacob both lay out in great clarity the reasons for the Fall, for earthly trials, for repentance, the Atonement, and the resurrection. Jacob teaches that our bodies are fundamental to the Plan of Salvation through the doctrine of the resurrection. Other groups may believe that the physical body is a distraction or hindrance to spiritual experience, but Jacob teaches that having a body is a manifestation of divinity (Jacob 9:7–10).

Read Book of Mormon Central’s KnoWhys and download the ScripturePlus app to get the most out of your Come, Follow Me scripture study.