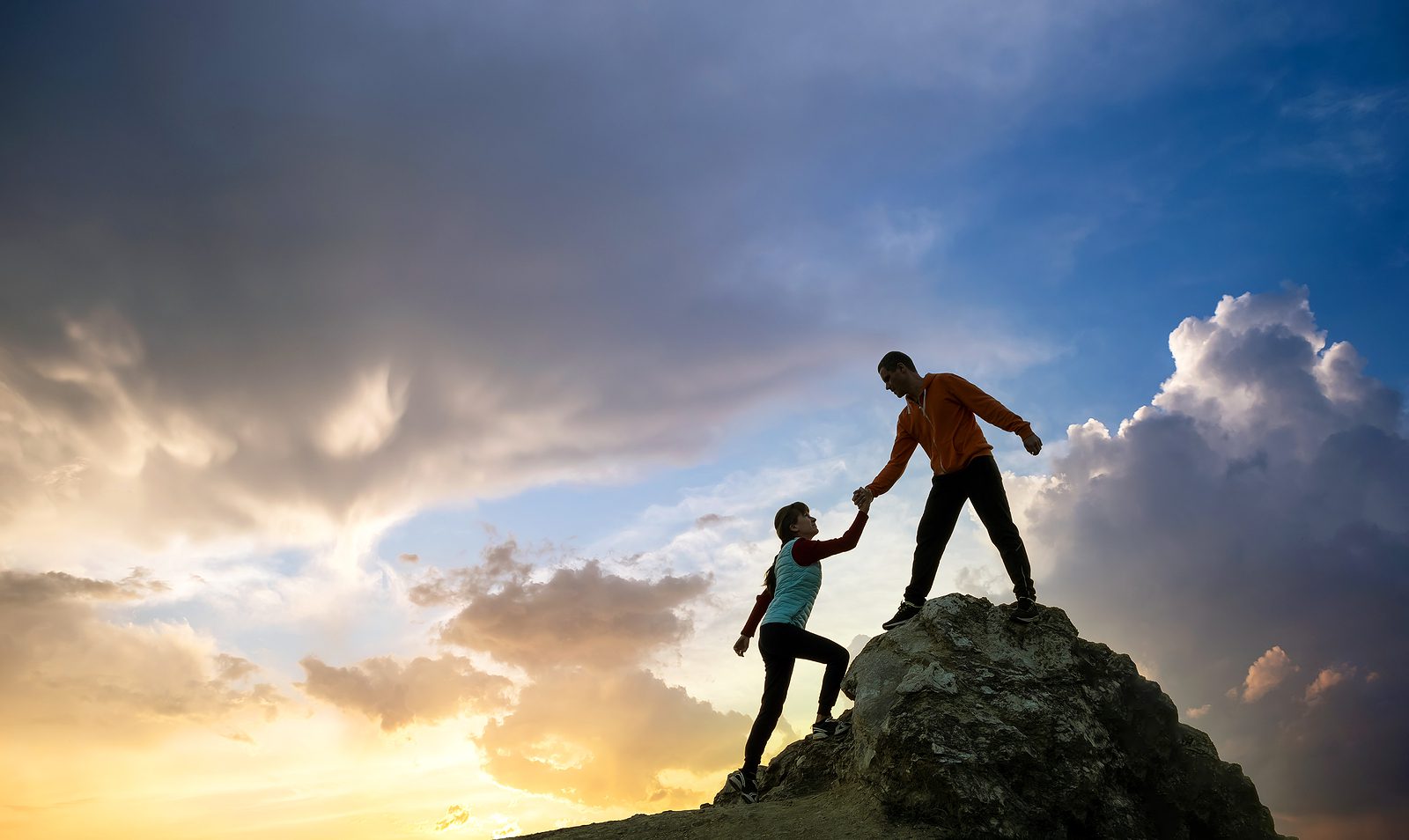 Fifteen or so years ago I was flying to Seattle. The pilot’s voice came on the intercom to update passengers to the fact that a strong tailwind made our arrival time in Seattle too early. He said he had permission, on that perfectly clear day, to take us on a tour of the four mountain peaks between where we were and Seattle. We flew around Mt. St. Helens, the shortest of the peaks at 8,365 feet, an active volcano that erupted on May 18, 1980. The summit was 9,677 feet before the eruption. Looking down on the horseshoe-shaped crater was awe-inspiring. In a few minutes we circled Mt. Baker at 10,781 feet, Mt. Adams at 12,276 feet, and then towering Mt. Rainier at 14,410 feet. We were close enough to see hikers, even the color of their backpacks. Richard and I were privileged some years ago to visit Zermatt, Switzerland to see the Matterhorn at 14,692 feet. Physical mountains, like life’s problems, come in different sizes.

Close to my home are Grandeur Peak at 8,299 feet and Mt. Olympus at 9,026 feet. Mountains, to me, are symbols of strength and beauty in which to drive, hike, camp, ski, picnic, and photograph. They are evidences of the Creator and the glories of creation. As I was listening to President Nelson discuss mountains moving, I thought: Why would anyone ever want to move a mountain?

We know from scripture that two prophets did move mountains: “The brother of Jared said unto the mountain Zerin, Remove—and it was removed” (Ether 12:30). And the enemies of Enoch’s people “came to battle against them; and he spake the word of the Lord, and the earth trembled, and the mountains fled, even according to his command” (Moses 7:13). I assume enemies were in hot pursuit of the Brother of Jared and his people as well, and like Moses parting the Red Sea, Enoch’s people and the Brother of Jared’s people were provided a divine rescue.

Another prophet, Nephi son of Helaman, received the sealing power and authority “to cast down [mountains], “smite the earth with famine, and with pestilence, and destruction, according to the wickedness of this people” (Helaman 10:6-9). Nephi used this sealing power, not as we would assume to unite families in holy temples, but to seal the heavens to rain. The headnote to Helaman 11 explains what happened: “Nephi persuades the Lord to replace their war with a famine—Many people perish—They repent, and Nephi importunes the Lord for rain.” I wonder if this has ever happened since.

President Nelson used mountains as symbols of life’s obstacles, such as “loneliness, doubt, illness, or other personal problems.” He said that even if “your personal challenges … loom as large as Mount Everest… with faith in Jesus Christ, your ability to move mountains can increase.” As he spoke, I felt his empathy. He didn’t minimize the height or location of my mountains or the suffering associated with climbing them. Neither did he back away from the counsel to develop Mount Everest-height faith.

During a recent trial, my husband asked me, “Do you have faith to be healed?” I said, “I don’t know. I think so.” Pondering the question for several days, I think if the Savior were passing by me on a crowded street in Galilee, I would instinctively reach out and touch the hem of His garment. But what I don’t know is how to reach out to Him today? What does that level of faith look like, feel like, and act like?

Faith is a vague word, perhaps more like wishful thinking, unless it includes Jesus Christ. The Fourth Article of Faith teaches that “faith” is not the first principle of the gospel; rather, the first principle of the gospel is “faith in the Lord Jesus Christ.” And, the definition of faith must also include works. “Thou hast faith, and I have works: “Shew me thy faith without thy works, and I will shew thee my faith by my works” (James 2:18). Faith is trying, doing, repenting, forgiving, working, praying, growing, becoming, serving, exploring options, responding to promptings, and keeping the commandments with one goal in mind—to become a better disciple of Jesus Christ.

I made a list of mountains in my life; the people and situations I want to fix when abruptly the thought came, “Most of the mountains on your list are not yours.”

I thought of Grandeur Peak, my mountain. What if someone moved my mountain? I really like it where it is. It would be very disruptive on many levels to look out and find it missing. When my friend and I were discussing President Nelson’s talk, I mentioned that I don’t want anyone moving Grandeur Peak, which is also her mountain. She said, “Oh my! I just realized that I have been trying to remove a mountain range that belongs to others.” It is an easy trap to want to remove someone else’s mountain or mountain range. If I infringe on your agency by trying to move your mountain, it’s a waste of time, energy, and a violation of freewill. And in my experience, the odds are 99.9% against it working anyway.

Oscar Hammerstein II who wrote “Climb Every Mountain” for The Sound of Music, suggests symbolic solutions to life’s problems:

Climb every mountain, ford every stream
Follow every rainbow, ‘til you find your dream.”

These poetic words encourage, uplift, and motivate when someone or something Gestapo-like is chasing you but not a principle to live by. There are far too many mountains to climb, streams to ford, and highways to follow. Everyone has to choose which mountains to climb, and just because a mountain exists, doesn’t mean you need to climb it. Maybe you figuratively just fly over or go around on your way to somewhere else like Seattle. And moving a mountain might simply be a very bad idea. Perhaps moving yourself takes greater faith.

One of my favorite children’s books is Ming Lo Moves the Mountain by Arnold Lobel. Ming Lo and his wife live at the bottom of a very large mountain. Their little stick home gets almost no sunshine. It rains almost every day. Rocks slide down the mountain onto their roof and damage their struggling garden. One day Ming Lo’s wife says: “Husband, you must move the mountain so that we may enjoy our house in peace.”

Tired and frustrated, Ming Lo goes back to the wise man who tells him to go home, take his house apart stick-by-stick, tie the sticks and their belongs together with rope, and carry them in their arms and on their heads. Then they are to face the mountain, close their eyes, and do the dance of the moving mountain, which is to put your right foot behind your left foot and then your left foot behind the right foot. “You must do this again and again for many hours,” said the wise man. Ming Lo and his wife disassemble their house, tie up all their belongs, and do the dance. The neighbors watch as Ming Lo and his wife walk backwards with their eyes closed until they are out of sight. After many hours, Ming Lo and his wife open their eyes and to their astonishment the mountain has moved far away.

Ming Lo received worldly advice to use physical force, cause a ruckus, and offer a bribe in dramatic contrast to President Nelson’s ways to move mountains. Our living prophet, the real “wise man,” gave five inspired incremental steps in his April 2021 conference talk.

Isn’t this an extraordinary number-one suggestion on a list to increase faith in Jesus Christ? Who would have thought that becoming an engaged learner could work miracles? The prophet’s admonition is so much broader than to read scripture. It’s more than to study scripture. His words to become “an engaged learner” means to become an involved, absorbed, energetic, and dedicated to learning.

Our prophet couples faith with action, as James said: “Faith without works is dead” (James 2:28). President Nelson said, “Faith in Jesus Christ is the foundation of all belief and the conduit of divine power” (Ibid).

President Nelson could have said, “participate in ordinances” but he used the word “partake,” suggesting that we ingest and digest sacred ordinances. Would you have thought that ordinances have anything to do with building sufficient faith in Jesus Christ to move mountains?

To paraphrase James 1:5: “If any of you lack wisdom, let him or her ask Heavenly Father in the name of Jesus Christ for help.” That is, reach up to the person above you on the stairway.

Fabulous! You’ve straitened a confused subject for me. FAITH is a huge word for me and you have broken it down to a simple understanding. Thank you!!! I would love my own personal copy of your words.

Thank you, Marilynne. I love the analogy and the simple, yet direct counsel.