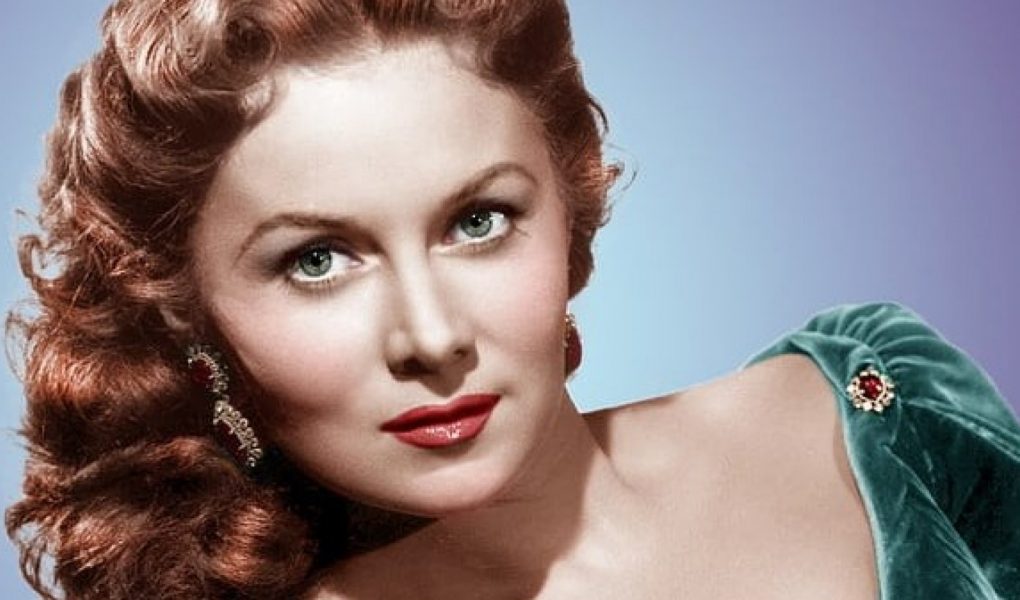 I was anticipating only a 15-minute photo op when I rang the doorbell in 2013 at the Century City, California mansion of movie star Rhonda Fleming, just a few blocks east of the Los Angeles temple.  I was there to present a “Bravo” award certificate on behalf of the “Associated Latter-day Media Artists (ALMA), a fellowship of Latter-day Saint media professionals.

But she and her husband Darol Carlson kindly invited me to lunch, and it turned into a delightful three-hour visit.  And the main topic of conversation?  Baptism for the dead.  Rhonda was hungry to talk about the “Mormon” faith of her youth.

I was saddened to learn of her passing away last October.  On August 10 of this year she would have been 98.

The Queen of Technicolor

Rhonda was known in the 1950’s as the “Queen of Technicolor”.  Movie directors loved how her emerald eyes and flaming red hair almost exploded on the silver screen.  In the 1940’s and 50’s she starred in over 40 films, including:

Among her co-stars were many of the leading men of Hollywood’s Golden Age, including:  Gregory Peck, Robert Mitchum, Kirk Douglas, Charlton Heston, Glenn Ford, Burt Lancaster, Bob Hope, Bing Crosby, Rock Hudson and Ronald Reagan (with whom she made four films).

Over lunch, she shared with me her oft-told story of an on-screen kiss with Reagan.  “Who would have thought”, she said, “that I was kissing the man who would later become President of the United States?”

A Nice Clean-cut Girl From a Mormon Background

Rhonda described herself as “a nice clean-cut girl from a Mormon background”.  Her grandfather John C. Graham was the son of some of the first Latter-day Saint converts taught by John Taylor in Liverpool, England.  He was the editor of several Utah newspapers, and also an actor and manager at the Salt Lake Theater.  She recounted in an interview, “I was raised a Mormon by my mother who was a devout Mormon and I was taken to church all the time as a little girl. That was in the Wilshire Ward of downtown LA.”  Her mother, Effie Olivia Graham, was a model and actress in New York, who performed with Al Jolsen.  In one interview Rhonda said, “I love the Mormon people and still many of my family are Mormons”.

Rhonda also shared with me how she obtained a personal testimony of Christ.  Early in her career she was under great pressures that lead to an episode of depression, and she felt totally lost.  She drove to a hilltop in the Hollywood Hills and poured out her heart in anguished prayer. “Dear God, if you’re really there, I need help now!” She then said,

“I suddenly felt the hand of God on my head. I felt this warmth that went from the top of my head and down through my body, and melted all of the ice in my body and I was filled with a love that was awesome; There was no room for anything but pure love. And I couldn’t wait to get to my car and I raced home and grabbed my little son and told him that I loved him and also my mother. I was just full of love.”

Rhonda has never been shy about sharing her faith.  In addition to her movie career she was a successful singer, headlining a one-time Las Vegas showroom singing act at the Tropicana. She also performed at the Hollywood Bowl in a one-woman concert of Cole Porter and Irving Berlin songs.  In between films, she, Jane Russell, Connie Haines and Beryl Davis were part of a traveling gospel music quartet called “The Four Girls”.  They appeared on national television, and made an album called “Make a Joyful Noise” that sold over a million copies.  In 1990 she starred in a short faith-based film called Waiting for the Wind that reunited her with former co-star Robert Mitchum.

Rhonda is most proud of the non-profit organization, PATH (People Assisting The Homeless),

whose mission is to break the cycle of homelessness by helping people to become self-sufficient.   She also created the Rhonda Fleming Family Center for homeless women and children.

When Mann, to whom she was married for 23 years, was ill and dying in 2001, Rhonda called the Wilshire Ward building to seek help for funeral arrangements.  After several unsuccessful attempts, she found a local Presbyterian church that would assist.  She became an active member of that congregation for the rest of her life.

Rhonda gives all the glory and credit to God for her success as one of Hollywood’s brightest shining stars of its Golden Era, when she was “discovered” by a talent agent walking home from high school.  She was signed to a major studio contract at age 16 without even a screen test.  She said, “Mine was a very rare and wonderful Cinderella story, a complete Cinderella story that could have only happened during the studio system era.”

And in her later years, she made every effort to make use of that success to help others.

“I don’t sit around talking about the past,” she told the Toronto Star in 1993. “I’m working harder than ever for my causes. God gave me great strength — it’s my Mormon upbringing.”

I loved this story, and had no idea about her background. Sure loved watching her films in the "olden days!" Thanks for sharing and informing.

She is my dad's second cousin if I remember right.