Words that Don’t Mean What they Used To | Meridian Magazine 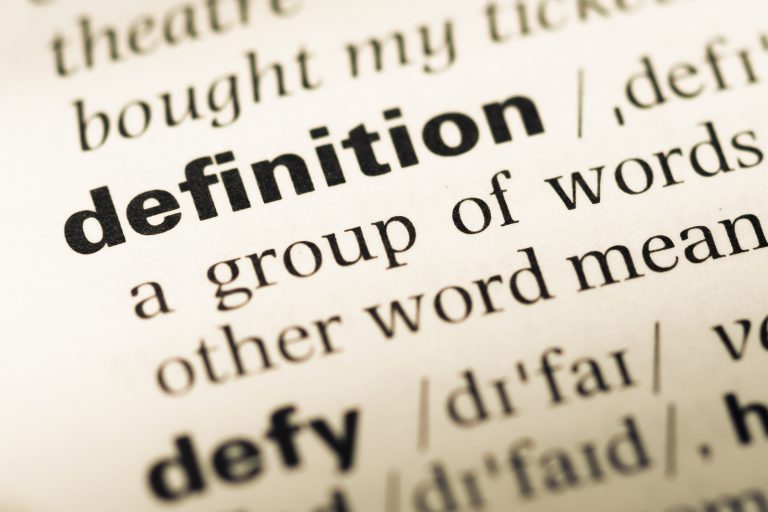 Words that Don’t Mean What they Used To

Jerry Sloan, great coach of the Utah Jazz, had a way with words. A simple way, thank goodness. My favorite Sloanism described the way people would argue about something and never find a solution – usually because they used the same words in different ways and Sloan would say, “we were talking sideways.” America has had a bizarre and vocal conversation about itself and its future with a whole lot of sideways talk.

I refuse to rehash this circus we’ve experienced, but find it notable to slay some of the words that have contributed to our sideways talk. Either get rid of the words or find a common definition so we can actually talk to each other in a meaningful way.

But, I digress from my list which follows in alpha sort (ugh…with that new phrase) after the first one which is truly convincing me to never eat at a restaurant again:

Perfect – note to all receptionists, and waiters. Ignore the grapevine talking points that this is the new way to say, “Ok.” Not saying it again the rest of your life would be…perfect.

Addicted, addiction – Got a problem? Just call it an addiction. Everything’s an addiction. So much so that, like beauty, and great, when everything is an addiction, one has to wonder what that really means. In my tiny mind an addiction is something terribly severe – deplorably severe that is most often chemically controlled. Instead, I prefer the word “obsessed.” I get obsessions. I’m obsessed with my wife. Can’t do without her. Don’t want to try. I suspect obsession is what many addictions really are but, you can’t get sympathy for your obsession. You’re supposed to control that.

Beautiful – have you noticed that beauty used to be truth, and truth beauty, “– that is all/Ye know on earth, and all ye need to know.” Or so wrote Keats. Something supreme. Other romantics were quite vociferous in stating physical beauty was the epitome of good looks. Today, I have no idea what any of this means because there’s inner beauty, comparative beauty, everything is beautiful in its own way, big and beautiful… blah, blah, blah. In the end, if EVERYTHING is beautiful, then, nothing is beautiful. No degrees of physical appeal or even inner beauty. Just blah. So, let’s get rid of the word or give it a rest. Got external or internal warts – they’re beautiful so we don’t hurt anyone’s feelings.

Bully and bullying – Yes. Insecure kids who got picked on at home did take it out on me and other kids. Religious bigots in mid-Illinois followed their preacher’s admonitions and parents dinner talk and took it out on me. Yep. I got over it. It happens. Tried never to do it to anyone. But… what they are calling bullying defies logic because, just like the all-inclusive, everything is it like addiction, beautiful, great, the labeling of Bullying to anything that offends us has made the word useless due to it’s all-inclusive meaninglessness. Yes, let’s ban that last word too.

Democracy – demanding an abolishment of the Electoral College is to stand for Democracy. Really? What country are you living in? America is NOT a democracy. It’s a Republic. We elect representatives (hence republic) to carry out the will of the electorate. We do it based upon State elections to determine those representatives. In the United STATES of America, States still matter and matter even more in the U. S. Constitution. There is NO national democracy in America. Never was. More now with popularly elected Senators, but, it is still not a Democracy – big D or little d democracy. You’d need a whole new constitution to get a democracy.

Deplorable – in an off-handed remark that I’m sure was not approved by her handlers and speech writers, Mrs. Clinton now famously called anywhere from ¼ of Americans to about ½, a basket of deplorables. The word’s denotative and connotative meanings have long been the same:  wretched, atrocious, awful, terrible, dreadful, diabolical. Mrs. Clinton fortunately regretted her deplorable statement (used correctly if not a bit hyperbolically by me) and apologized lest she be labeled as one who loved America while hating most of the people in it. Let’s keep the word as nasty of the nasties.

Equality – easy to say, impossible to find a definition you can live with. No one really wants total equality, just that which favors them. Just watch critics backstroke with justification to letting 12 year olds drive a Mack truck down their street. Suddenly the qualifiers of equality come out in hoards. It’s long been accepted that the word unique can’t be qualified – somewhat unique isn’t. Same with equal. Accept it as a word that is NOT absolute but politically determined.

Evil – my how good Christian folks love to tar someone with this label in total righteous indignation. One state delegate who came to my home with other delegates to listen to a candidate, stood and declared another candidate was “evil and that’s the end of it.” He thought he’d slayed the conversation but two very bright ladies wanted to discuss the meaning. I asked if redemption, repentance and forgiveness could be had by someone who had once committed evil. The ladies stuffed the pompous man into his cage of loathing. Too often people generate more heat than light. Calling someone evil is as bad as using a bunch of the other pejoratives I’ve already listed.

Existential threat – anyone really know what kind of a threat that is. If someone swings a fist at me, is that an existential threat or a threat? Yep, by the time you figure that one out you’re on your back. But Washington likes to create a phrase and run it into the ground to sound better than the hicks in fly-over country. When I worked there the newest phrase was “draconian cuts.” I asked anyone who said that “who was Dracos?” No clue. King of the clueless swamp.

Fascist – don’t like someone, you call them fascist and a lot of other “ists.” But stay to fascists. The political definition comes out of practice, not by a textbook definition. Italy’s dictator Mussolini and Germany’s crazy man dictator Hitler are at once called “right wing” and advocates of “state socialism.” I get definitional whiplash just hearing that. So when a person seems even meekly more authoritarian than Obama – who loves the pen for Executive Orders which sounds rather dictatorial – the left wails, “Fascist.” But those the left loves to call fascist have zero inclinations toward state sponsored socialism. Oh the joy of name calling.

Great – about the same. Everything is great. Great game, great speech, great catch, great nonsense. Good is the enemy of Great because suddenly great has to mean better than good and good is good enough for most situations. If all this greatness really happened, we’d dwarf the accomplishments of Alexander the Great.

Liar, lied – in the past when one said something he thought was true but turned out to be false, we’d call that a mistake, or speaking erroneously. But George W. Bush’s reign messed that up. It became, Bush lied and people died. Yet when I’d ask fomenters what Bush lied about they’d say he “lied about there being weapons of mass destruction.” When I’d say that most of the Democratic Senators, including John Kerry and Hillary Clinton also said there were WMDs in Iraq after seeing the same evidence Bush did, the fomenters yelled (always with the yelling oh my goodness), Bush Lied, as if yelling earnestly made something true.

In 2016 it seemed that Hillary Clinton was accused of many lies by the FBI but those were relabeled by adherents as malicious propaganda by the radical right. In 2016 Ted Cruz became a feline king of beasts known as Lion Ted Cruz by the fellow who all the media called a liar. Ted’s lies were excused also as malicious propaganda by the populist candidate which means… never mind. Trump’s bombastic statements were often short if not starved for factual basis. Did he knowingly say something that wasn’t true which used to be the definition of lying when we were raising our children? After watching Trump, his predilection of Tweeting (a word worth killing) late at night when he couldn’t or wouldn’t let anyone fact check him seemed to be his sin. Hyperbolae, normally something those intellectuals on the left pride themselves with being able to decipher and use. But with Trump’s hyperbolae, all nuance is thrown to the wind and liar is the reaction. Give lie a rest.

Misogyny. Misogynist – another impossible word to say five times in a row, but easy to throw around without substantive evidence. Usually, whatever you say to refute it, is thrown back in your face. Good word to delete. Just say “anti-woman” except one appears more erudite if one says the miso word.

MS – Can we please kill this made up appellation that is hard to say and simply a salve and binky for ultra-feminists. Real feminists like my mother who know what they’re about, and confidently brave the boardrooms of men when she’s 94 don’t need a made-up label to give her gravitas. Her credentials come from within.

Perfect – please stop! Had to repeat this one.

Populism – it would seem people are the basis of populism – like population. But it’s been transformed into some mysterious political movement where the voice of the people matters. And here I thought that was what democracy meant.

Racism, racist – wow does this grenade get tossed back when a person’s lack of logic is displayed. Racism is predicting behavior based solely upon a person’s race. African descendants (non-Arabic, non-European ancestry) with a darker skin can be just as guilty as any others born with a different skin pigmentation. Our crazy election brought out crazy talk about how Trump was racist and they used his intemperate and often wrong statements about Mexicans and Muslim as evidence. Stop. Did you think that? Then you’re off based too because… Mexico is a country filled with several races and Islam is a religion with more believers of different races than Catholics have. If one thinks that’s racism, time for a reality check.

Other words deserve a lobotomy or reverse semantic taxidermy, but that’s enough for now. I hope we can talk TO each other rather than talk sideways. Thanks, Jerry Sloan for common sense words straight off the farm.

No Millenial today, it seems, can begin a sentence without stating the word, "So," in front of it. Or doing the same with the word, "Okay." Some clever Millenials preface their sentences with BOTH strung together! "So, okay, . . ." And there exists no Kardashian on the planet who doesn't use the word, "like" liberally in every single sentence they utter. Do they, like, not realize, like, how, like, irritating it is to, like, listen to, like, any of them? Also, if you are a retail worker and are not physically standing within ten feet of the door when I walk in, to actually greet me, please do not yell "WELCOME!" to me across the store, for it doesn't actually make me FEEL welcomed to be yelled at like that. And lastly, if you are a retail worker at Anthropologie, "Welcome In" is no more hip a greeting than plain 'ol "Welcome". Just fyi.