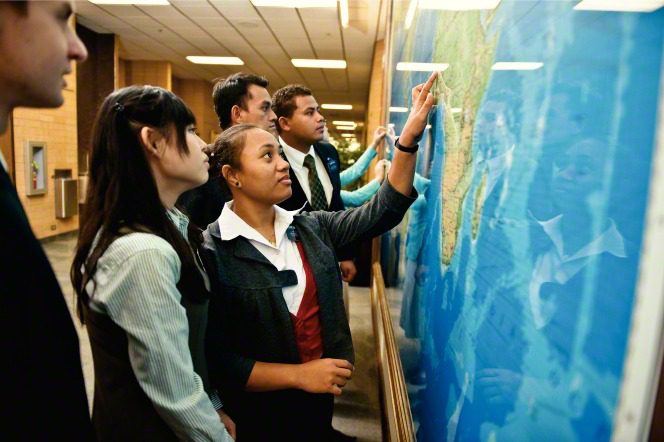 The Aspect of Missionary Work That We Emphasize Too Much

We’ve all seen videos, or been there in person, as a young man or woman opens a mission call and reads it aloud to the assembled family and friends. As soon as the specific mission and language are announced a gigantic cheer goes up, as well it should. This young person, willing to serve the Lord, now knows where they’ll be serving for the next 18-24 months of their life.

But, unlike real estate, where “location, location, location” is the main thing, here location is the very least important part. What matters to the Lord is the willingness to share the gospel and gather His sheep. There is no lamb, no sheep, anywhere in the world who is less important than another. A sheep in Billings, Montana matters just as much as a sheep in Sydney, Australia or one in Hong Kong or Russia or Nigeria.

But I think there’s a tendency to place too much hope and too much hype on the “where.” Youths are asked where they hope they’ll serve someday. I’ve done this, myself. And we all make our comments about the excitement of the exotic call, the difficulty of learning that language, the thrill of traveling to a new land.

Maybe we need to adjust our priorities. After all, this elder or sister isn’t becoming a foreign exchange student. They’re offering themselves to God, to be placed—and gladly so—wherever they’re needed, from Oklahoma to Okinawa. No mission matters more than another.

Recently we’ve seen missionaries from hurricane-ravaged Puerto Rico get reassigned, and some members have reacted with disappointment that this “foreign” location has been replaced with an assignment here in the boring old United States. A few years ago this happened with the Philippines as well.

And many missionaries have grumbled about delayed visas, causing them to while away their time stateside as they await their “real” mission. But does it really matter?

In last April’s General Conference, Elder David A. Bednar, said, “In the culture of the Church, we often talk of being called to serve in a country such as Argentina, Poland, Korea, or the United States. But a missionary is not called to a place; rather, he or she is called to serve.” (Called to the Work)

Our third son, called to Argentina, was first sent to Boise, Idaho to await his visa. And guess what—he not only loved it and made fast friends, but seeing how this other mission president operated gave him invaluable experience he was able to use working in the mission office in Argentina. It was as if he had been gifted with two missions, not just one.

I’ve spoken with missionaries who were stunned to be assigned to another country than the one they’d been preparing for. It may even be they are fluent speakers in, say, Mandarin, only to find themselves called to Europe. But the Lord knows about people’s hearts. And maybe there’s someone who speaks Albanian or Hungarian, who will respond to your spirit—and your fluency in Mandarin isn’t actually important.

Sometimes we forget the hand of the Lord in our lives. We forget that he can steer people who are sincerely seeking truth, right into our pathway. And this can happen stateside just as frequently as it can in Tonga or Iceland.

Some missionaries dread the foreign call, terrified of learning a new language. Our daughter worked at the Provo MTC for a couple of years after serving in Norway, and often reminded missionaries trying to learn that difficult language that “no one ever joined the church because you pronounced a word perfectly.”

The key is a willingness to love others and want to share this precious fruit with them, just as Lehi desired to do in his vision of the Tree of Life. Then, wherever you go it’s the right place, because you have the right assignment—simply to serve.