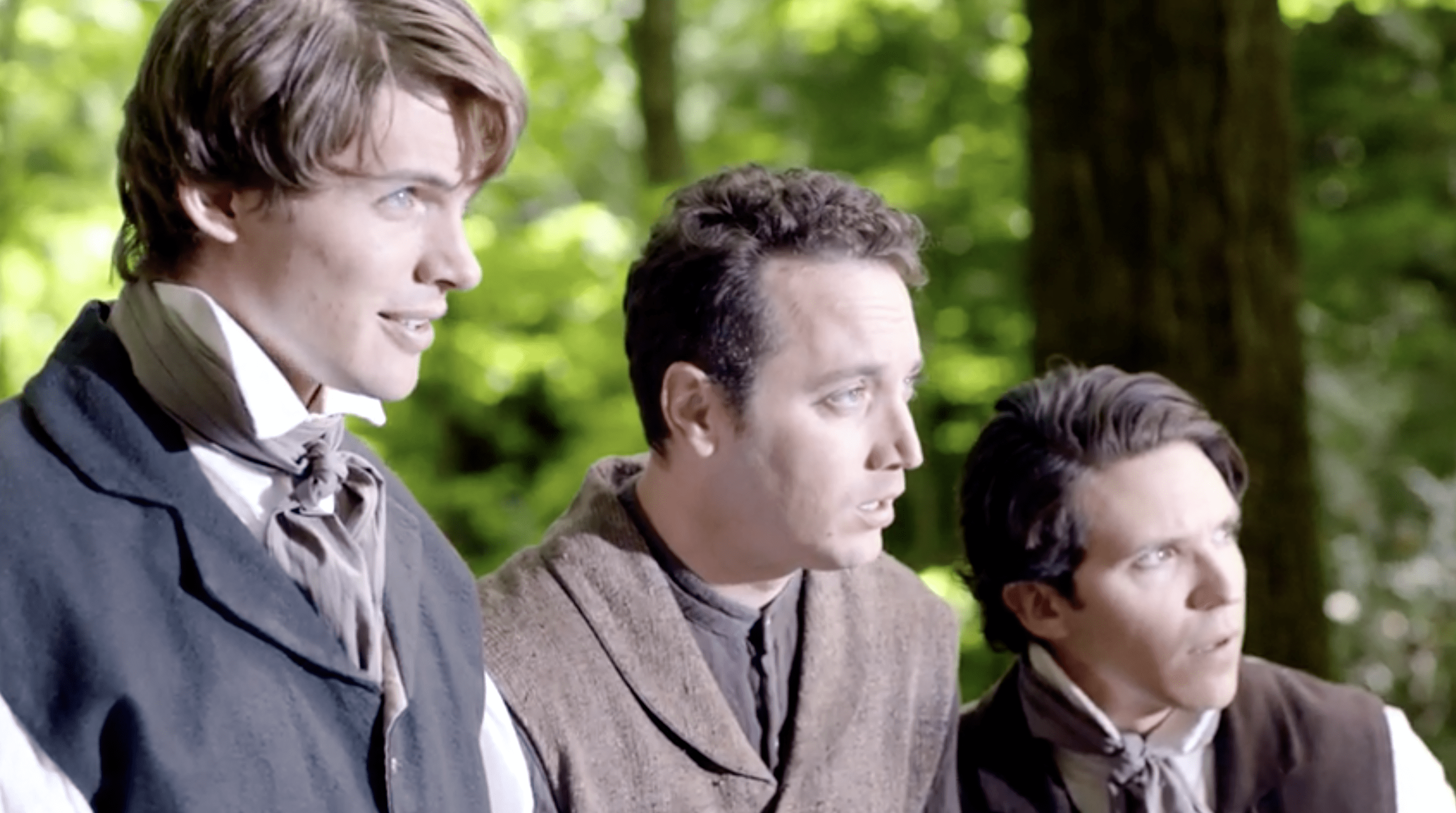 Why We Can’t Simply Dismiss the Book of Mormon Witnesses

I’ve been involved for the past several years in the launch and creation of the Interpreter Foundation’s “Witnesses” film project.  This has afforded me the happy opportunity of reflecting often and seriously on the experiences of the witnesses to the Book of Mormon, and on what they tell us.

The project is now coming to maturity.

Now, we’re beginning to pivot toward our next film project, which we’re calling “Six Days in August,” and which will focus on the question of succession following the assassination of Joseph Smith by an anti-Mormon mob in late June 1844 (https://sixdaysinaugust.com/).  Sidney Rigdon put himself forward as a “guardian” for the Church in Joseph’s absence.  Others staked their claims, as well.  And the Quorum of the Twelve Apostles, led by Elder Brigham Young, asserted apostolic leadership.  The nature and the future of the Church was hanging in the balance.  It’s a dramatic story, and a deeply significant one.

But I want in this column to return to the Book of Mormon witnesses.  I can’t promise that it will be the last time that I do so.  I’ve found their testimony compelling for many decades, since long before my involvement with the “Witnesses” film project, and I fervently believe that others should, as well.  But I have a specific reason for wanting to comment on the topic again, right now:

My attention was recently caught by an online exchange (explicitly responding to the “Witnesses” film project) between two anonymous but deeply disaffected members (or ex-members) of the Church of Jesus Christ of Latter-day Saints.  I know the real-life identity of one of them, and I happen to know that he has seen “Witnesses.”  The other, I’m reasonably certain, has not.  But I was disappointed in reading what both of them had to say.

The exchange begins when the one who, I think, has not watched the film denigrates the testimonies of the Book of Mormon witnesses.  Their accounts, he says, are no more valid than are the accounts of people who say they’ve been abducted by space aliens aboard UFOS, or that they’ve seen Bigfoot.  (Plainly, he regards both UFO abductions and Bigfoot sightings as obviously false and ridiculous; but such claims are not my topic here.)

It’s not clear, though, whether he regards what he has just said as an argument.  If it’s intended as an argument, however, it’s an obviously fallacious one.  The fact that people sometimes see things that aren’t there by no means proves, in any given case, that what a particular person has claimed to see isn’t there.  The fact that people sometimes see illusions doesn’t mean that everything that people see is illusory.  It doesn’t follow from the fact that some furry animals are squirrels that ALL furry animals are squirrels.  If Bob thinks that he saw a gorilla in his room when there was no gorilla in his room, that in no way demonstrates that all gorilla sightings are hallucinations.

For anybody who is actually interested in the truth, the evidence for or against the credibility of the Book of Mormon witnesses needs to be assessed on its own, independently.  Merely brushing them aside because other people have sometimes erred is an evasion, not a genuine engagement.  Assuming that the witnesses didn’t see the plates or an angel isn’t an argument, let alone a demonstration, that they didn’t see the angel or the plates.  It’s just an assumption.

More disappointing to me, though, than that rather disingenuous maneuver was the response of the other participant in the exchange, the one who, I know, had actually seen “Witnesses.”

He immediately agreed with the first commenter that the witness testimonies bear no weight at all as evidence.  And he proceeded to lay out his reasons for dismissing them:

First of all, he said, they claimed to have witnessed “supernatural” or “spiritual” events.  Accordingly, their testimonies are “merely subjective.”

But this doesn’t seem to follow at all.  “Supernatural” events aren’t, by definition, “subjective” events.

I’ll take as my counterexamples the two greatest miracles of, respectively, the Old and New Testaments, two miracles that principally formed and that continue to be celebrated by the communities to which those books gave rise.  These are the deliverance of the children of Israel from the forces of pharaoh when the sea parted before them and the resurrection of Christ.  Now, whether or not one actually believes that both of them really took place isn’t essential for the point that I’m making here.  Let’s simply assume, for purposes of the argument, that they did literally occur.  And let’s pretend that we’re actually speaking with eyewitnesses who saw them happen.

If the sea really parted, allowing the Israelites to cross, and then almost immediately crashed together again, destroying the pursuing Egyptian army, that was quite indisputably a “supernatural” event.  But it would make no sense simply to dismiss an eyewitness’s accounts of it, upfront and solely because it was “supernaturally” caused, as “merely subjective.”  If millions of gallons of water suddenly stood aside, permitting a host of people to pass through and then drowning their enemies, the cause of the phenomenon is utterly irrelevant to whether or not it should be considered objectively real.

Likewise, if Jesus really died on the cross, was buried, and then, on the third day, rose again from the dead, if his disciples really saw and touched his resurrected physical body, that was manifestly a miracle.  But their experience cannot, on that basis, be dismissed as “merely subjective.”

To argue that eyewitness accounts of these (and similar) events are “merely subjective” requires, well, an argument.  Simply asserting it without supporting evidence and analysis is a profession of (un)faith, a mere restatement of one’s own presumptions or prior beliefs.

This second person then goes on to make a more substantial additional point:  He observes that the witnesses to the Book of Mormon weren’t trained archaeologists or specialists in ancient metallurgy.  Thus, he declares, they possessed no expertise that would equip them to identify the plates as authentically ancient.  Accordingly, in his view, their testimony is of no value for establishing the historicity of the Book of Mormon.

He has a point here.  Although the Eight Witnesses said that the Book of Mormon plates had “the appearance of ancient work, and of curious workmanship,” they were no better placed than any other group of hard-headed farmers on the early nineteenth-century American frontier to make archaeological assessments or to confirm ancient workmanship.  In my judgment, though, he stretches his point far beyond its legitimate application.  Attesting to the antiquity of the plates wasn’t their principal divinely-assigned task.  We “know of a surety,” they testified, “that the said Smith has got the plates.”

What the Eight Witnesses establish, first and foremost, is that Joseph Smith really did possess literal metallic plates, which they claim not only to have seen but to have “handled” and “hefted”—plates that must, necessarily, have been created in a specific, literal forge.  Whether that forge was ancient or modern, their testimony alone cannot resolve in and of itself.  But they put the idea to rest that Joseph was merely lying or hallucinating when he claimed to possess such plates.  And if that doesn’t go all the way to proving the plates ancient, it definitely goes some distance in that direction.  If they never existed at all, they never needed to be made.  Neither anciently nor in the nineteenth century.

Here, though, the testimony of the Three Witnesses also comes into play.  Not only do they reinforce the evidence offered by the Eight Witnesses that the plates actually existed (“we . . . have seen the plates . . . we have seen the engravings which are upon the plates. . . we beheld and saw the plates, and the engravings thereon”), they also recount hearing the certifying voice of God (“we . . . know that they have been translated by the gift and power of God, for his voice hath declared it unto us; wherefore we know of a surety that the work is true”).

Now, again, one is free to contend that the Three Witnesses are relaying only their “merely subjective” experience.  (There are huge difficulties for such a contention, of course.  To induce the same supposedly “subjective” vision in three distinct individuals on two separate occasions—Oliver Cowdery and David Whitmer at one time, and Martin Harris at another—would be a remarkable achievement, if not altogether an impossible one.  But such a contention, if it is to be taken seriously and not just accepted solely on the basis of presuppositions, requires supporting evidence and analysis.  Taken at face value, though, their testimony supports both the objective reality of the Book of Mormon plates and the truth of what it contains—which surely seems to include the ancient history that it narrates.

What really surprised and disappointed me, though, was the second writer’s overall evaluation of the significance of the witnesses’ testimonies:  He pronounces them “fine” evidence of their sincere conversion to Joseph Smith and his teachings.  They felt, he says, that they had a “spiritual confirmation” of Joseph’s message.  “Period.”  And because they felt positive vibes about him and his doctrines, “they chose to follow him in faith.”

To so evaluate what the witnesses said is, frankly, to avoid engaging what they said.  Here’s a hypothetical parallel:

On the stand and under oath, several witnesses for the prosecution testify that, when they were positioned just a few feet away, they clearly saw Frankie repeatedly shoot Johnny at close range.  Quite reasonably, the people who are listening in the courtroom—including the jurors—judge the witnesses’ testimonies to be extremely powerful.  But then the lead attorney for the defense stands up.  Facing the jury with a kindly smile on his face, he allows that the testimony just given by the prosecution’s witnesses constitutes a fine illustration of their genuine belief that Frankie is guilty.  He makes no attempt to refute what they’ve said.  “They’ve drawn that conclusion,” he generously says, “and they really believe it.  But that’s all it is:  Sincere belief.  Faith.”

I doubt that the jury would be persuaded by such a defense.  I certainly hope not.  Imagine eyewitnesses to the assassination of Abraham Lincoln being told that all their testimonies amount to, really, is evidence that they liked Lincoln and supported the Union cause.

The witnesses of the Book of Mormon cannot be lightly dismissed.  Not, at least, by anybody who cares about intellectual integrity.