Why the Pilgrims Stayed | Meridian Magazine 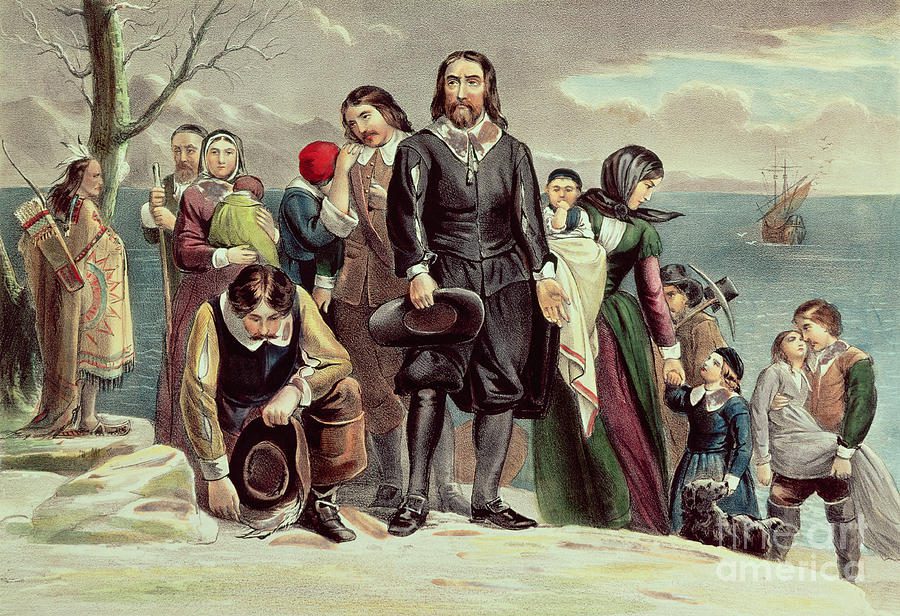 Why the Pilgrims Stayed

Cover image via Currier and Ives.

In honor of the Thanksgiving holiday and the pilgrims, we brought this article out of the archives.

On a chilly Thanksgiving weekend years ago, we traveled to New England with a fat, white notebook stuffed with information on our family tree. Our goal was to explore cemeteries, nose around in records, find names and, generation by generation become acquainted with these early Americans who were our forebears.

Now, we can quickly get online and turn to Relative Finder to see if we are related to anyone who came on the Mayflower—and 35 million of us are. For me, however, that weekend was the first time I had traced line by line back town by town in New England and arrived at the name “William White.” On my family history sheet was a notification by his name saying “Mayflower”.

I was surprised and intrigued, and hoped to learn more at our next stop which was Plymouth Rock. I knew that 102 pilgrims had come on the Mayflower. They had arrived in November 1620, and it had been a rough, 66-day journey as the ship was buffeted by strong westerly gales. The ship’s timbers were beaten in the waves and the damaged caulking hadn’t been sufficient to keep the seawater entirely out. In the cramped quarters, the passengers were often lying wet and ill, but this was not the worst.

When they arrived and sought to create shelter in the frigid New England weather, their already weakened bodies could not take the additional exposure—particularly the women and children.

When we arrived at Plymouth rock, I found a ranger and asked the question that seemed surprisingly vital to me. “Can you tell me what happened to William White, one of those Mayflower pilgrims?” I was anxious. I felt already attached to him in some way that was mysterious, but undoubtedly tangible.

He shrugged and said he didn’t know the fate of each individual, but he pointed to a monument just up the hill from where we stood and said, “All the names of those who died the first year are written there.”

We scrambled up the hill as quickly as we could, and I was hoping in no ordinary way that William White’s name was not on that memorial. I wasn’t sure why I suddenly cared so much, but I wanted to know that he had made it, and that his long, turbulent journey for religious freedom had not been only a journey to death. This was a deep impression on my soul. “Oh, please.”

Tears came unexpectedly to my eyes when I saw his name on the stone. He hadn’t made it. He had come so far to be stricken down. The pilgrims only began to create shelter the end of December, and by February 21, he was dead in a wilderness land so far from home.

He left behind his wife Susannah, their son Resolved, and their baby, Peregrine, the first of the pilgrims to be born in America. By that first Thanksgiving somewhere around half had lost their lives, including all the women, but four.

Why would the Whites and the other Pilgrims brave so much to come to a new, uncharted land? Most of them had already left England, where they had been religiously oppressed, to move to Leiden in Holland. They were not outcasts here but enjoying full religious freedom and solid employment. Coming to America was not about escaping from tyranny or poverty. They knew neither of those in Leiden, but had developed a thriving community.

Edward Winslow described their Pilgrim community in words that could have come right out of the Book of Mormon. “Never people upon earth lived more lovingly together.”

Some aspects of Leiden certainly concerned them. They worried that their children were not living their English culture. Some chafed that children were put to work instead of encouraging school. Certainly, some felt that there was moral decay in this growing Dutch city and that their children might to led astray. None of this completely explains why they would put themselves at such risk to put their lives on the line in a wilderness an ocean away.

Tim Ballard, who wrote The Pilgrim Hypothesis takes up this question in a way that is consistent with the scriptures. He writes:

I have tried hard to understand the academic reasons for the Pilgrims’ coming to America, but the answers I get, while honest and valid, never fully add up. I understand wanting to shield children from moral decay—but at the cost of these children’s very lives in a dangerous land? I understand wanting to avoid the possibility of an economic downturn—but in exchange for what? A certain economic downturn in America? Incurring a huge debt in order to afford shipping off to the New World to live in the mud? Exchange a possible economic recession for a certain economic depression? Exchange possible disease in Leiden, for almost certain disease in America?  Or avoid a possible war with Spain in order to confront an almost certain war with Native Americans?

Further, if things were so dire, why did only a fraction of the Separatist congregation get on a boat and go through with it? It could accurately be argued that more of the congregation would have gone had there been more resources or more space on the boat. But how hard did the others really push to get over to America? And what about the thousands upon thousands of other Dutch citizens, all confronted with many of these same hypotheticals? We didn’t see them jumping on ships and heading to the New World.

Once the Pilgrims got to America, there was nothing hypothetical anymore. Almost immediately, they were attacked by Natives, they were starved out, and then, one by one, they began to die. Within months, they lost roughly half of their total number to disease and starvation. Now how do the academic arguments for leaving Leiden compare? We have hypotheticals in Leiden against certain and lived hell in America. And yet, still, they stayed. Even as the Mayflower was preparing to pull out of Plymouth harbor and travel back to Europe on April 5, 1621, the small band of remaining survivors, still sick, still dying, and now widowed and orphaned could have returned. But they stayed. And it wasn’t because things were “just better” in America than in Leiden. This is why I’ve never been satisfied with the answers given for why the Pilgrims did what they did. There had to be something more.

The Lens of History Rounded out by God

Tim Ballard gives us an expanded understanding of why the pilgrims came and why they stayed:

As is often the case, it is through the lens of the gospel that history is rounded out. Just as only the gospel could explain why Lehi and his family left a good situation in the Old World to come to the New, only the gospel can expound on why the Pilgrims did the same in their time. Nothing was certain, of course, in the eyes of mortal understanding. Not Holland. And less so America. But God knew what was certain. He knew the outcome if only He could convince them to board the Mayflower and stay in America. Nothing makes satisfactory sense unless and until we consider the gathering of Israel. Unless and until we consider the need for God to bring a pure-hearted, religious, and covenant-minded people to begin the miraculous process of establishing a covenant land to host the restoration of God’s gospel and temples on the earth. This was key.

It couldn’t have been just any group. It had to be a special group, a chosen group, because the first settlers would set the precedent for all to follow; the first settlers needed to be believers in God and His covenant upon the promised land of America. If not, the covenant wouldn’t take effect. The miracles born of the covenant, which miracles built the nation and brought us the liberties found in the Constitution, wouldn’t take effect. And the gathering of Israel and the restoration of the gospel, which require that liberty born of miracles, would be severely jeopardized. That’s how important the Pilgrims were.

The Book of Mormon teaches us that “there shall none come into this land [America] save they shall be brought by the hand of the Lord” (2 Nephi 1:6). History seems to corroborate this scriptural promise. Like I said, this wasn’t a reactive move; it was totally proactive. It wasn’t something necessary for survival. Their existence or livelihood wasn’t being threatened in Holland as it had been in England. On the contrary, in many ways (as discussed above), they were doing just fine. Scripturally, the Pilgrims—if they were who we think they were—were called of God to come to this land.

The Pilgrims met together in Leiden to decide what they would do, and according to one attendee “The Lord was solemnly sought in the congregation by fasting and prayer to direct us.”

By the time the service was over, it was decided. The Lord had spoken. They would go to America. Pastor John Robinson drafted a letter stating the reason for the voyage. The principal reason he gave was that “we verily believe and trust the Lord is with us . . . and that He will graciously prosper our endeavors . . . [and] we are knit together in a body in a most strict and sacred bond and covenant of the Lord.”

They knew what they were doing and for Whom. They were fulfilling a covenant that had been upon this American land for millennia.

In summation, while the Pilgrims were looking for ways to improve their situation, as they always did, the option of moving to America (irrational as it may have seemed to many) fell before them. They took it to the Lord, who they felt consecrated the idea. Knowing God was with them and knowing they were to take the gospel to all the world, they trusted in the protection of a covenant they made with each other and the Lord. Indeed, they were called. That was why they went. And that was why they stayed.

I think my tears when I learned that William White only lived until February were not just for the pathos of his situation with a family and a new baby crying alone without his father in that wilderness. I think my tears were gratitude at this act of consecration by 102 people that was made real for me this morning as I stood before the memorial to those who had died in the first months.

When I did my DNA Ancestry check I discovered that my 9th great-grandfather was Resolved White. I am eternally grateful that God saved him through the difficult times he and his family endured during the first few years here in America. I hope to meet him some day.

The most important takeaway from this article is that the Pilgrims were chosen and truly inspired by God to set the stage for the restoration of the Gospel. "Thanks be to God!"