Who authored the Book of Mormon? | Meridian Magazine 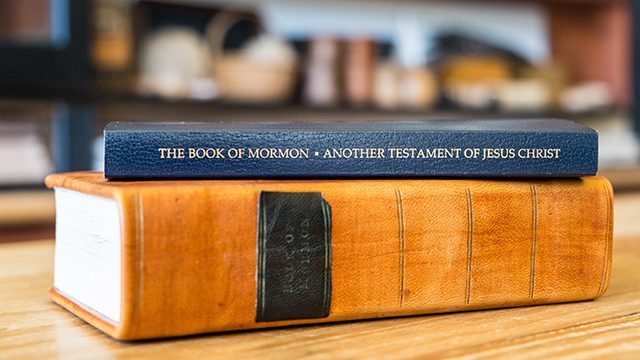 Who authored the Book of Mormon?

To read the previous article in this series, CLICK HERE. Cover image via Mormon.org.

March 26, 2030, marks the 200th anniversary of the printing of the Book of Mormon. For the past 200 years, numerous naysayers have taken shots at Joseph Smith and the Book of Mormon, with claims ranging everywhere from Joseph wrote it himself using a vivid imagination, to his plagiarizing other texts, to his supposed amalgamating and co-mingling existing books and writings, etc. Critics have been quick to give credit to everyone and everything for the origin of the Book of Mormon, except the very person the Book of Mormon writers themselves identified.

So, ultimately, who is actually responsible for the writing, compiling, and coming forth of the Book of Mormon?

In Washington DC, in 1840, Joseph affirmed that the Book of Mormon was “communicated to him, direct from heaven. If there was such a thing on earth, as the author of it, then he was the author of it; but the idea that he wished to impress was that he penned it as dictated by God” (The Words of Joseph Smith, xx).

As Nephi inscribed on the plates he himself produced: “And now, my beloved brethren, and also Jew, and all ye ends of the earth, hearken unto these words and believe in Christ; and if ye believe not in these words believe in Christ. And if ye shall believe in Christ ye will believe in these words, for they are the words of Christ, and he hath given them unto me; and they teach all men that they should do good. And if they are not the words of Christ, judge ye—for Christ will show unto you, with power and great glory, that they are his words, at the last day; and you and I shall stand face to face before his bar; and ye shall know that I have been commanded of him to write these things, notwithstanding my weakness” (2 Nephi 33:10-11).

Over a thousand years later, Mormon similarly testified that the Savior directed him what to record on the plates: “Therefore I, Mormon, do write the things which have been commanded me of the Lord. And now I, Mormon, make an end of my sayings, and proceed to write the things which have been commanded me” (3 Nephi 26:12). Four chapters later, Mormon again stated, “Hearken…and hear the words of Jesus Christ, the Son of the living God, which he hath commanded me that I should speak concerning you, for, behold he commandeth me that I should write, saying…” (3 Nephi 30:1).

So, from beginning to end the Savior directed the writing of the Book of Mormon. It is one of the most unique among books published on earth. It had prophet-writers who were inspired of God, prophet-editors who compiled records and who were directed about what to include and what to leave out, a prophet-guardian who watched over the record as it lay in the earth, and a prophet-translator who published it. None of that was coincidental. The entire process was guided and watched over by the Savior Himself. For those with eyes to see, ears to hear, and hearts to feel, the Book of Mormon is a priceless gift from the Savior, prepared by Him to bless and help those living in the latter days.

“God, with his infinite foreknowledge, so molded the Book of Mormon that we might see the error and know how to combat false educational, political, religious, and philosophical concepts of our time” (Teachings of Presidents of the Church: Ezra Taft Benson [2014], 132).

“Today I would like to speak about one of the most significant gifts given to the world in modern times. The gift I am thinking of is more important than any of the inventions that have come out of the industrial and technological revolutions. This is a gift of greater value to mankind than even the many wonderful advances we have seen in modern medicine. It is of greater worth to mankind than the development of flight or space travel. I speak of the gift of the Book of Mormon.…This gift was prepared by the hand of the Lord over a period of more than a thousand years, then hidden up by Him so that it would be preserved in its purity for our generation. Perhaps there is nothing that testifies more clearly of the importance of this modern book of scripture than what the Lord Himself has said about it. By His own mouth He has borne witness (1) that it is true (D&C 17:6), (2) that it contains the truth and His words (D&C 19:26), (3) that it was translated by power from on high (D&C 20:8), (4) that it contains the fulness of the gospel of Jesus Christ (D&C 20:9; 42:12), (5) that it was given by inspiration and confirmed by the ministering of angels (D&C 20:10), (6) that it gives evidence that the holy scriptures are true (D&C 20:11), and (7) that those who receive it in faith shall receive eternal life (D&C 20:14).

“[The Book of Mormon] was written for our day. The Nephites never had the book; neither did the Lamanites of ancient times. It was meant for us. Mormon wrote near the end of the Nephite civilization. Under the inspiration of God, who sees all things from the beginning, he abridged centuries of records, choosing the stories, speeches, and events that would be most helpful to us….We should constantly ask ourselves, ‘Why did the Lord inspire Mormon (or Moroni or Alma) to include that in his record? What lesson can I learn from that to help me live in this day and age?” (“The Book of Mormon–Keystone of Our Religion,” General Conference, October 1986).

Jeff, This discussion is very compelling. Thanks. I have often thought about Pres Benson's statement about the Nephites never having the Book of Mormon. What constituted their scriptures? We know they had some scriptural texts like the brass plates. How many writings of previous prophets did they have?