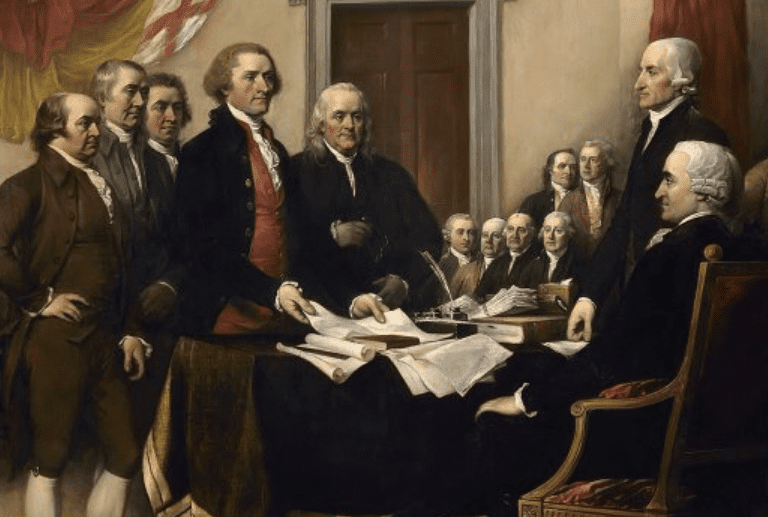 Wilford Woodruff stated the following at the fall general conference in 1877.

“Two weeks before I left St. George, the spirits of the dead gathered around me, wanting to know why we did not redeem them. … These were the signers of the Declaration of Independence, and they waited on me for two days and two nights. …” (“Latter-day Temples,” Ensign, Jan. 1972, 31)

Shortly after President Spencer W. Kimball became President of the Church, he assigned me to go into the vault of the St. George Temple and check the early records. As I did so, I realized the fulfillment of a dream I had had ever since learning of the visit of the Founding Fathers to the St. George Temple. I saw with my own eyes the record of the work which was done for the Founding Fathers of this great nation, beginning with George Washington.

Think of it, the Founding Fathers of this nation, those great men, appeared within those sacred walls and had their vicarious work done for them. (Ezra Taft Benson, “The Constitution—A Glorious Standard,” Ensign, Sept. 1987, 8)

In his journal entry of Sunday, 19 August 1877, Elder Woodruff, then a member of the Quorum of the Twelve and president of the St. George Temple, wrote: “I spent the evening in preparing a list of the noted men of the 17 century and 18th, including the signers of the Declaration of Independence and presidents of the United States, for baptism on Tuesday the 21 Aug 1877.”

His journal entry for August 21 reads, “I, Wilford Woodruff, went to the temple of the Lord this morning and was baptized for 100 persons who were dead, including the signers of the Declaration of Independence. … I was baptized for the following names.” He then listed the names . . . including forty-five “eminent men” of several nationalities. The baptisms were performed by J. D. T. McAllister, a counselor in the temple presidency.

Elder Woodruff continued his journal entry: “When Br. McAllister had baptized me for the 100 names, I baptized him for 21, including Gen. Washington and his forefathers and all the presidents of the United States that were not on my list except Buchanan, Van Buren, and Grant.” (The work for these presidents has since been done.)

“It was a very interesting day,” Elder Woodruff continued. “I felt thankful that we had the privilege and the power to administer for the worthy dead, especially for the signers of the Declaration of Independence, that inasmuch as they had laid the foundation of our Government, that we could do as much for them as they had done for us.

“Sister Lucy Bigelow Young went forth into the font and was baptized for Martha Washington and her family, and seventy of the eminent women of the world. I called upon the brethren and sisters who were present to assist in getting endowments for those that we had been baptized for today.” ( The quotes in the preceding five paragraphs are from Wilford Woodruff’s journal, typescript, vol. 7, Church History Library; spelling and punctuation modernized, and are cited in Thomas E. Daniels, “I Have a Question,” Ensign, Oct. 1991, 62)

Vicki Jo Anderson as Marion has stated wrote the book on this great Wilford Woodruff experience. I recommend it to all as our Founders have been baptized and received their endowments. Some were made High Priests of the list of eminent men, Columbus, Franklin, Wesley, Washington. One unnamed received a second anointing. God bless America.

Great book (if you can find a copy) to follow up this story: "The Other Eminent Men of Wilford Woodruff" by Vicki Jo Anderson.