When Spouses Fail to Understand Each Other | Meridian Magazine 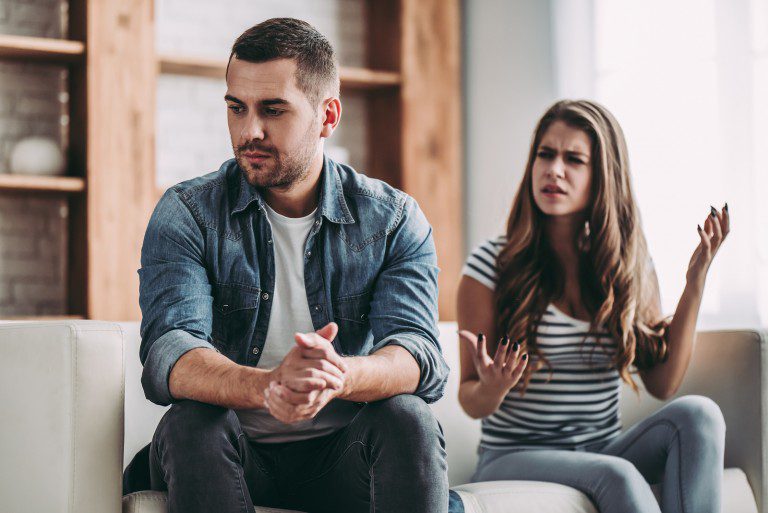 When Spouses Fail to Understand Each Other

Let me take you behind the scenes into the marriage of a couple with three children under the age of five. Let’s call them Michael and Jessica, just because those were the Number One baby names thirty years ago.

Jessica’s been handling the kids all day, working from home part time, doing laundry, trying to get her Sunday lesson prepared, and fixing dinner. She loves the kids, but can’t understand why she got the most challenging, willful spirits God could send her. Everyone else seems to have been sent fairly compliant children, but hers seem like maniacs.

Michael has a stressful job and comes home exhausted. He follows his usual routine to unwind with a video game. Jessica, with the baby on her hip, just stares at him. Is he completely clueless? Finally she says, “Hellooo? I could use some help, here.”

Now he stares at her. Is she completely clueless? He just fought the dragons at work, had a horrible day, and clearly needs to relax. She’s been home all day and has no idea how fierce the world is out there.

Jessica registers his reluctance as a pot of spaghetti is boiling over. We hear a crash in the living room and they both dash in to find the four-year-old jumping from cushion to cushion while wearing a superhero cape, which caught on a lamp. The lamp is now in pieces on the floor.

The five-year-old is reminding the four-year-old that he’s really going to be in trouble now, and the four-year-old is crying. The baby doesn’t know what’s going on, but joins in the crying anyway. Michael and Jessica order the kids to sit at the kitchen table, strap the baby into her high chair, then clean up the mess as tensions rise.

He thinks she’s letting the kids run wild and expecting him to waltz in and police the place.

She thinks this is not the guy I married. (None of this came to mind when she was choosing a venue, a photographer, a florist.)

He thinks this is not the girl I married. (None of this came to mind when she was telling him how much she adored him, how much she loved his ambition.)

She thinks she’s unappreciated, taken for granted, and feels lonely as the only parent in the picture.

He thinks she’s taking him for granted, expecting him to work all day and then come home and work all evening.

She thinks her tasks are overwhelming—trying to earn extra money, cleaning, washing clothes, preparing meals, keeping the kids out of the emergency room. He has no idea.

He thinks his tasks are overwhelming—coping with a company that’s on the brink of failure, dealing with hostile coworkers, wondering if he should switch jobs. She has no idea.

She thinks he’s trying to shame her for not having the house under perfect control.

He thinks she’s trying to shame him just for needing a little down time.

He thinks she’s so focused on the kids that she has no energy left for him.

One of them is scooping shards of glass into a dustpan, the other picks up a bent lampshade. They stand up and shout in unison, “Why are you like this!”

Now I know there are some reading this who will think I am a stalker and was watching all this from a hiding spot in the coat closet. But this is a couple I know.

Others will read this and say, “Videogames are the culprit. Too many young fathers are glued to a screen, and neglect their families.” And that is actually a huge problem (ask any bishop) today.

But there’s much more going on here. This couple has not honestly communicated in years. Each of them has expectations the other cannot possibly know, yet both expect the other to read minds. (I might add that this could easily be reversed in many homes, where the wife works away from home all day, and the husband has more time with the kids.)

Without casting blame or using disrespectful language, these two need to talk. They need to express their frustrations, admit their weaknesses, and become a team again. In some cases, there never was a team. They never had an “us against the world” moment, but they need that. They need a feeling that both of them are invested in both of their workdays. Michael’s issues at work should matter to Jessica, and she needs to compassionately help him talk out his concerns. Jessica’s issues at home should be a priority for Michael as well, and he should feel part of the parenting, not just a guy who pops in at night.

Both of them need to express genuine appreciation for what the other one is doing. When we don’t feel understood or appreciated, we’re more likely to drop the ball—Why try if no one else cares how hard I’m working?

They need to play. Together. On a date. They need to rediscover the fun and the charm that used to weave through their hearts. They need to remember why they fell in love in the first place. Romance cannot thrive in a contentious, resentful atmosphere. Making sure they have a date night once a week will actually benefit the children, by creating a more solid marriage for the parents, and a more stable future for the whole family.

They need to pray together, and pray for one another. They need to study the scriptures together, and then pick each other’s brains and get ideas and reactions each one has to what was just read. Even if it’s just five verses, it’s a start.

Any one of these measures will help, but implementing all of them can yield a complete turnaround.

Michael can come home, see the bedlam, and offer to help even before Jessica knows he came through the door. Jessica can also know (from touching base earlier) that his day was a stress monster, and can sympathetically urge him to tell her about it. No, probably not when a broken lamp needs to be cleaned up, but as soon as things are back under control. It’s the caring that counts.

They can share the details of what their day actually looks like. They can be emotionally present for one another, actively listening and asking questions. Their partner might actually have some suggestions about how to navigate the storms.

Once the kids are in bed they can talk frankly about their intimate life, their desires or lack thereof and why. They can approach the topic as two people who love each other, instead of as me versus you. They can make a plan to improve the situation. Sometimes spontaneity is overrated and a plan can be a good thing.

They can set goals and then work together toward them, instead of paddling along in parallel paths but not actually in the same boat.

Most of all, they can see one another the way God does, always appreciating the good inside each one of us. An eternal perspective can make an enormous difference.

For many couples the swirl of infatuation carries them through the honeymoon and even beyond. But eventually reality distills upon them and the trials of daily life creep in (or slam in, in some cases). This is when they need skills that, sadly, aren’t taught in school unless you major in it. This is when they need maturity they might not have developed yet. But that’s the beauty of being a couple that shares their feelings—you can approach these struggles as a team and know your spouse is dedicated to marital success just as you are. And when those inevitable rough patches arise, that’s pretty comforting news.

Learn how testosterone works. Men are depleted when they get home. Tell him you will give him 30 mins to " rest' before you bombard him. Then he can physically help you. He can rest by video/ sleeping for 25 mins/ walking..whatever works for him. Each man is different, but all men are the same. Then you will get the best out of him during the evening if his hormones are back up. You can fight mother nature..but she will always win, so work around his exhaustion once home...then he can be there for everyone. Ask him for 30 mins for you later..not as he walks in. Never going to work! Also once kids leave the table..that's your time to talk. Train your kids they can't return to the table to interrupt you, unless there is blood. That can be part of your intimate time each day..or a date night!? Its very hard to have date night weekly when u have no sitter/ money/ hate each other, so try the table. .