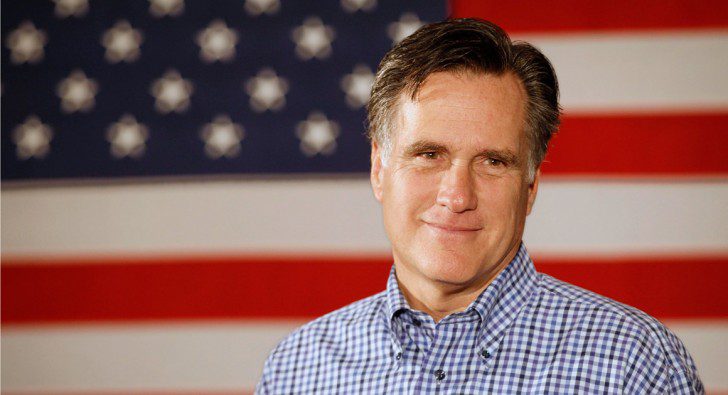 What the Media is Saying about Mitt’s Potential 2016 Run

Mitt Romney gave his strongest signal yet that he is considering a 2016 presidential run when he told about 30 donors in New York on Friday, “I want to be president.” Ann, who was once emphatically against a run has changed her mind, and his sons remain split. Here’s what the media has to say about it:

Bush’s sudden focus on the race in recent weeks has put pressure on Romney to decide soon. Romney has been in regular conversations with major donors, some of whom are pushing him to run again, but confidants have also warned him that his window of opportunity could shut if he does not declare his intentions within 30 to 60 days.

“What he has said to me before is, ‘I am preserving my options.’ What he is now saying is, ‘I am seriously considering a run,’ ” said Bobbie Kilberg, a top donor from Virginia who raised millions of dollars for Romney’s 2012 bid. She was briefed by attendees on Romney’s Friday comments. “And he said that in a room with 30 people. That is a different degree of intensity.”

But Romney supporters have argued that there’s a clamor for people who would like to see someone emerge as a leader for the Republican Party during a particularly fractious time, and Romney recently began making clear to donors and supporters that such talk was affecting his thinking.

The battle between Bush and Romney, once thought to be a long-shot, looks much more plausible after Romney told a group of about 30 top donors in the New York office of Jets owner Woody Johnson that he is considering a third bid for the White House — and that they were free to go tell their friends.

Romney felt he needed to tell his donors what he was thinking “so they could take a pause before they start backing Jeb — that’s really what precipitated this,” a source who attended the meeting said.

…The senior Republican advised Romney that he could probably put together a pretty compelling video stringing together all his 2011 and 2012 statements about Obama’s weaknesses and failures and he will be seen as somewhat prophetic.

The Republican said he told Romney that he will be a formidable candidate, but it will be a slugfest.

Members of Romney’s inner circle remain skeptical that the two-time Republican presidential contender will make a third bid for the White House, even after he told top Republican donors Friday that he was weighing another try for the Oval Office in 2016.

Former aides say new hints that he may run again are about stirring the waters, not winning the nomination…

One Republican consultant suggests that posturing over a possible campaign was a way to signal that he wouldn’t cede automatically donors or staff to Bush. “Money for some is more important than policy,” says the consultant.

This is why veteran operatives of the Romney campaigns consider the revived rumors of a 2016 campaign overblown. They have long scoffed at the notion he’d run again. They believe their former boss would be an excellent president. They say Romney agrees. At the same time, they don’t expect a campaign to materialize.

First, consider the similarities in their 1960 and 2012 presidential contests. Romney and Nixon were both mighty warriors, but they still lacked the natural ease of the best retail politicians. In person, they were warm, charming— even gentle. But on television it was different. When they debated their cool and telegenic opponents, they sometimes appeared square and old-fashioned in comparison. They just didn’t connect the way successful presidential aspirants typically do.

So, when they lost the general election, many in the press quickly wrote their political obituaries. All conceded their brilliance, stamina and mastery of the facts—especially those of the troubles brewing overseas. But they were, by most accounts, finished.

But the tenacious Nixon would prove his naysayers wrong by once again capturing the GOP nomination eight years later, a feat made all the more remarkable by the further diminishment of his brand in 1962 when he lost a race for a lesser post, the California governorship. There was likely not a soul in the United States who believed he could shake off such visible losses.

Of course he did shake them off, and for nearly 50 years, Nixon’s 1968 feat stands unmatched. Besides Adlai Stevenson, he has been the only presidential nominee—of either party—to overcome the stigma of losing a general election to be offered a second chance as the party’s nominee.

Strength of conviction, wisdom to listen, ability to make decisions, business and political experience and, above all, honesty. This is my opinion of Mitt Romney. He is the best candidate we have and should have him as president.

I have been talking up Mitt's running again since his loss last time, even though almost everyone said he would never run again. I could see the change of heart in the Evangelicals and, even some Democrats who are fed up with the lack of family values and morality we see everyday. We need a leader who is not only an icon of the American family, but one who has the business and common sense to be able to able to work across the aisle and not cause the destructive political divide we have seen in the current administration.