What Changes Will We See in the Salt Lake Temple Renovation? New Details and Renderings Revealed | Meridian Magazine 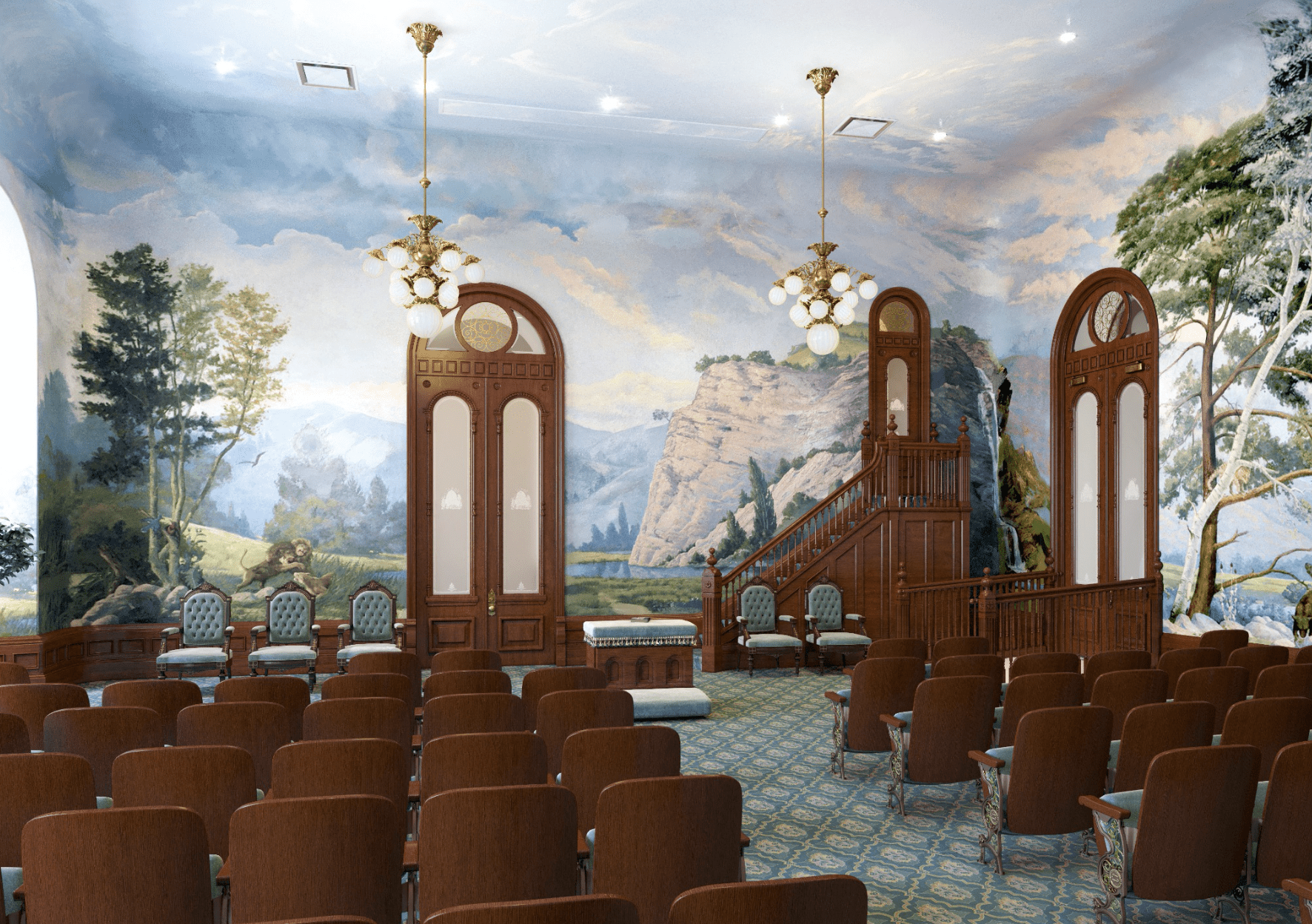 What Changes Will We See in the Salt Lake Temple Renovation? New Details and Renderings Revealed

The much-anticipated closing of the Salt Lake Temple for a four-year renovation is coming Dec. 29, with last temple sessions being held on the 28th. It is a time of some poignancy for those for whom every inch of temple square is known and beloved, but also a time of rejoicing as the work being done here will preserve, restore and renew the building which the pioneers created out of the steel and iron of their own character.

“I think the pioneers are cheering,” said Brent Roberts, Managing Director of Special Projects. “They are saying you are going to save our temple forever.”

Andy Kirby, the Director of Historic Renovations, said that when people ask him what is the life span of a temple, he quips, “The end of the world, plus a thousand years. We are using the very best technology we have today, within reason, to preserve the temple.

The thinking and planning for this renovation has been in the works for years and most recently has involved 350 consultants and contractors working. During the four years of renovation as many as 1,000 people will be employed per day on the task. The preparation to undertake a task of this scope has been extensive and meticulous.

The need for renovation is important because the air conditioning, plumbing, electrical system and much else in the building is dated and needs to brought up to par, but even more significant is that the temple has had no more seismic protection than the pioneers gave the foundation.

Through the years, as earthquake protection for buildings became more technologically sophisticated, Roberts admitted that he wondered what the Church would do to protect the Salt Lake Temple.  “Would the Church ever move forward on a project of this magnitude? Would the Lord allow us to undertake this kind of project?” Studies examined the potential damage to the temple if an earthquake should happen.  He found himself growing anxious over the years.

As seismic technology to protect buildings advanced, so did discussions among the First Presidency and the apostles, which went on for many years waiting for the timing and the technology to be just right. The priesthood leadership under President Hinckley, President Monson, and President Nelson have all consulted and worked on this plan.

To protect the temple, a base isolation system will be placed under the foundation of the temple, separating the temple from the earth seismically, so that if an earthquake happens, the temple will feel less impact because it is separated from the ground.  The stone will also be tied together with steel so that it will be more solid during an earthquake.

Roberts said, “Almost everything that we can save, we’ll save. We’re going to take every bit of stone that we can salvage to be used in other areas. We are going to save the old footings. I think of the pioneers who had to bring stone to build this temple on wagons and trains and I just have to fill out an order, send someone to take a look at the stone and ship it here. When you see the size of some of those actual stones in the Salt Lake Temple, I’m glad they did it and not us.”

What Will Change, What Won’t

The north annex of the temple will be demolished and then rebuilt under ground to house dressing rooms and administrative offices in keeping with the historic feel of the renovated temple.

The south visitors’ center will be demolished and replaced with two smaller visitor centers.

When the walls are returned, there will be six entrances to Temple Square for easier access and the south entrance will open right into a perfect view of the temple.

Roberts said, “We are going to save and salvage every tree that we possibly can and add to those trees with landscaping that is unbelievable. There are renderings for this that will come out in the future.

The new renderings revealed today were of key portions of the new temple interior. Changes in architectural appearance will not be significant. Someone who does not know the temple well may not recognize the structural differences, however, the interior will be redone to be more like the original 19th century appearance.

Emily Utt, the Historic Sites Curator said, “When you walk into the building you will see and feel a 19th century building.” She has spent five years of extensive study to decipher what the temple looked like when it was first dedicated, examining the layers of paint on the walls, diaries, drawings, early photographs and any clue to understand how the interior of the temple originally looked.

Kirby said, “The Church history department and the temple department created an historic structures report which was a great study of the details of the design and construction. We have great photos, documentation of every aspect from the footings to the spires to different renovations that have been done in the past. We use that as a strong precedence.

The last time the temple was extensively renovated was in the 1960’s, and the woodwork was largely painted white with walls in other pastel colors.”

Murals will be restored and cleaned. Previous repairs that are not quite to the level a temple requires will be fixed.

Utt said, “Every inch of this building needs to be touched because of the seismic and structural work that needs to happen and the new air conditioning, plumbing and electrical systems, but every inch of the building that is being touched will be respectfully cared for. We are taking care to do our very best to keep intact even those upper rooms that nobody will ever see.

“The building is a living testimony of people who dedicated their lives for forty years to its construction, and restoring the building is one of the best ways we can honor their consecration.”

Kirby, said that when the temple closes at the end of December, “We will begin by decommissioning the temple, and that involves removing every movable item from wastebaskets to historic art and we have a direction for everything to go. Some of it goes to conservationists and comes back to the temple, some goes to storage and then back to the temple, and some gets repurposed to other temples. Then we’ll begin the abatement of hazardous materials and demolition. By about summer next year, you’ll see us excavating a forty-foot hole north of the temple and we’ll reconstruct a new annex that will be easier to find your way into the temple that will meet modern standards of temple design and comfort for patrons, and be beautifully sympathetic in its architectural and interior design.

It will all be underground except for two entrance pavilions which are the entrance to the temple.

Roberts said, “This is not an easy schedule It is a tight schedule, but we don’t want the temple to be closed one day longer than it has to be.”

In addition, guests will be invited to a more open Conference Center for a new experience. The cut-away model of the temple, now in the South Visitors’ Center will be moved to the Conference Center, a new statue of Christ will be placed there and a new 17-minute film on the purpose of temples will be shown. New curation will be available on the art in the center and temple artifacts will be on display.

The terrace will become the perfect viewpoint to see the construction. Roberts said, “Guests will be able to stand at the window and see all this unfold. They will be able at last to see the historic foundation of the temple which was built by pioneers with pickaxes and hand-held tools. I’m bringing my grandchildren down to see this I want to involve them. This really is our temple.”

What lies ahead in four years, is not only a renewed Temple Square, but a temple open house that probably hasn’t yet had its match. For the first time in many decades, we can say to our friends. “Come to the temple open house Come and see every room. Come and see this historic and iconic temple. Since, it’s been a long time since we’ve been able to open the Salt Lake Temple doors publicly to others, that will be rare moment. But right now, that is a long time away, and all the brides who were hoping to marry in the Salt Lake Temple might have to put off their wedding for four years or make other temple plans. It might feel like a long four years of waiting for all of us.

The short answer is every post millennium temple built has one sealing room specially designated to serve as a Holy of Holies (or Most Holy Place). Tellingly, it will have a locked door, accessible from only within the sealing room, where the Second Sealing (Washing of Feet) ordinance is performed. Only the temple president has a key to this room. For example, Sealing Room 8 in the Provo Utah Temple has such a door. Therefore, any temple can be tasked with providing a Holy Place for the Lord, at any time. It is simply dedicated for the purpose, the work is done, and then it is temporarily "decommissioned" (for lack of a better word), reverting to a standard sealing room again, until needed for its special purpose. Having said all that, I'd imagine the First Presidency would still prefer having a separate, fully-dedicated Holy Place for the prophet to communicate with the Lord, at all times. In such case, it would makes sense to re-dedicate one of the former Holy of Holies in one of the original Pioneer Era temples—Manti, Ogden, or St. George. Or one of the other Wasatch Group of temples—West Jordan, Mount Timpanogas, and Provo come readily to mind. Regardless of where the Lord instructs His Church to move the Holy Place to, I'm quite sure it has been taken into account, and is operating at this moment.