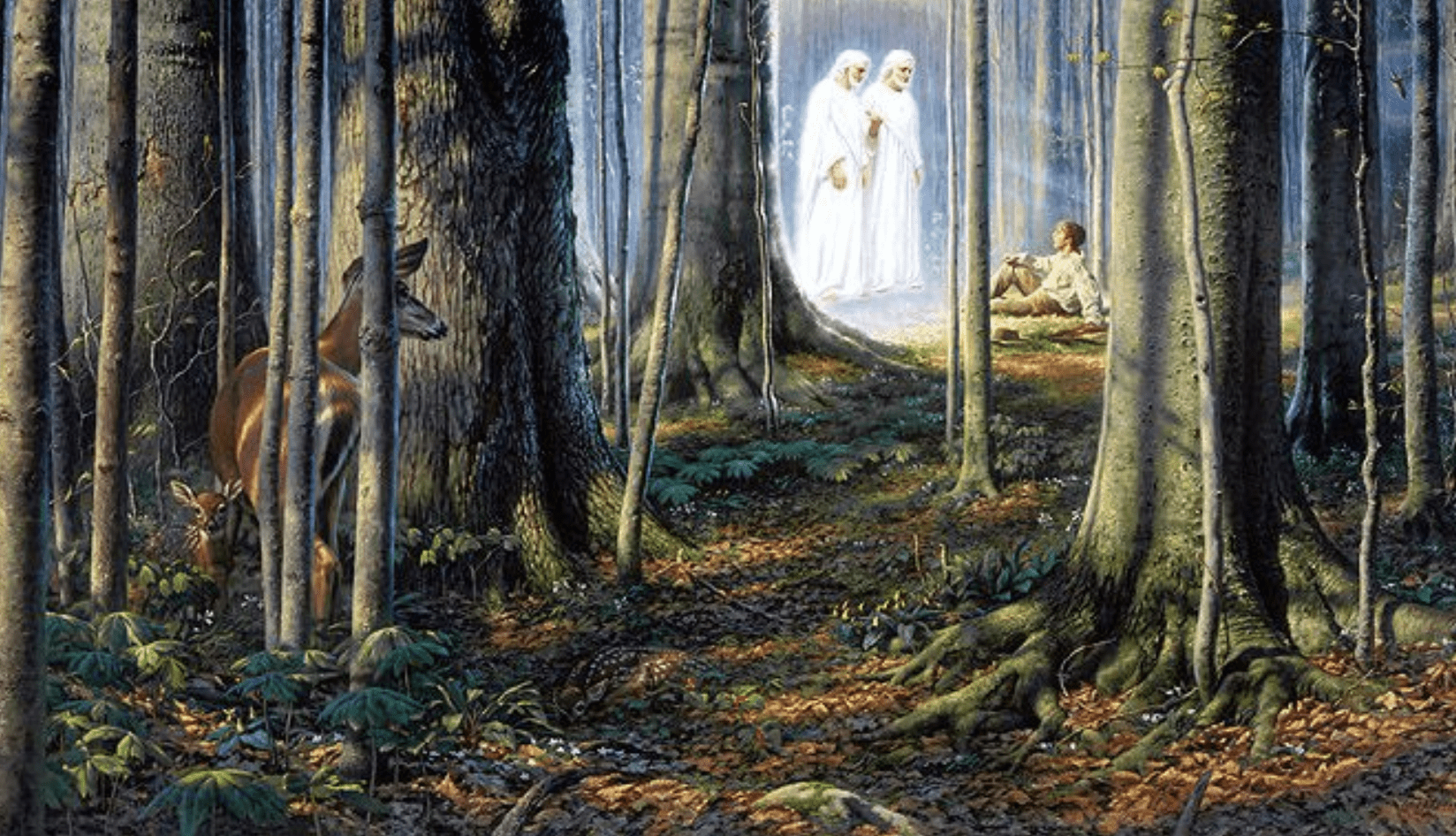 Cover image: “Joseph, This Is My Beloved Son. Hear Him!” by Leon Parson.

Our message to the world can be summed up in two simple words: “God speaks!” The First Vision establishes the principle of revelation in our dispensation. Every doctrine and principle that we as a people have been commissioned to take to all nations, kindreds, tongues and peoples, across the earth, have come to us by direct revelation. Most of the objections to the message of the Restoration reduce themselves to the simple refusal to accept modern revelation—our sincere declaration that God has once again appeared and spoken to prophets on earth. “To downplay the First Vision is to undermine the very foundation of our faith” (see Joseph Fielding Smith’s thorough treatment of this point, in his book, Here We Stand, Deseret Book, 1995).

On at least five separate occasions, the Father and the Son appeared to Joseph Smith, and others. Here is a brief description of those visitations.

1. Spring 1820 (Manchester, NY, in the “Sacred Grove”). This is the “First Vision.” Of this experience, Joseph wrote: “When the light rested upon me I saw two Personages, whose brightness and glory defy all description, standing above me in the air. One of them spake unto me, calling me by name and said, pointing to the other—This is My Beloved Son. Hear Him!” (Joseph Smith-History 1:17.)

2. 3-6 June 1831 (Kirtland, Ohio, at a schoolhouse on the property of Isaac and Lucy Morley). During a meeting of the Church held at the Morley property, Joseph Smith, Lyman Wight, and Harvey Whitlock saw a vision of the Father and the Son.

Levi Hancock recorded: “The Fourth of June came and we all met in a little string of buildings under the hill near Isaac Morley’s in Kirtland, Geauga County, Ohio. Then we all went to a schoolhouse on the hill about one fourth of a mile ascending nearly all the way. The building was built of logs. It was filled with slab benches. Here the elders were seated and the meeting was opened as usual. Joseph Smith began to speak, he said that the kingdom of Christ that he spoke of that was like a grain of mustard seed was now before him and some should see it put forth its branches and the angels of heaven would some day come like birds to its branches just as the Savior had said. Some of you shall live to see it come with great glory. Some of you must die for the testimony of this work … Joseph Smith then stepped out on the floor and said, ‘I now see God, and Jesus Christ at his right hand, let them kill me, I should not feel death as I am now’” (Autobiography of Levi Hancock, typescript, BYU Special Collections, p.32-34; see also Levi Hancock, Journal, BYU Special Collections, 33).

A Seventy named Zebedee Coltrin recalled: “[When] Lyman Wight was ordained a High Priest, Joseph told him he should see the heavens opened, and after he was ordained he stood on his feet and testified that he [Lyman] could see the heavens open and Jesus standing at the right hand of God. Harvey Whitlock was ordained next with the same promise but after his ordination, when standing on his feet, he seemed paralyzed. His mouth was drawn into the shape of an italic ‘O,’ and his arm was stretched out as if nailed to a cross. Joseph rebuked the power that had seized him, and it left him, when the heavens opened to him and he testified as Lyman had done, that he saw the heavens open and Jesus standing at the right hand of God the Father. This was the beginning in our day of ordinations to the office of a High Priest (“The Papers of Zebedee Coltrin,” in E. Cecil McGavin, The Record of the Spanish Fork Branch (29 April 1866 to 1 December 1898), LDS Church Archives, Salt Lake City, Utah, 250-51).

Church historian John Whitmer also wrote about this occurrence and said that “The spirit of the Lord fell upon Joseph in an unusual manner … He saw the heavens opened, and the Son of Man sitting on the right hand of the Father making intercession for his brethren, the Saints. He said that God would work a work in these last days that tongue cannot express and the mind is not capable to conceive. The glory of the Lord shone around” (F. Mark McKiernan, An Early Latter-day Saint History: The Book of John Whitmer (Independence, MO.: Herald Publishing House 1980), 67).

3. 16 February 1832 (Hiram, Ohio, at the John and Mary Johnson home). While working on the Joseph Smith Translation of John 5, Joseph Smith and Sidney Rigdon were shown a vision, which is now recorded in D&C Section 76. There were about a dozen others in the room, and the vision lasted for several hours. The heavens were opened and they saw a grand vision “concerning the economy of God and his vast creation throughout all eternity” (Joseph Smith Papers, Documents, July 1831-January 1833, 183). The Savior appeared to them (D&C 76:14), and they recorded: “And we beheld the Glory of the Son on the right hand of the Father, and received of his fulness; And saw the holy angels, and them who are sanctified before his throne, worshiping God, and the Lamb. And now, after the many testimonies which have been given of him, this is the testimony…which we give of him: That he lives! For we saw him even on the right hand of God; and we heard the voice bearing record that he is the Only Begotten of the Father” (D&C 76:20-23).

During the vision, “Joseph sat firmly and calmly all the time in the midst of a magnificent glory, but Sidney sat limp and pale, apparently as limber as a rag, observing which, Joseph remarked, smilingly, ‘Sidney is not used to it as I am’” (in “Recollections of the Prophet Joseph Smith,” Juvenile Instructor, May 1892, 303–304).

4. 18 March 1833 (Kirtland, Ohio, in the Newell K. Whitney Store, during a meeting of the School of the Prophets). In Kirtland, during the winter of 1832-1833, the Lord directed Joseph Smith to organize a school to prepare the brethren to serve missions, and to train them in all things pertaining to the Church and the gospel. The Prophet officially organized the First Presidency and the event was accompanied by revelation: “I exhorted the brethren to faithfulness and diligence in keeping the commandments of God,…with a promise that the pure in heart should see a heavenly vision; and after remaining in prayer, the promise was verified…Many of the brethren saw a heavenly vision of the Savior, and concourses of angels, and many other things, of which each one has a record of what he saw” (History of the Church, 1:334-335).

One particular morning, the Prophet asked the brethren to come fasting, having washed and wearing clean clothes. During the meeting, a marvelous manifestation of the Father and the Son occurred.

John Murdock (whose twins were adopted by the Prophet Joseph and Emma, after his wife, Julie, died during their birth) recorded what he experienced: “During the winter of 1833 we had a number of prayer meetings in the Prophet’s chamber [in the Newel K. Whitney store]. In one of those meetings the Prophet told us if we could humble ourselves before God, and exercise strong faith, we should see the face of the Lord. And about midday the visions of my mind were opened, and the eyes of my understanding were enlightened, and I saw the form of a man, most lovely, the visage of his face was sound and fair as the sun. His hair a bright silver gray, curled in most majestic form, His eyes a keen penetrating blue, and the skin of his neck a most beautiful white and he was covered from the neck to the feet with a loose garment, pure white, whiter than any garment I have ever before seen. His countenance was most penetrating, and yet most lovely. And while I was endeavoring to comprehend the whole personage from head to feet it slipped from me, and the vision was closed up. But it left on my mind the impression of love, for months, that I never felt before to that degree” (John Murdock Journal, typescript, p. 13).

Years later while living in Utah and speaking to a group of High Priests in Spanish Fork, Zebedee Coltrin recounted his experience: “I saw a personage passing through the room as plainly as I see you now. Joseph asked us if we knew who it was and answered himself, that is Jesus our elder brother, the Son of God. After the vision closed Joseph Smith told those present to again resume their former position of prayer, which they did. Again I saw passing through the same room, a personage whose glory and brightness was so great, that I can liken it to nothing but the burning bush that Moses saw, and its power was so great that had it continued much longer I believe it would have consumed us. After this personage had disappeared from the room Joseph Smith announced that the men had seen the Father of Jesus Christ.” Zebedee Coltrin concluded his testimony by saying, “I saw him.” (Zebedee Coltrin, High Priests Records of Spanish Fork, 5 Feb 1878, LDS Church Archives.) He added: “The appearance was so grand and overwhelming that it seemed I should melt down in His presence, and the sensation was so powerful that it thrilled through my whole system and I felt it in the marrow of my bones” (Salt Lake School of the Prophets, 3 Oct 1883, p. 60, LDS Church Archives).

After this vision closed, the Prophet said to those in the room, “Brethren, now you are prepared to be the Apostles of Jesus Christ, for you have seen both the Father and the Son, and know that They exist and that they are two separate Personages” (Salt Lake School of the Prophets, 3 Oct 1883, p. 60, LDS Church Archives).

5. 21 January 1836 (Kirtland, Ohio, in the Kirtland Temple). The week following the dedication of the Kirtland Temple, ancient prophets Moses, Elias, Elijah, and the Savior appeared in the Kirtland Temple to restore the authority to direct the gathering of Israel in these last days (D&C 110). But prior to the dedication of the temple, the upper rooms were used for various meetings from time to time. During one particular meeting, with about three dozen people in attendance, the Prophet Joseph recorded that after giving several annointings and blessings, the First Presidency “laid their hands upon me, and pronounced upon my head many prophecies and blessings … The heavens were opened upon us, and I beheld the celestial kingdom of God, and the glory thereof, whether in the body or out I cannot tell. I saw the transcendent beauty of the gate through which the heirs of that kingdom will enter, which was like unto circling flames of fire; Also the blazing throne of God, whereon was seated the Father and the Son” (D&C 137:1-3.) He added, “Many of my brethren…saw glorious visions also. Angels ministered unto them as well as to myself, and the power of the Highest rested upon us, the house was filled with the glory of God, and we shouted Hosanna to God and the Lamb” (History of the Church, 2:379-381).

Here I Stand is by Joseph Feilding McConkie.