VIDEO: President Nelson Shares His Witness of Christ from the Mount of Olives | Meridian Magazine 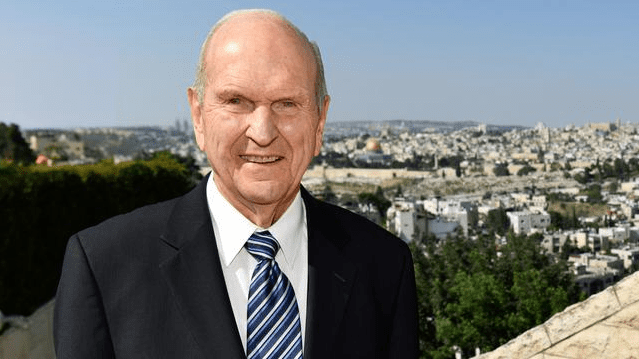 VIDEO: President Nelson Shares His Witness of Christ from the Mount of Olives

The 17th prophet and president of The Church of Jesus Christ of Latter-day Saints offers his witness to the reality of our Lord and Savior, Jesus Christ, in the faith’s “Special Witnesses of Christ” video series.

Standing on the Mount of Olives with Jerusalem behind him, President Russell M. Nelson shares his witness of the Savior. “As the Only Begotten Son of our Almighty God, Jesus was the only perfect man to walk the earth. In New Testament days, Jesus established His Church, built on the foundation of apostles and prophets.”

This video is in a series of testimonies of prophets and apostles called as special witnesses of the Savior beginning with the First Presidency and continuing with members of the Quorum of the Twelve Apostles.

See the video below:

Read the transcription of President Nelson’s words below:

Whenever I come to this great city of Jerusalem, I feel a renewed reverence for Him who made this land holy. Under the direction of the Father, Jesus the Christ was Creator of this and other worlds. He was Jehovah, God of the Old Testament. Jesus was the promised Immanuel, as prophesied by Isaiah.

More than 2,000 years ago, the Lord Jesus Christ was born in nearby Bethlehem. As the Only Begotten Son of our Almighty God, Jesus was the only perfect man to walk the earth. In New Testament days, Jesus established His Church, built on the foundation of apostles and prophets.

He healed the sick and caused the lame to walk, the blind to see, and the deaf to hear. He raised the dead. Yet He allowed His life to be taken to make resurrection a reality and eternal life a possibility for all humankind. It was here in Jerusalem that the Savior spent His final days in mortality.

I am standing on the Mount of Olives. Here at the base of the mount, Jesus came to the Garden of Gethsemane. He came to submit to the will of His Father and offer Himself as the sacrifice for the sins and weaknesses, the pains and burdens of all who had ever lived. In that garden, olives had been pressed under great weight to squeeze precious oil from the olives. In like manner, Jesus was literally pressed under the weight of the sins of the world. There He sweat great drops of blood, his life’s “oil,” which issued from every pore.

Not far from here is a hill named Golgotha, meaning “skull,” which symbolized death. There upon the cross, the Savior of the world was lifted up. He gave His life as part of His atoning sacrifice. His subsequent Resurrection, His triumphant victory over the grave, is recorded in holy writ: “But now is Christ risen from the dead, and become the firstfruits of them that slept” (1 Corinthians 15:20).

Because the Savior offered Himself as the infinite Atonement, you and I have the opportunity, the privilege, to be forgiven when we repent. We can also turn to Him for healing of our hearts, for strength where we are weak, and for help to do things we simply cannot do on our own.

By virtue of His transcendent offering, Jesus also gave us the gift of immortality and the opportunity for eternal life, proclaiming: “I am the resurrection, and the life: he that believeth in me, though he were dead, yet shall he live: and whosoever liveth and believeth in me shall never die” (John 11:25–26).

Another testament of Jesus Christ comes from ancient America, where God the Father introduced His Son to the Nephites, declaring, “Behold my Beloved Son, … hear ye him” (3 Nephi 11:7).

Modern prophets have also borne witness of Him, including this declaration by the Prophet Joseph Smith: “And now, after the many testimonies which have been given of him, this is the testimony, last of all, which we give of him: That he lives!” (Doctrine and Covenants 76:22).

I also declare that Jesus the Christ lives, that His Church has been restored to the earth, complete with His power and authority, with apostles and prophets and essential ordinances and covenants.

In a coming day the Lord will return to this Holy Land. Then “the glory of the Lord shall be revealed, and all flesh shall see it together” (Isaiah 40:5). Then He will offer these words: “I was wounded in the house of my friends. I am he who was lifted up. I am Jesus that was crucified. I am the Son of God” (Doctrine and Covenants 45:52). And then every knee will bow and every tongue confess that Jesus is the Christ.

I testify that He is the living Christ, our Lord and Savior, Exemplar, Redeemer, and Judge in the sacred name of Jesus Christ, amen.